I was talking with @giacomo and @filippo_carletti about the Accounts provider page and all around. We would like to improve it, by adding (or exposing) some useful features and make the resulting server configuration more flexible.

Please, join this discussion and provide your thoughts!

If the Realm becomes a separate parameter, a new AD forest could be provisioned with an invented nethserver.local realm or a separate third level domain, like ad.nethserver.org. This would help to solve many DNS configuration issues!

Moreover, the same parameter helps with existing AD environments and mail server configuration. It would be easy to configure predefined mailboxes like user@nethserver.org, and limit AD to its specific DNS zone.

Who comes from ns6 already knows this kind of configuration!

During the development of the upgrade procedure for ns6 we implemented some uninstall procedures! We can now generalize them and expose on the UI too.

An import_users script from CSV already exist in nethserver-sssd package. We could dump the users and groups lists to a CSV file when the accounts provider is uninstalled, so that they can be re-imported to a different one. Passwords cannot be migrated between LDAP and AD because are encrypted with one-way algorithms.

We must verify the new Samba release (4.6) compatibility. Some successful cases have been already reported with 4.4 and we are positive!

Change the IP of the nsdc Linux Container

A manual procedure is already documented. We can expose it on the UI!

Other improvements to Server Manager

There are many support requests that turn around the current Active Directory configuration. This is a brief list:

It seems like the Egg of Columbus to me.
We can tackle all our issue and brilliantly resolve them.

If the Realm becomes a separate parameter, a new AD forest could be provisioned with an invented nethserver.local realm

It would be easy to configure predefined mailboxes like user@nethserver.org, and limit AD to its specific DNS zone.

Could you explain this point better? Can I change my NethServer FQDN and see that change in my user list?

No, I don’t see any side effect. However, as @uliversal said in a previous post, recent guidelines from Microsoft prefer a third level DNS domain (i.e. ad.nethserver.org) over a non-existing TLD suffix (i.e. nethserver.local).

Could you explain this point better?

Today the choice of the machine FQDN is bound to the Active Directory realm name. If we split them and implement a Realm parameter it would be easy to configure a mail server. The machine FQDN is free from AD requirements and vice versa. Accounts names with @domain suffix can correspond to public email addresses by default.

Can I change my NethServer FQDN and see that change in my user list?

It could be possible. We want to fill any possible gap with ns6 features. Changing the FQDN is one of them.

As usual this is a gradual process: NethServer is a rolling-release distro and we just entered the v7 stable branch. I think the best is yet to come

Hi guys, I had just a little spare time and used it to come back to my favorite community.
Dont’t get me wrong, but “Service Pack” is so MS-like. I’d like “Improvement Pack”!

Beside that, it would be a great improvement to have all this in NS!

This is an initial mockup, please provide your feedback!

The current first choice is between “local” or “remote”. I want to change it because it leads to the most important consequence for the sysadmin: is it required user auth on shared folders? 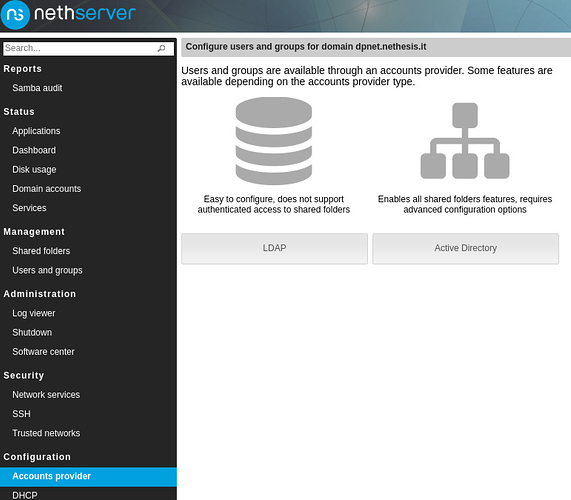 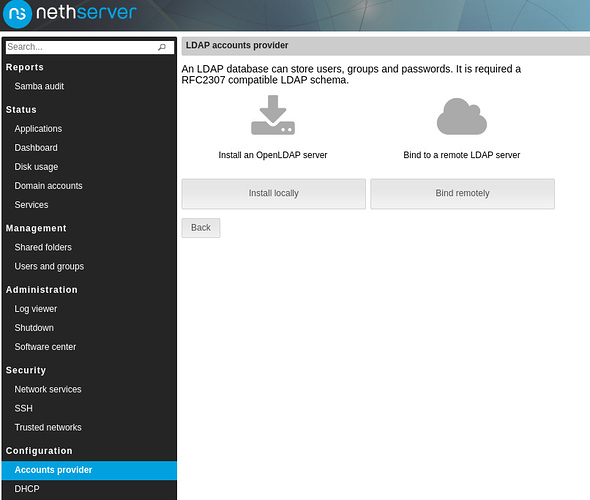 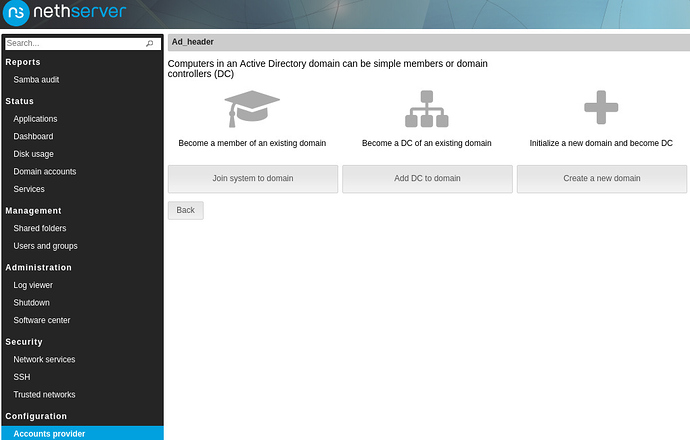 screen0 the button ‘active directory’ could it be named ‘samba AD’

UI enhancements are tracked by

This has been deferred: it’s a new use case.

The Ui improvement make it alot easier end clear to use, I like it!

there’s something in roadmap about this topic?

Shared Folder with OpenLDAP authenticator: where are the configurations? Support

Nethserver 7.3.1611 (rc4) I'm trying Shared Folders with OpenLDAP but, in dashboard, I can only set if the folder "is browseable" and the "Recycle Bin". I can't find where I can assign a read/write group, if the share is browseable by guest user, etc... like in NS 6.8 Thank you

As Far as I know, for technical reasons already explained in that discussion Open LDAP account provider has no options to set share permissions. We can’t support it and there isn’t a workaround, you have to install the DC module . Right @davidep ?
This thread is about account providers page, so I guess it’s not related.

There are some packages in nethserver-testing repo. We can move on to testing phase! /cc @quality_team

The nethserver-testing repository must be enabled. Please follow instructions on https://github.com/NethServer/dev/issues/5253#issuecomment-295299514 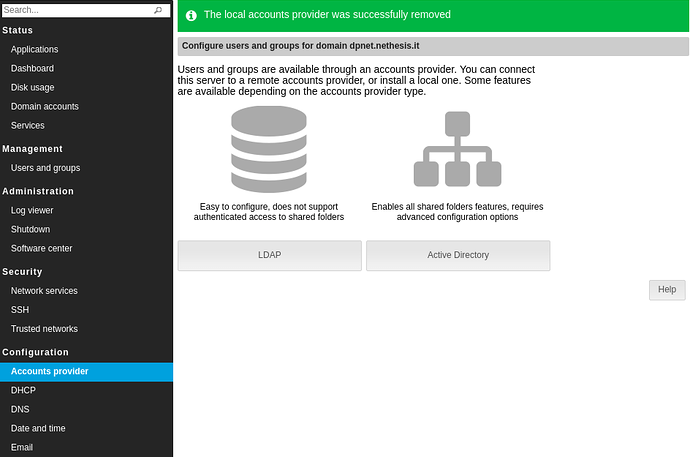 Please review also the headers, labels, texts, messages and inline help! It must be clear as day

Help us to test it and please report here your feedback

Two issues have been already discovered:

[edit]
Because i had allready a AD controller here on VM i had to unjoin it from the domain, from Software Center uninstall Account provider: Samba Active Directory and after that i have a posibility to go on