Tell me more about your NethServer installations!

Community IS share our experience, our tests and our know-how, I’m just wondering what kind of NethServer installation do you have. On your personal Virtualbox/VMware for testing? On a production environment? What kind of services do you have activate, how many users? Which kind of hardware used?
Don’t be shy, I simple personal installation is right too

I’ve got three NethServer Community Edition installations: in my living room (thanks to @mywife), in the google cloud (thanks to @etino) and at my company’s biggest client. I’ve got a very specific use for them in mind, alert me 24/7 when a couple of business critical Sles HA clusters are going down, and a long term goal, make my client decide to replace Tivoli ITM and IBM Director with Nagios and OCS.

Fact is, despite being HA clusters, those Sles will go down on a non-regular basis due to mysterious san hiccups The San Team hasn’t still been able to trace, and when they do go down I might or might not receive notification from the ITM agents monitoring the servers,“why ?”,“we don’t know yet”, The ITM Team tells me: they’re working on it. I know they’re not, both Teams, so I adapted: in a couple of weeks I had my sles box with Omd monitoring the sles clusters, sending me out trusty sms messages, 5 seconds after the damage; and while I was at it, monitoring the other 300 servers on my watch, 60 Oracle database servers, web sites, backups, and the kitchen sink too, you know you can get lost browsing the list of available nagios checks.

24/7 means I can be out of office when shit happens, and even though I’ll receive the sms, I might wanna take a look at the Nagios console first, maybe it’s defcon 1, all servers down: I can’t vpn into my client’s network using the smartphone, but I can replicate the inside Sles box Omd checks status in realtime to an outside Omd box on Aruba’s cloud listening at port 80, and point my nagios android app to that site. Right now I use Check_Mk, its gui interface is better than the flat standard nagios one, but still you have to like it and it’s some way to go to fully automate the host add procedure. I had no plans for inventory, then I saw OCS at the Partners’ Meeting, and decided to give it a go. 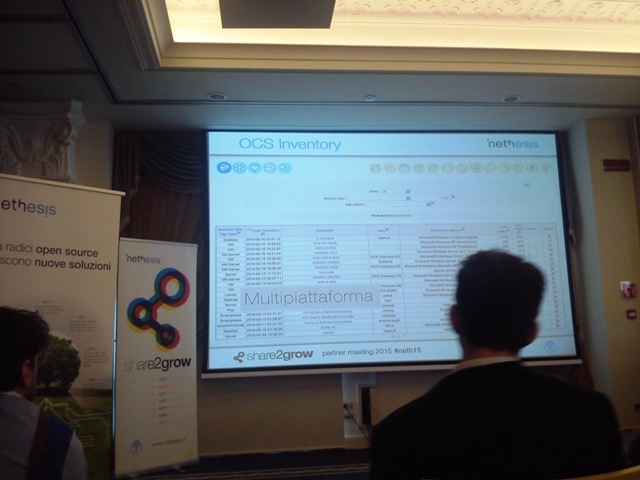 My plan is to drop sles+omd and replicate the present scenario, inside server --> outside server --> smartphone, on NethServer + Adagios + OCS, adding some kind of push notification system (what’sapp like) to replace the sms system.

Neth1, in the LivingRoom is on an dual proc Intel server built from scratch
Neth2: on Google, in a virtual machine in their cloud with the smallest hw configuration possibile to save the free 300$
Neth3: at the client’s site, is on a vSphere 6 farm made up of an IBM BladeCenter-E with 6 Ibm HS21 blades (they’re not on the vSphere 6 compatibility list, but they don’t know that and seem to work fine) and a fibre channel storage (IBM DS3400).

Woah, this is what I mean by BREAK THE ICE

I have it installed on my clients, and my office.

The NethServer my office has the following characteristics:

In my office I use for testing new modules and translations. OTRS to weigh further control cases my clients.

Actually I’m using NethServer at home with ownCloud to have my documents, pictures and songs always with me through ownCloud Android app installed on my smartphone and tablet or just accessing them from my office through Web UI. In this way I can increase privacy and reduce extra storage costs.
I have installed NethServer on VirtualBOX with 2 cores/2 GB RAM/40 GB HDD VM on my physical PC (Core Duo 2 E6300, 4 GB RAM, 3 TB HDD).

I’m kidding, my wife will never use ownCloud.

Woah… really??? Do you have quadcopter? Please open a new chat topic about this

guess there are a lot of drone-lovers around

I have it installed on my clients

How many installations? What size?

I am using NethServer as the LAN/WAN gateway at one of my company’s centers. This is a complex of offices used by 50-150 clients who connect to the LAN via both wired and wireless connections. NethServer manages 4 networks: LAN, DMZ (for video security cameras), Guest and WAN. Other servers on the LAN handle company-wide backups and file sharing.

NethServer provides me with WAN content filtering, firewall security and intrusion protection, and traffic/bandwidth monitoring. My primary gateway is a 4-core Intel-based box with 8Gb RAM and a 1Tb hard drive. Nothing fancy. I also run a hot spare clone NS server on an older Pentium 4 box, which I can swap for the main server in an emergency. We’re a non-profit, so we tend to do things as inexpensively as possible.

At two other similar company locations, IT staff are using PfSense to provide the same kinds of services I use NS for here. I’ve been evaluating PfSense and comparing it to NethServer. Without going into much detail, I’ll say that NS is far easier to set up and get running, far easier to understand, and the NS community is much more helpful to newbies. NS doesn’t offer all the features of PfSense, but it does exactly what I need it to do.

How many installations? What size?

Currently I have installed three NethServer, including my company.

In the future one will install more, several companies are seeking the security of your data and your employees’ web access.

My company incorporated in NethServer OTRS.

I’ve been evaluating PfSense and comparing it to NethServer.

Thanks @AZChas great and exciting overview!
A briefly comparison PFSense vs NethServer could be very useful for people who know just the former.

Woah… really??? Do you have quadcopter?

Nope @alefattorini
Quadcopter drones are also in my roadmap

Any other example!? Come one people! We have thousands of installations all around the world! Where are they?

Here, at IMAO SAS, we are using Nethserver for full and fonctionnal mail stack and some customs paranoid firewall rules.
I’m using NS at work. We are doing Aerial Data Acquisition.
Host computer has 4vCPU and 4Go of RAM. (virtual machine)
We are 40 peoples… so 40 emails boxes + lots of aliases + multidomains…

We have AD 2008 wich works as a file server and as a LDAP directory.
My goal was to use LDAP auth for the mail stack and the SOGo webmail.

Everything is working well.
I plan to use Nethserver in the futur to replace the AD. (if it’s possible because of Microsoft software we are using for pictures processing)

We are using NethServer as the LAN/WAN gateway in our company.
Hardware:
Pegatron Motherboard
Core i5
2 x HDD WD EARS 1TB
4 GB RAM
2 NICS (Onboard plus one PCIe)

I will deploy Nethserver also as Gateway LAN / WAN and DMZ (ERP system) at company headquarters.

I come from Zentyal which removed many modules in the new versions.

I liked the easy setup, stability and great community support.

After it is fully functional, will deploy it in other 5 buildings distributed in the country.

@pierre_bourdin @cronopio @alexcsilva thanks very much for your trust in NethServer! Real and great installations here, hope your sharings could be helpful for everyone!

After 1 month I’m betting we have more examples to share here, as I said

Community IS share our experience, our tests and our know-how, I’m just wondering what kind of NethServer installation do you have.

I am using Nethserver for mail and sharing (owncloud).

I am using Nethserver for mail and sharing (owncloud).

Good to know! Could you please be more verbose?

as the replies above? Talks us about hardware, users …