Nethserver v7-Beta 2 runs on a PI 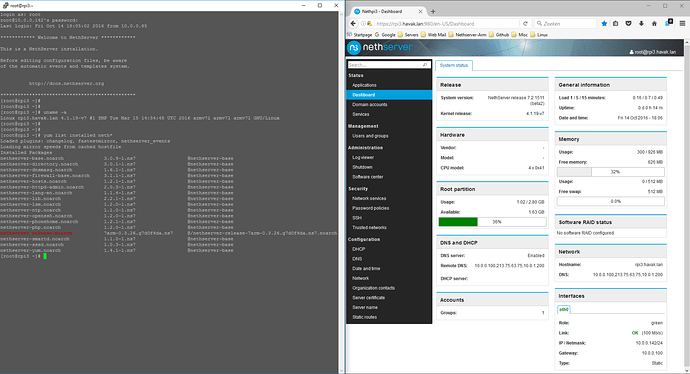 Mission for this week accomplished

Some release note’s to this Nethserver-7-beta2-arm-alpha1

@mark_nl those are great news!!! Congratulations!

when you want, let me know how i can update my repo so i can play with my pi 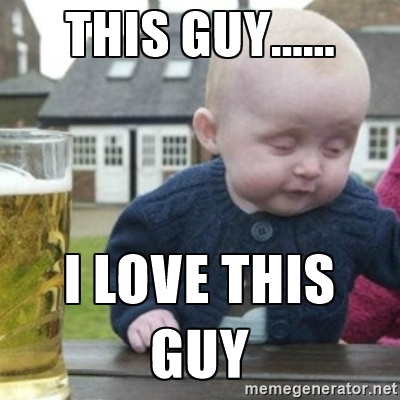 when you want, let me know how i can update my repo so i can play with my pi

Nice! Until now it only the base, I add a few app’s and ill make a new tarball with a repo.
I renamed it to nethserver-arm

I don’t have a Raspberry Pi to try it, but this is an
Amazing contribution!!!

I’d like to prep nethserver-arm-release and nethserver-mock to work out of the box,
is this base url oke?

Really cool, does this require RPi3 or is a RPi2 ok too?

is this base url oke?

It works on both, we still have to figure out the feasible applications/usage. I’ll like to hear your opinion once it is out here.

Well, sure thing, from my point of view, a RPi would be nice to have it work as an extension to a “normal” Nethserver server, since IMHO, I don’t think having your DHCP server, or whatever other crucial service that has to run h24 7/7, would be a good idea to run on a RPi.

What i mean is, just to make a few examples:

Nethserver has Zoneminder? Raspberry could be its cameras with the camera module

Nethserver has Guacamole installed? Raspberry could be a ThinClient with a OpenVPN client autostarting on boot, entering any remote desktop just with the browser

Nethserver has Asterisk? Raspberry could have it too and become a remote branch for small offices, connected over a IAX trunk to the main PBX

Nethserver has Adagios? Raspberry could be a remote probe to poll data from

These are just a few ideas, will be fun to play with it

Well, here it is:

In the ./nethserver-arm/7/updates is a hidden (.nethserver-arm-groups.xml) group file;
a simple and stupid script i use to create a (local) repo is:

These are just a few ideas, will be fun to play with it

Your ideas are great, but are those modules available in ARM yet? @nrauso

Some release note’s to this Nethserver-7-beta2-arm-alpha1,

Once the public repositories are up thx to @dz00te

The installation is described in our wiki : ns-raspi

Don’t forget to put some beers in the fridge first , it takes a while…
If you like to test (and a little bit of geek like me) you can open a second terminal and do a
journalctl –f to see the progress.

There is a lot of testing to be done;
until now only basic functional testing is done, especially:

The choice of packages available is mostly motivated by the fun-factor:

Why sould we do it? Because it’s possible!

@edi has good sugestion of feasible user cases;
but I have to say on my odroid-c2 (aarch64) it runs really snappy.

Once the public repositories are up

repositories are up, thanks again @mark_nl

just installed on a rpi2 as per wiki: all ok

if you have some ideas in how i can help in testing, let me know…

if you have some ideas in how i can help in testing, let me know…

EDIT: Oops
Forgot to mention openvpn, did no testing at all

IIRC you liked it the last time, so i’v put it in again.

i have no experience in creating rpm or the Centos build system…
Can someone point me in the right diretcion to start? (some how to, documentation, etc?

Nexcloud can be run without problem on a raspberry

Nexcloud can be run without problem on a raspberry

Good to hear! I’d kind of hoped (in time) you could test the nethserver-nextcloud app on v7-beta2-arm

i have no experience in creating rpm or the Centos build system…Can someone point me in the right diretcion to start? (some how to, documentation, etc?

Even better to read this!

Maybe I can help you, what are your intentions?