Continuing the discussion from Sugarcrm and Citadel groupware:

I would like to propose adding Citadel groupware to the Nethserver
I respect the opinion of some regarding the Sogo however Citadel is a lot more versatile and powerful.

Sorry but I don’t know this groupware at all. Can you add some details making a comparison between citadel and sogo? And maybe also webtop?
Which features do you like most?

I have been reading on the citadel website a while and it turns out to be one of the oldest groupware solutions around. And looking at the features and services: looks superb!
Now the interface itself: You can see it is deveoped LONG LONG time ago. The interface is very complete and even intuitive, but the looks… well have a look yourself: 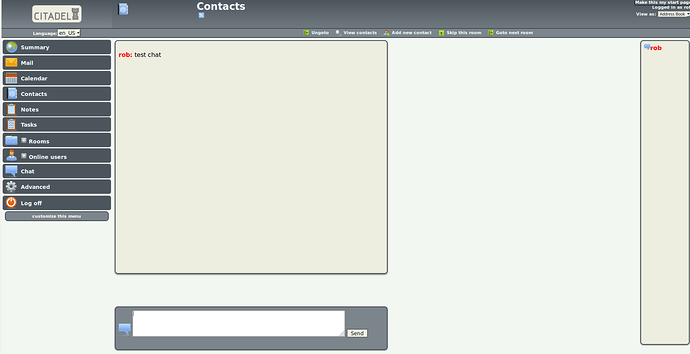 Again, it look very complete and robust, but the looks are… old?

btw, I set this up in docker in 3 minutes…

The featurelist is wow…everything I would need.
The look imo is not oldfashioned. It is not that win10style everybody thinks have to follow. Not really modern, but it is clear and complete.
I’ll try to install next week on a vm on ns7.

Do you still want me to compare? or are you already converted ?
I do not have a comparison for the products but I looked at both and immediately got attracted to the features of Citadel.
Let us forget about webtop is dates to 2011 and no more devs on it. I was surprised to see it listed on Nethserver.
I would agree with you on the look and the presentation of Citadel, yes it is not up to the Italian high style and design.
On the other hand I do not consider it ugly, better look would make you feel better but I would love to see it in action for its features and functionality the way it is.

Frankly I tried to install it on Nethserver and I failed, so I installed it as standalone on an Ubuntu machine to try . It is very good and I vote for it to be integrated into Nethserver.

Please do compare! And if citadel will not make it to the standard feature repository, it always can get a place in NethForge repository. Then anyone can choose what groupware to install.

Lets keep the discussion about citadel in this topic. If you think you need to comment on or pose your concern about webtop, do so in the split-off topic Concerns about webtop

I tried to install Webtop on my test Nethserver machine however I am not able to make it work.
It is installed properly but cannot access it.

I need that in order to compare with the installed Citadel instance I have.

Error
The proxy server received an invalid response from an upstream server.

Please ignore my earlier post, the problem was due to the fact that I was running Spreed webrtc on the same tomcat port 8080… my apologies for the false alert.

I was working on a comparison list however realized that we cannot compare the 2 products.
The Webtop4 is mainly an email server with extra features that comes along such as calendar sharing, public folders sharing and enterprise document access (this feature in specific is best handled with the Nextcloud)

As for the Citadel , similar to Webtop in addition to Notes, wiki and blog, stronger Group calendaring and scheduling (WebDAV, GroupDAV, and Kolab-1 compatible) , Built-in RSS Feed Aggregation, Support for push e-mail and mobile devices, Built-in full text index for fast searching , Multiple domain support (does not exist in Webtop), built-in integration with perimiter email filtering technologies such as Realtime Blackhole Lists (RBL’s), SpamAssassin, and ClamAV antivirus,
Important feature in Citadel : Server-to-server replication. Users in any number of domains can be spread out across any number of Citadel servers, allowing you to put data where you need it, and enabling infinite horizontal scalability.
Built-in instant messenger service I wouldn’t rate that high but still a nice feature
It provides its own implementations of these server protocols: IMAP, POP3, SMTP, ManageSieve, XMPP, Citadel.
It is 100% free open source GPL3, its codebase is written mostly in C. Where the Webtop is JAVA

With no offense to anyone I do not see Webtop as a competitor to Citadel. I would say that some people have the choice to make them work together with Citadel as the front end.

Thanks for your plee for citadel. I do think citadel has some powerful features.
We could take a next step and installing Citadel on a NethServer (7).
It would be awesome if you would try this and make an install howto.
The step after that would be creating a NethServer module for Citadel.

I am looking forward to your findings installing Citadel on a NethServer.

Thank you Rob,
I was experimenting the Spreed.me feature under Nextcloud. It works very well however Nethserver needs to do some preconfiguration to the Tomcat server port 8080 is conflicting with many services.
I guess the same problem I faced with Spreed.me would be faced with Citadel.

Since my Tomcat is disabled now, I will try to install citadel and see if it works then write a how to if I was successful.

I have tried Citadel before. When I say before, its like 2008-2009. Its a good email server, it was based off BSD but can be installed in Ubuntu when I tried it. I has an easy installation script and. It was then boasted to have a set and forget and was said to scale. However, the GUI is a lot to be desired, its pretty basic and the groups or meeting was called rooms.

If we are to consider, may I also request Zimbra (this has been requested before but I think due to how accounts are handled, it was not possible) in the comparison chart.

Tried to install citadel on ns7

Got access to login-page and could login with admin.

Authentication: build in, not ldap or AD!

Will play a bit with it and report.

as said before, zimbra can’t be installed on NS (like zarafa, for example) because it wants its own daemons…

about citadel, if it can’t be integrated with ldap (were it be openldap or AD) it’s quite useless

If no LDAP then I join my voice to Stefano, no point in integrating it.

During installation you can choose authentication. Choices are internal, ldap or AD.
Only because it’s the fastest way.