Here is a simple gimmick, easily addable to zabbix on NethServer:

A swiss railway clock, much better readable than the provided one.
This is based on:
http://www.3quarks.com/de/SVGUhr/index.html

Basically I stuffed the prepared SVG file into Nethservers html folder, and refer to that in the url. As Zabbix and NethServer are on the same server, this isn’t an issue, it would not even be if run of a different web-server…

A gimmick, but thought you might like it: The ÖBB clock or DB version can also be set, if you prefer a “Wiener” ambiente…

PS
I also use this im my Home Assistant setup (HASSio)…

Nice, I am going to implement it in next module release.

You can grab my customized one from here:

Zabbix. Contribute to Andy-Wismer/Zabbix development by creating an account on GitHub.

This can be placed - unpacked - in any web accessible folder. SVG isn’t fussy!
Refer to the individual html files, or directly to the SVG. 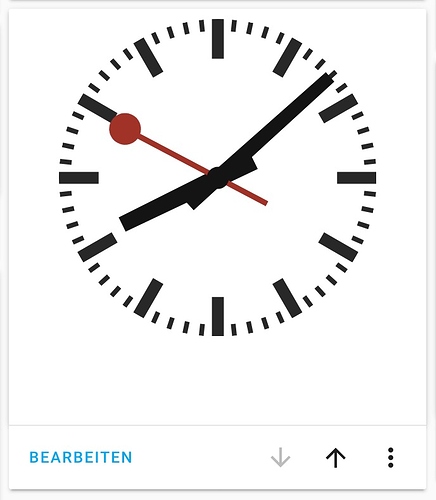 Hi For all who’d like to have a large analog clock somewhere on their Lovelace Interface (Kiosk, mode, “Houston Control” style screens…) how’s this for a first work: Plain Version: Swiss Railway Clock (SBB) inspired: The second hand actually...

Just received an email from Zabbix:

Getting closer to the next Zabbix LTS release. Zabbix 5.0.0beta1 version is out!

Then on the same email:

(Zabbix + Zammad): Zammad is a free open source, a fully-featured web-based ticketing system for helpdesk or customer support. This guide describes how to integrate your Zabbix 5.0 installation with Zammad and provide instructions on setting up a media type, a user, and an action in Zabbix.

I clicked the link:
https://www.zabbix.com/integrations/zammad?utm_source=email+marketing+Mailigen&utm_campaign=Mailigen&utm_medium=email

This guide describes how to integrate your Zabbix 5.0 installation with Zammad using the Zabbix webhook feature. This guide will provide instructions on setting up a media type, a user and an action in Zabbix.

It should be a nice mix !

What do you think about this ?

Zabbix can have a lot of Webhooks, depending on what and who uses what… 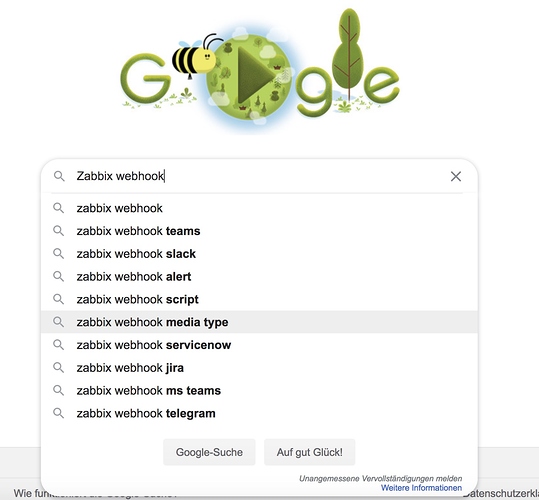 Jira is also an active subject here in this platform. 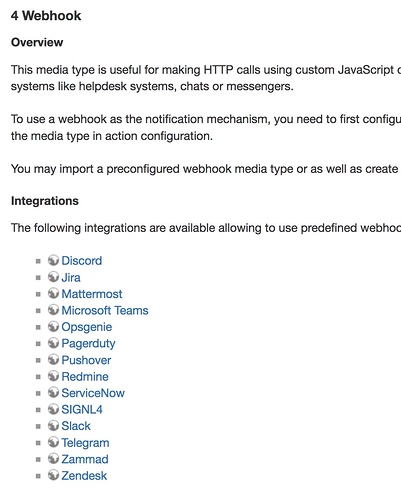 What do you think about this ?

Combining Zabbix/Zammad is a nice feature.
I assume preconfiguring both should be possible at least by editing the databases.
Should it be done automatically when both apps are installed or is there a reason to keep them separated?
What about integrating LDAP/AD to both Zammad and Zabbix so a member of the “support” group can access zabbix and zammad? Actually both apps run “next” to Nethserver.

Zabbix can have a lot of Webhooks, depending on what and who uses what…

Great! As regards Nethserver I think mattermost and even telegram are interesting for preconfiguration.

I don’t use them (yet), but I also can’t tell you what the weather will be like next week…

I think these are separate apps, so we may think about integrating them to Nethserver first.

It looks like Zammad need a lot of memory, so if it is included with a webhook like André wrote, maybe it will take less memory all together. I don’t know enough about that. But since it will be only with Zammad 5, we need to wait for the final release…

For LDAP/AD, I think that you already worked a lot on those, so if all is integrated together on a single NethServer it will be quite a feature for NS.

I am working on translation for Zammad as the fr_FR or fr_CA is quite awfull as it looks like it is directly from Google translation and a lot of it is missing. Zammad should take .po/.mo instead of .yml as WordPress - it will be much easier for translation. Also a child theme will be the greatest think to do…

Also, the “black” theme is very hard to read. Yesterday, I was looking at the theme replacement and I think it doesn’t have other than the default one and I think one have to play with the css which is quite bad as it will be overwritten by updates.

P.S. I should have place my Zammad comments on the Zammad thread.

Webhooking enables also using external / hosted services, or simply to connect to the app on the same server or installed in a VM right next to NethServer / Zabbix…

So a simple template integrated might be in order…
Mattermost & Zammad are clear candidates.

I’m not sure, but I think on a fresh 4.4 install, the templates are included.

So a simple template integrated might be in order…

I am afraid it’s not a simple template as in case of Zabbix I need to edit the database for changing the configuration.
I’d like to integrate all for maximum flexibiliy but I have to consider effort and simplicity (like 10 switches for enabling webhooks are not simple anymore) too. You are always able to do the configuration (3 steps) in the user interfaces.
I saw that many modern apps provide a lot of interfaces/webhooks, see matrix for example. Integrating them all is just not efficient IMO.
If we see that some addon is used/needed, I’m always open to integrate it.

I’m not sure, but I think on a fresh 4.4 install, the templates are included.

After all that time, Mattermost just hit me !

I would like it in combination with Moodle/Bigbluebutton to get a private video conferencing and collaboration system.
Mattherhost has a Bigbluebutton integration

In the current time it would be important for me to become independent from Facetime, Zoom, Whatsapp,… and the other proprietary systems.

Mattherhost has a Bigbluebutton integration

That’s great! Bigbluebutton is on the wishlist, just a matter of time I guess.

I think I really should have a closer look at Mattermost, seems they have a lot of interfaces to other apps.

Another possibility is Matrix Synapse. It has many integrations too but It’s work in progress.
Mattermost already is a base package.

After half a day I realize that te config of the database in the /var/lib/pgsql/12/data/pg_hba.conf have to be like this:

“local” is for Unix domain socket connections only

local all all peer

The contrib is working, I´ll will probe the Zabbix 5.0 in the testing environment this week.

Check out the new package for testing.

Thank for your Zabbix Repo and Package. I hope you can explain how to install the corresponding agents for different servers.

For a Nethserver based Centos System I have done:

But I have no idea how to install the agent on Debian based systems like Proxmox or others.
Could explain please how to find the right package source or installation process?
Thanks a lot, Marko

Zabbix agent packages are available for many distros, install steps are included. For the agent you only need the repo download, the agent installation and enable the agent service.

Here is the Debian example, I use it on Proxmox too.

Shame on me…
I also found this site but I didn’t recognized the possibility to scroll down. I wondered about the pure listing w/o any anddintional content or interaction.
OMG… I am apparently really already in my sixties …