The Trouble In Calendars

I use Nethserver for My business, and a number of core functions of my business are powered by nethserver. I a glad.

we will also and have already began doing implementations for other organizations.

Generally speaking i have a huge problem with calendar, calendar system and calendar management.

We have Nethsever instance, which handles ldap users, has its own email users, with Webtop as the main calendar interface for that.
We also have NExtcloud deployed for that and so many other systems.
Webtop has a calendar, and enxtcloud has a calendar. when a calendar invite is made to eamil, someone can either use any, buildint mail to nextcloud calendar, or webtop mail to webtop calendar.

We then have a separate coprtae mail server, running on Zimbra, separate from the rest, it host many other domains owned by the compnay with their emails.
zimbra also has a calendar.

On phone most people have google calendar, and on computers, (windows) microsoft calendar app is king.

All the corporate emails are managed and handled by outlook office. so notifications for calendar events, are imported to outllook.
We have some crm solutions, but they moslty integrate with google calendar.

How does one manage all this calendar menace into one aggegated system, that no matter where calendar is added, its synced everywhere i would like.

I have tried so far to some extent but i fall short in many ways.

Use only one calender!

It’s akin to using an ERP system with two storage options (Maybe a PROD, the other TEST).
Some users may hit the TEST (by accident?), the simple result is that your ERP gets split up, half the bookings in one system, the rest in another. Merging the two sometime later needs a lot of care!!!

Generally speaking i have a huge problem with calendar, calendar system and calendar management.

The problem here is that we don’t have (at least as far as I know) software for a calendar server the way that we do for mail and (to an extent) contacts. We do have what seems to be a decent client/server protocol in CalDAV, but much of the software that implements it on the server side (Nextcloud, WebTop, sogo) also wants to be a client, none of it is willing to act as a client to a different server, and none of it is willing or able to connect to a shared calendar database. The best answer I know of (and it isn’t very good, IMO) is to only use one. Remove the Nextcloud calendar app. Don’t install more than one groupware application. Etc.

The best answer I know of (and it isn’t very good, IMO) is to only use one. Remove the Nextcloud calendar app. Don’t install more than one groupware application. Etc.

yes I think you could fire the CTO

You might not be aware of this, but our user oneitonitram (Martin spelt backwards, see the last bit!) happens to be in the provider business, and he’s trying to bring european standards in education to the less fortunate in africa!

It’s a tough job, but I approve of it morally - and actually helped him a few weekends ago to set up his Monitoring with Zabbix. That was tough, I’ve done a lot, but even I have never setup monitoring for a distributed, hosted Provider environment.!!!

He does post a lot, has his shares of issues, but I support the case…

Webtop and sogo seem to support caldav/web calendars as client. 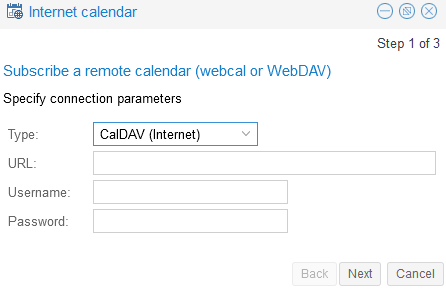 What about using a calendar server and configure Webtop/SOGo to use it?

How to use CalDav to sync Calendar between WebTop and Thunderbird/Android? WebTop

What about radicale or davical? Tested them long ago but they worked… https://wiki.davical.org/index.php/RPM/Red_Hat https://admin.fedoraproject.org/pkgdb/package/rpms/radicale/

Why not point them to NextCloud CalDAV?
(After exporting and reimporting the data…)

NextCloud’s CalDAV implementation is very solid, I’m using it for years on several sites. Heck, my Home Automation even grabs my next 5 appointments and the next 10 public holidays and displays the info in my Home Automation instance…

Why not point them to NextCloud CalDAV?

To be completely “groupware independant” with an own calendar server but you are absolutely right. Using one of the groupware servers may work too and is less effort.

This would need serious testing, but from my own experience with Nextcloud’s CalDAV implementation, I’m inclined to say it works…

I have been doing alot of tinkering, testing and playing around with multiple calendars, so as to make sure, no matter where an action happens, we have a single pane of glass to view the calendars.

What CalDAV and CardDAV Server doe Nethserver use?

AFAIK at least NextCloud uses it’s own CalDAV and CrdDAV servers (built in).
Not sure, but I think Webtop and SoGo (SoGo at least has CalDAV by it’s own.) do too.

yes nextcloud and SOGo run their own caldav/cardav server, webtop is a client IIRC. Theoretically you could have one centralised server and others act as clients, but due to the human factor, you can be sure that it won’t never work.

Maybe the best way is to use one caldav/cardav and disable all others, either internally or by disabling the apache web folder (caldav/cardav is not more than a web folder where we download/push information)

Inside webtop, there are times someone receives an email, with calendar content. if you select add to calendar its added to webtop calendar. but now, because you did not select which calendar to save int, it does not appear in nextcloud. Similar problem is there in nextcloud.

No, WebTop is mainly a CalDAV server, not a client.
It also has the possibility to synchronize external CalDAV resources, but they will be readonly and synchronized with a timer that will rebuild from scratch.
Don’t know if SOGo or NextCloud can act as CalDAV clients.

i tried using nextcloud as a client’s only, but it seems its not possible, it can only create its own calendar.

if those were possible, then my problem would be fixed. and i will write a very wonder instruction on how to unify calendars, based on the stress i have experienced, and the multiple issues i have faced so far, and how i was able to resolve.

Does anyone know if there is an open source self hosted solutin like any.do calendly
i would like to try something.

I have been through this deliberation myself, as I hinted in my own thread Sogo vs WebTop (for contacts, calendar etc with DAV)

In an ideal world there would be a best-of-breed in each category which would be standards-based and also open enough to integrate with other systems based on standards. Any in fact there are a number of platforms which exist which we could probably use together well enough to have an integrated set of tools. But then we add another requirement and suddenly find that a platform which satisfies that very well drags along a bunch of other things which cause duplication and then the discussion here arises.

I was thinking along the lines of setting myself up a NethServer with SOGo and Postfix+Dovecot (or whatever) and Roundcube and FreePBX (or, now, maybe a FreePBX or alternative alongside it, based on a comment made in FreePBX usability) and using NethServer’s own DAV and Samba for file access. NethServer bring together a bunch of services which are good at one or two things and wires them together. And thereby I’d have good solutions for calendar and contacts and mail which are well integrated with one another and also shared storage. And they’re standards-based so I have a whole selection of clients on desktop and mobile.

But if I want a nice capable web-storage front end then that seems to be NextCloud (OR WebTop, or AND WebTop) and that’s a whole groupware (or two) which drags in duplication and then these questions start.

I dare suggest that if only there were good stand-alone solutions (but ones which are open to deep integration) for all these functions, it would be much easier to solve this problem. It starts from the fact that NextCloud and WebTop and so on, having been built specifically to integrate, and also to add on functionality beyond the standards, prefer working with themselves, and are not completely modular and therefore don’t make it easy to stop using part of them and plug something else in instead. (long sentence, sorry)

This is similar to the inner-platform effect. Each of us could build our own groupware with whatever functionality we want and we’d have to deal with all the details. We’re talking about wanting to create something modular, but we have to use standards to tie the parts together, and then we have to put so much work into just making sure that all the integrations work… Rather than just solving the original problem we just make a new toolkit for the problem, easier to use but with less flexibility than the original tools. Most of those groupwares out there aren’t written from scratch - they solved much of the problem by just choosing one existing tool for each function and hardwiring everything together. Now we like what they did but we wish that we could unplug the bits from one another

NethServer does offer three different Groupware packets, and all three AFAIK do not use the standard CalDAV or CrdDAV “referential” servers in their code, but rather re-implemented them, using their own code or adapted from somewhere else.

There is plenty of overlap, it IS a bit like comparing Browsers (Firefox, Chrome, Safari or whatever). If it’s not a plug-in, it’s almost impossible to “transfer” a feature from one browser to another. And not all are open source.

So it basically comes down to a choice - your favorite browser. You may have more than one, but the mainly used one.

Same for Groupware, you need to choose…

I mean, it’s NOT impossible to say create a cron script to sync the database entries for calenders between WebTop and NextCloud, the same would work for Adressbooks. BUT: Sharing would need to be reconfigured on the “other” platform, or adapted again with a script, on the fly.
And this could break with updates on either side - a real headache!

20 years ago, I actually wrote a programm, using a database (access/mysql) to Sync Groupware data between platforms. It covered: MS Outlook, Novell Groupwise, Lotus Organizer and Psion Organizer… It worked, but supporting it - even if only for myself - was a headache and not worth it!

That’s when I started looking for alternatives, I didn’t want to go the Exchange route anymore…

My choice has been NextCloud, for several years now. Before that OwnCloud…
I like the fact that almost any CalDAV or CrdDAV client will work, on several platforms.

I grab my calender and public holidays and display them on my Home Automation: 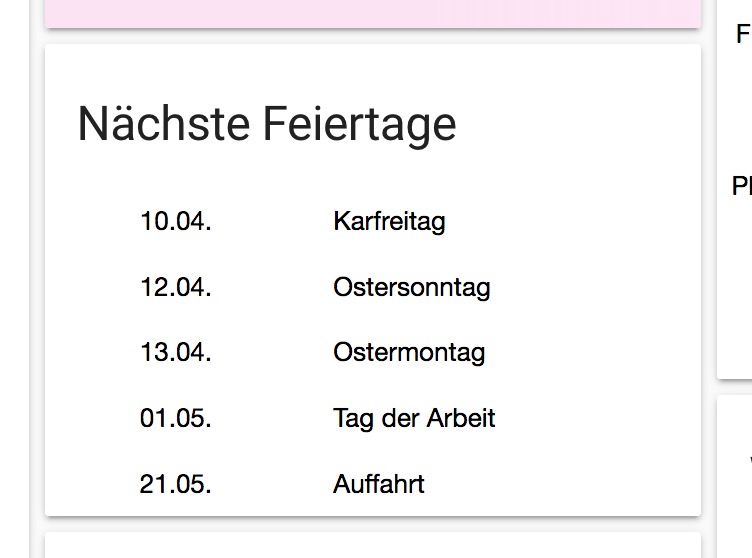 @ylavi I would say, i have a much more complicated setup myself, both for me and my organization.

For your case, simple. just use nextcloud and webtop. installa the groupware in nextcloud, set the nextcloud calendar in webtop. you will be able to view the webtop calendar inside webtop, but not to write to it.

Make next cloud your default calendar. Add it to google calendar, and add it to your windows calendar. and bum, you are good to go…

I will at a later stage write a tutorial on some of these aspects based on my findings, at the moment, i am still in the process of research.

If you need on point assistance @ylavi i can help you get everything integrated exactly as you would.
For my case, it a different ball game alltogether. and i do not want to spend tons of money to achieve what i want using paid solutions.