NS with KVM and libvirt or proxmox?

Before I start I’d like to know if I understand it right that KVM VMs and containers with apps can be mixed. So, separated services of Nethserver would run as apps in a container?

Right, you can take a template container (There’s plenty available) for a standard Centos 7 container
That takes a few secs (!)
Fire that up and install NethServer according to your requirements. There’s a howto on that on their site…
http://docs.nethserver.org/en/v7/installation.html#install-on-centos
Use Containers for NethServer App or direct Apps on any Linux of your choice. I’m running a FOG-Project based Imaging solution on a base Centos Container.

The MAIN NethServer installation, the one with the AD, I’d definetely put that in a KVM based box, due to the fact that the AD itself is a further virtualisation in a container inside NethServer. As a KVM, the AD works very well.

Do you spread the services over several “machines” or do you have all NS services installed on one vm / container app?

Depending on the anticipated load… It’s easier to troubleshoot if seperated, and users can take it easier if just One service is down, not the whole network!

I’m also a bit confused about the storage strategy. Right now we have one physical server with two 650 MB hard disks in a software raid. Attached to this server is an “Icy Box” raid with two disk and a capaciy of 2 TB. Exept for the boot, swap and root partiton most of the internal raid holds together with the external raid a LVM volume group with all image and data volumes. What will be the best practice to have these resources repartitioned by Proxmox?

ProxMox doesn’t really support software raid, but if you keep your VMs on a NAS, that is in itself redundant (raided) then that’s ok. Software RAID does work on Proxmox, your mileage may very in setting it up…
I wouldn’t bother. Hook up the second disk from time to time and make a dd image to the second disk, hooked up via USB…

The NAS is the primary focal point for your VMs. They “live” and exist in there. So obviously you NEED somewhere else to keep Backups of these important files - a Backup on the same physical Disk is not really reasonable. If that disk crashes, your data and backups are gone…

So you need a second NAS. Get a bit a better one and use the present NAS as Backup. Later. For now you can use the NAS for both, but make saves manually on an external disk or whatever!

ProxMox out of the displays two containers, which are basically folders on the local disk. These can be used for anything, but you get no redundancy or Live migration. You CAN use Live Backup to migrate these VMs or Containers any time in the future, as soon as your Storage (NAS) suits your plans.
Here are the Storage options in ProxMox. The two lowest, with local in the name, are just that, local storage.
This is what you can add on for storage: 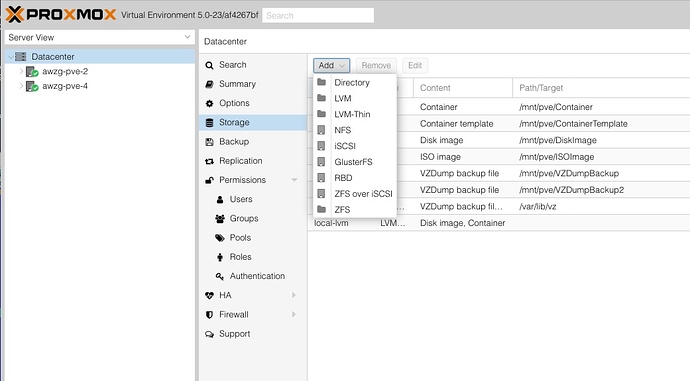 Proxmox specifies 5 different items which can be in a storage, here’s my setup: 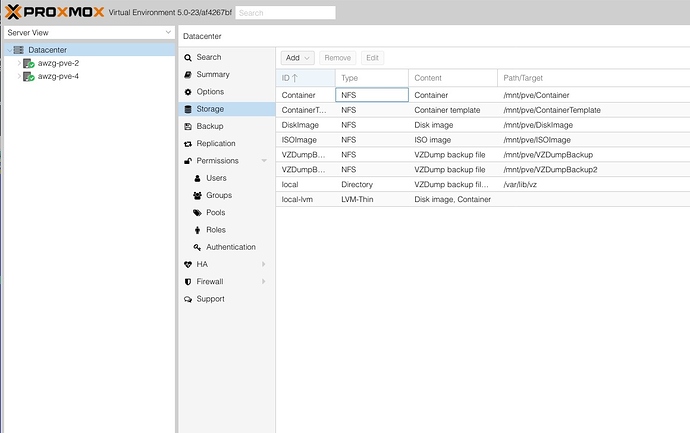 ProxMox doesn’t really support software raid, but if you keep your VMs on a NAS, that is in itself redundant (raided) then that’s ok. Software RAID does work on Proxmox, your mileage may very in setting it up…
I wouldn’t bother. Hook up the second disk from time to time and make a dd image to the second disk, hooked up via USB… 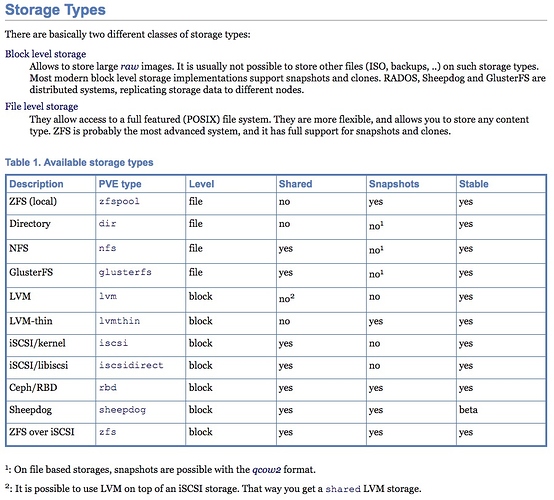 You’re quite right here. In future we’ll use the german plattform for such stuff. I just had a feeling using german might assist in confidence to try out ProxMox.

Did you get to try it out yet?

I just had a feeling using german might assist in confidence to try out ProxMox.

In this case, it is fully ok.

Did you get to try it out yet?

I fetched a hard disk today to setup an old pc as NAS box for Proxmox and will hopefully migrate my ESXi today/tonight. Backups are already made. I’ll give you a report asap…

Like I mentionned above - Proxmox will work quite well stand alone for starters. Add in your NAS as it gets ready!

You anyway can’t integrate it during setup, only After setup, reboot and using the web interface!

So do things side by side, while the cd installs on NAS-PC and Proxmox, enjoy a nice Wiener Melange or whatever beverage of your preference…

I still have two things running on my home VM ESXi, I’ll also attempt to migrate them later this evening or night. They’re not important. One is my last Win98SE and the other is OpenBSD - might go for a reinstallation rather than migration, seeing that OpenBSD also works with VirtIO.

I still have an old Windows NT 4.0 VM. Do you think I can migrate it to Proxmox? Would be just for fun…

Windows I’ve done until Win2000 (Server and Workstation). I also have an archived WinNT40 Workstation running in ESXi.

VirtIO isn’t available, those only support back to Win2000.

Things look good, those confirmations are for older KVM versions. You can use Intel e1000 for NT, finden the right driver may be an issue (There were so many sub-versions of an Intel EE Pro 1000 Network Card).
Grafik can be cirrus based according to this:

Can’t use my old NT4 any more, the disk containing that image died a while ago. Remember those clicking noises, in the days before ssds? ;-(

Maybe later in the forum…

I am using proxmox, it does support zfs and snapshots.
But i had to manually do a lot of stuff to get it working how i wanted.
Any idea if zfs would be supported soon on Nethserver ?

The fastest I have done: WinNT with the whole C-Disk in a RAM-Disk on my Mac.
Never seen NT boot up soooo fast!

But i had to manually do a lot of stuff to get it working how i wanted.

Not what I want, especially since updates work so well in ProxMox. On a major update, a hand done ZFS is bound to screw up.

I dont think we should go offtopic, but you could message me about what you think it could go wrong ?

The thing is, ProxMox is sooo stable, and so are their updates. So I get into the habit of updating the hosts…
As long as everything is “out of the box”, nothing will screw up, ProxMox handles even major upgrades well.
However, I’m quite aware I might have to redo the UPS (NUT) configuration, also the SNMP stuff I made to allow remote monitoring.

Easy as it is, I don’t want even the Zabbix Agent running in my ProxMox. As close to the standard as possible.

There a quite a few things which can screw up, like a change in basic function of a ZFS library…
As long as you’ve got backups, and basically know what you’re doing, things should go fine.
But don’t give Murphy a chance to screw things up.

A good friend of mine asked me three years ago to help him set up a Windows2012 server, with SQL-Server and Exchange 2010. I stipulated that at least every three Months he should shut down the VMs and copy the Image over to the NAS (All was running on the Server, NAS only for Backup). That besides the usual Windows / Exchange Backups containing current data.

He never did that, the last image “off” the server is from December 2014…
And last week the whole thing crashed, Windows would boot up VERY slowly, the AD seemed f*cked and Exchange wouldn’t start up.
Even worse, despite a reboot of the VMWare ESXi Host, he couldn’t copy the files over to the NAS…
It’s running - for now - but we can’t make a save or backup of that sucker!
So we’ve got the data, but no system which can use that other than what’s running now on the ESXi.
–> We’ll know more on Monday… ;-(

That’s also the reason this particular client will be moving to ProxMox, so that doesn’t happen again.

It’s running - for now - but we can’t make a save or backup of that sucker!

Just some ideas:
If you can connect to this Windows system, you may use a tool like Drive Snapshot to push a system image to an external Windows share. Then you may setup new VM, boot with a PE system and restore from image. Downtime is minimal, as halt system A and boot system B.

Maybe an ubuntu live CD/USB may help to copy vms/data from vmfs filesystem to where you want:
http://ubuntuguide.net/how-to-mountaccess-vmware-vmfs-filesystems-in-ubuntu-linux

If ESXi and VMs have to stay online you may take a snapshot of the VM, copy the original disk to NFS share and delete the snapshot. You may then setup a new VM with same settings and the copied disk.

Thx for the ideas, we’ll try out a few…

Had a look at the container-templates in proxmox and tried one out? Centos7 or Ubuntu… Its soooo fast!
My first Proxmox test was also an old PC - without even NAS.
It had only 4 GB RAM… I then installed Win7 Ultimate - and was really impressed, at how fast that went - on really old, crappy hardware…

Didn’t take long, and I flattened the first ESXi…

I must say, I also like the proxmox community and wiki. Lots of info out there…

One stupid question: should the Proxmox node ip belong to the Lan ip pool or should the server stand alone outside the lan?

there are no stupid questions. Usually the Proxmox node ip has a LAN IP to be reachable from LAN and to let the VMs communicate with the rest of the network. But there are other configurations possible, like having WAN and LAN interfaces on Proxmox…

Looks that the title doesn’t reflect the content anymore. How can I reword it?