Some works I am doing on the cockpit side to integrate the apache features inside the new server-manager, the new things I needed to learn is to make a table from a key type/database, well a lot of fun.

2 posts were split to a new topic: Install wordpress inside a virtualhost

the dashboard is coming, I detect all php scl and mysql version

I have the best to do, make this

to a nice graph

well some fun to come

The “Lamp status” is a nice idea, we can develop further. I understand its purpose is to inform the admin of the available software stack, to install some PHP web application in a vhost home.

If possible I’d group together some elements, instead of giving the bare RPM list. Furtheremore, I’d not limit the list to the “LAMP” concept: also PostgreSQL is citizen here

For instance, the groups could be

All this information can be folded, like you can see in other Cockpit dashboards, because it’s required only during (hopefully) rare occasions, like a new web app software installation.

nice ideas, I wanted yesterday to detect portsgre(official and scl), but I stepped back because of the time to detect all services, but it is probably just a matter of customisations/adaptations, so yes I will go further

I’d change some labels, the most important is the app title: why not keeping the same Nethgui title: “Web server”?

agreed but web server could be also nginx

About the graph: it needs a caption/label/title to understand its meaning. What about “Server workload”? And a caption for each colour.

The works on the graph is not terminated, so definitively yes, captation and title, but due to css, it is hard, I hope I will have more chance soon

I’d change some labels, the most important is the app title: why not keeping the same Nethgui title: “Web server”?

Agree, I would leave the original name that hides the software we’re using. 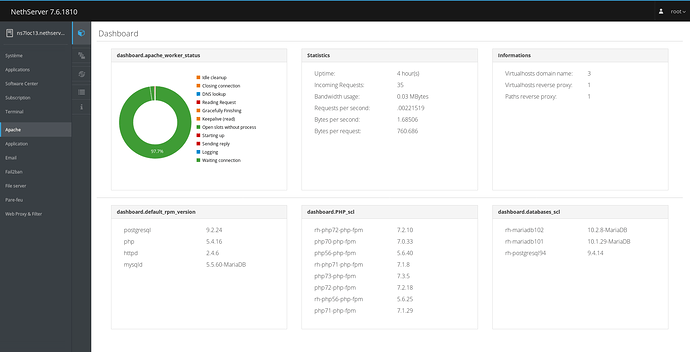 It’s almost time to test it

Thank to @dev_team for their supports

Hi Steph! I’m testing your RPM and I hope other people will join this conversation and test it too!

First of all, great work! Let’s discuss what can be polished now.

Ok! but I want to test it on a real server 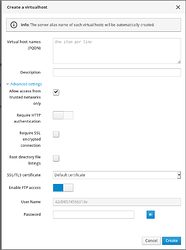 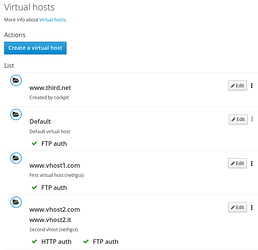 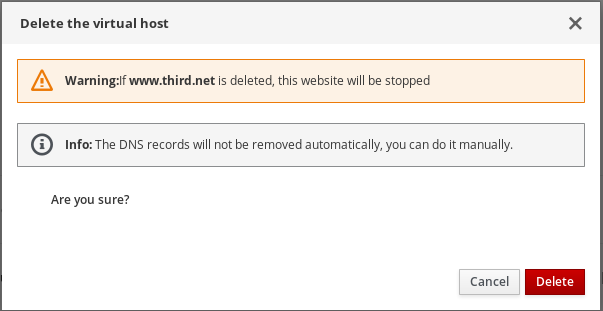 Once an user is created I can see: 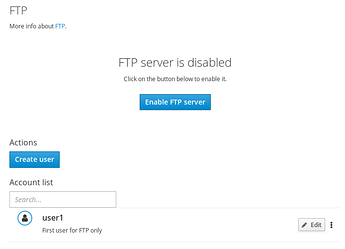 …I don’t like the “FTP server is disabled” empty state. I think we can display the normal layout instead, that one I can see when both FTP server is enabled and at least one user exists: 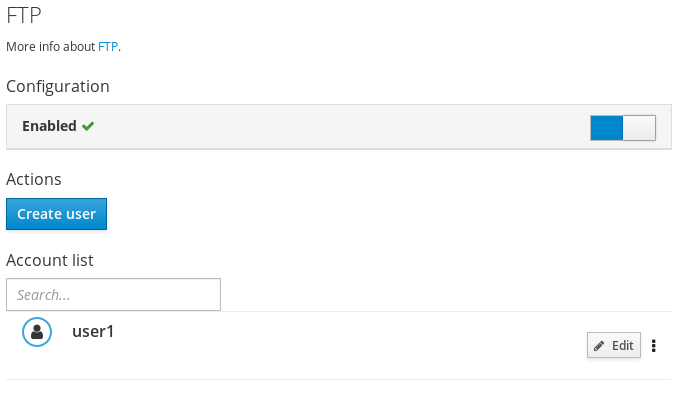 To recap the changes I propose here are 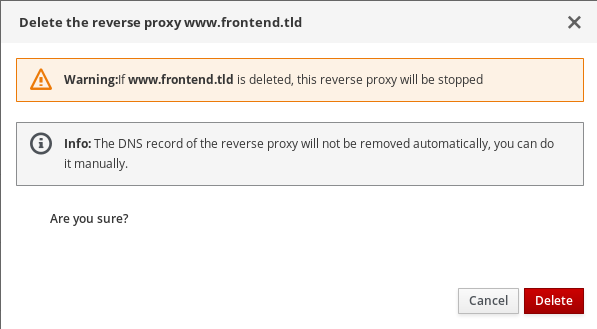 Ok! but I want to test it on a real server

Allow access from trusted networks only enabled by default. Now that it is folded under “Advanced settings” I’d change the default state to unchecked.

I agree on this.

I propose to mark the HTML field mandatory to prevent server validation or to fix the validator message and reflect the actual error condition.

…I don’t like the “FTP server is disabled” empty state. I think we can display the normal layout instead,

We already used the same behavior on other pages.

“Configuration” section always visible: it is necessary to enable/disable the FTP server for Virtual hosts. Remove the “FTP server is disabled” empty state and display the normal layout.

I’ve already evaluated it, IMHO it can be misleading but I’m not sure.

For all other label changes, I have no preferences, so feel free to open a PR.

Well, it is a new way now to use the virtualhost, proxypass, FTP, cockpit is cool

i know i’m late, but i think in Logs the ability to see vsftp.log is missing
great work tnx!

edit: and maybe also xferlog would be helpful to see

Hi @dz00te, something new to play, please could you test ?

thank @dz00te for the verification

Would it be wise to put mysql and other databases in their own tab, as there is mysql/mariadb/corona, PostgreSQL and mssql server on linux just to start…

Just not sure the db items belong on a ‘web server’ tab (although as you mentioned it was a ‘lamp’ tab… as some people run a tomcat java stack and don’t run php, nor lamp. So if it was a lamp tab, that could be useful for that demographic, but not sure why you wouldn’t separate them into areas of functionality, as that’s where an admin would assume to look.

There’s so many stacks now, i wouldn’t think that as a starting point you’d narrow it to lamp.

this is looking really promising though, really nice work.