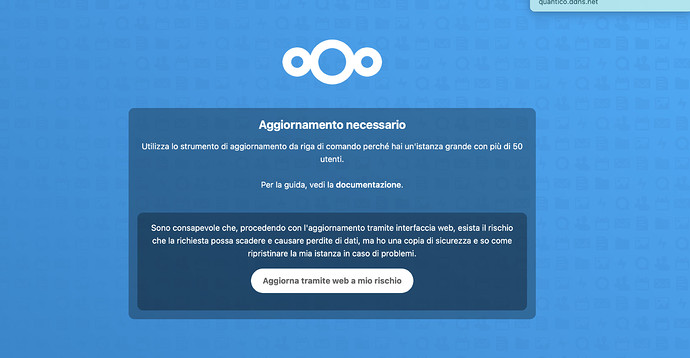 could you kindly provide more information

This time nextcloud asked to update the user database, which is quite unusual because it is performed by the update scripts. I did not proceed manually from the web page but I ran a nexcloud signal event from the shell, to see if this command could solve the problem. That’s how it was! I think from my technical point of view that something prevented the completion of the update.

Sorry for the late response.
The new nextcloud version works with a new database maria db 105, I think this is the reason for asking for database update.
Have a look here:

Nextcloud 21 is here and needs your tests Development

We are working to propose nextcloud 21 for everybody, this is a game changer because we need to use a version of mariadb 105 (From SCL). We have already tested our migration on workable databases and nextcloud instances, we would like to validate it on more servers with a running nextcloud installed before to release it to everybody. We aim stability

That’s how it was! I think from my technical point of view that something prevented the completion of the update.

ok probably the first nethserver-nextcloud-update event (triggered by the rpm) did not upgrade the mysql default to rh-mariadb105, but the second time triggered manually did the job.