My Neth server can’t route traffic over an IPsec VPN connection I’ve established through the GUI to my pfSense box.

My Neth server is hosted in a Contabo VPS. Its “real” interface (with the public IP address assigned by Contabo) is Red, and I’ve created a dummy interface of dummy0 with an IP of 192.168.4.1/24, designating it green.

I have a pfSense router at home, and my home LAN is on 192.168.1.0/24. The router creates a separate subnet for OpenVPN on 192.168.3.0/24. I’ve used the router’s interface to create a connection profile for Neth at 192.168.3.100/24, dropped that .ovpn file into /etc/openvpn/client/pfsense.conf, and enabled the connection with systemctl enable --now openvpn-client@pfsense. (Doing this through the GUI would have been much trickier; last I checked the GUI didn’t support uploading the standard .ovpn config file, but instead required some .json thing that only another Neth server would generate.) That connection has been working well for as long as I’ve been running the Neth server there.

Then came IPsec. Compared to OpenVPN, IPsec is a pain to configure. There are about a dozen settings, they all need to match between local and remote (including, critically, the local and remote identifiers, which Neth defaults to completely inappropriate values), there’s no documentation on the Neth end about what settings are expected or supported, and the (much more thorough) pfSense docs recommend settings that Neth doesn’t support at all. But that rant aside, with a bit of experimentation, I got a connection set up.

From the Neth end, I can’t reach anything on my LAN–I can’t so much as ping 192.168.1.1, the IP of my pfSense router. Nor can I ping anything else on my LAN, nor can I connect to them in any other way (like using iperf). 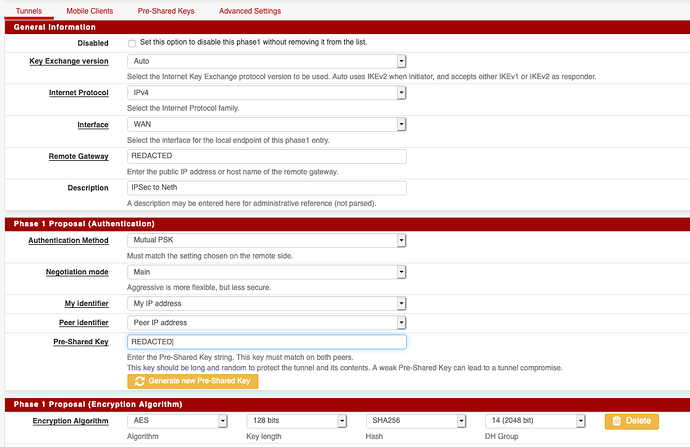 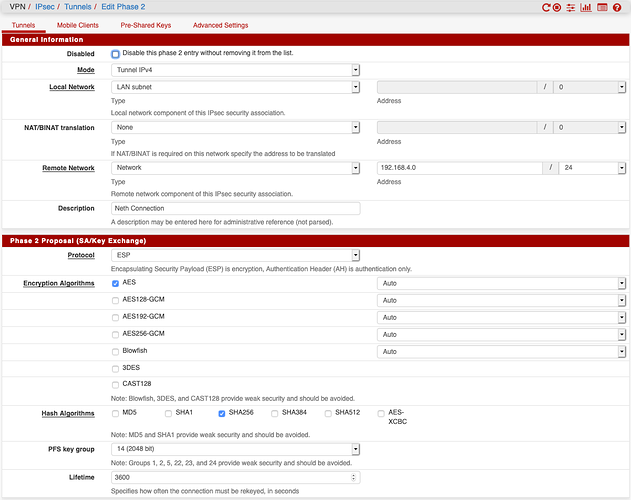 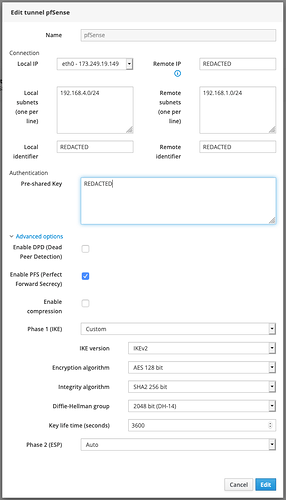 From the fact that my LAN can connect to the Neth box, but my Neth box can’t connect to hosts on my LAN, I surmise that there’s a routing problem–my router (and therefore my LAN) knows to route traffic to 192.168.4.0/24 through the IPsec link, but the Neth box doesn’t know to route traffic to 192.168.1.0/24 through that same link. But having determined that, I’m not at all sure how to fix it. Help?

Strange, that my quick and dirty Test-NethServer has no routing problems to the other side of the IPsec network. Performance from both sides over VPN seems quite good.

My Test-NethServer is a VM in Proxmox, the LAN (Green) of this NethServer is on vmbr2, an internal bridge (Virtual Switch) in Proxmox not (yet) connected to anything. The Nethserver has no issues pinging the other side of the VPN and can actually connect to almost anything there (NAS, Printer, PCs etc). I even tested a NFS connection, after adding the internal IP of my NethServer to the share in question on that NAS - it can mount the drive - no issues!

So the routing “Out of the box” through a VPN seems to work.

@danb35 feel free to correct anything wrong with my “small version”.

Last but not least: AFAIK Nethserver act as IpSec initiator, cannot be configured as responder…

I fired up my Test-NethServer again, just to take a peek at it’s routing:

If the automatic routing in NethServer does not work, you may need to check if your OpenVPN config is interfereing… Both point to the same IP Network as Target.
You may try a manual routing entry, using the conventional linux commands…

I can second Pike’s comment to “Automatic”, it’s never what you really want!
I set all attributes on both sides by hand, and get a more secure yet fast network!

In your case, with static IP on both sides of the VPN, it doesn’t matter about initiator, as long as the nethserver starts that (My Test-Nethserver is also the initiator), it’ll work.
On the Home end, the PFsense sees itself as router, and your LAN hosts regard that PFsense as default gateway, implying “That guy knows where to forward my packets…”. 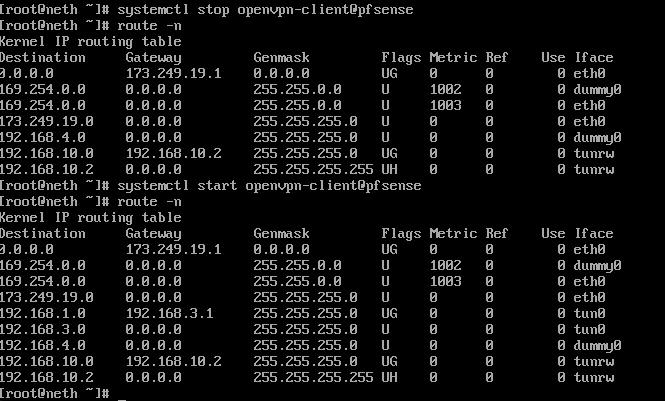 I am a routing sub noob, but AFAIK currently NethServer can not manage two paths for the same subnet.
IMVHO you should…

then… make a decision based on routing status

These are the tests that i’ll do…

As Pike suggested, remove the OpenVPN, maybe even remove both VPNs (IPsec too).
I’d at least make a config-save on the NethServer beforehand.
Then recreate the IPsec connection, but manually specify all Specs.
I think it will “just work” after that.

As Pike suggested, remove the OpenVPN, maybe even remove both VPNs (IPsec too).

OK, I deleted the IPsec VPN, and did systemctl disable openvpn-client@pfsense (remember, the OpenVPN configuration was all at the CLI because the GUI is brain-dead in that regard). Then rebooted.

On reboot, of course, neither connection exists. I then reconfigured the IPsec connection, manually specifying the Phase 1 and 2 parameters to match what I’d configured on pfSense (and the defaults there are just awful). It connects just fine, but still has no idea how to route to 192.168.1.0/24:

In your routing table above,

points to the right Interface, but no “next hop” is given.
A “next hop” is the next router responsible for further routing the traffic, needed if the other side isn’t in the same network. Here, as in my home Test-NethServer, this corresponds to the default gateway.

Note:
This is not persistant after reboot.
To make it persistant:
nano /etc/sysconfig/network

or use the static route in the Web-GUI…

The .10 network is for the Neth box to act as an OpenVPN server, though I’ve mostly abandoned that.

This needs to be removed first:

And the VPN should be up when putting in the route…

I’m pretty sure it’s the VPN that’s putting that route in the table. Here’s the output of route -n after deleting the route you gave, and disabling the IPsec connection:

…and here it is after re-enabling the IPsec connection:

The gateway is still missing in the line

I know. But that’s the route Neth adds.

Somehow, maybe due to the “dummy” interface, NethServer is not adding in the needed gateway to this route…

Do you have a link how you did the dummy interface?
I could try that on my Test-NethServer.
I’m taking the easy route at the moment, a Proxmox VM isn’t the same as a hosted server, and my adding a virtual, but still “real” NIC is easier…