Coronavirus, How are our Italians?

Coronavirus, How are our Italians doing? In America we hear the worst in Italy. Just wondering how everyone here is doing.

As of today, nethesis is doing fine, but we feel surrounded by the corona virus, every day we discover that at least one more person we know is sick (and many hospitalized). Never tried, but I think that you may need a single line in `/etc/shorewall/rules: DNAT loc loc:x.y.z.w:53 udp 53 where x.y.z.w is the IP of the pihole.

Media sometimes tell tales like drama… a bit too much.
Obviously the situation is serious, first because the virus is a serious thing as it was into China, secondly because contaminate other people is such “easy” as was written before.
https://who.maps.arcgis.com/apps/opsdashboard/index.html#/c88e37cfc43b4ed3baf977d77e4a0667
The most “unsure” thing is people into hospital, because there are a lot of infected people to take care, so the “self containment measure” was taken to slow the propagation of the virus and let the ill people heal. Doctors, nurses and paramedics are working hard, and unfortunately several of them were infected during the first stages of outbreak; this lead to self containment of them and their family, hoping that the illness run could lead into “light” consequences (like flu) instead to the hard one.
Currently this is the most important asset to take care, IMO, because without hospital, doctors, nurses and meds the situation could become fully drama.

Most of people are scared, but healthy. I mean, except idiots that were ignoring hints, guidelines, and considering the contagion “distant” and “not related to them”. In this way of behaviour I read UK government, i hope that the messy blonde guy into Downing Street will receive a head slap and take to make more sense of that.
I’m in a small town, sometimes people here take a lone walk, or go outside to shop groceries and other stuff.
A lot of people is still working. Some foreing-goods-dependand factories are closed (even famous ones), leading the lean thinking to keep things shut down during raw material shortage. Other small companies are still producing goods for honoring contracts or shipments. At least, it will help to keep people sane and occupied in doing something “reassurant”.
Lots of shops are closed, once considered the most running because of their size; now small shops can achieve a bit better the low density requested keeping inside one or two persons by time.
People are not used to keep themself at home, sometimes getting hardtime to manage kids without school, without letting them go to out of school activities or even considering that one or two parents are still working (most of nurses are female…)

Last thing: most of people is healthy. And a lots of them are uncomfortable, or scared. I think it’s natural and common sense.
My plea is for hospital people. Patients will heal, patients won’t, but without al the medical staff things are gonna mess a lot.

Thank for your testimonial, It is not more an Italian nor a china issue, it is a global issue now. The french governement asked yesterday to stay at home for at least 15 days and probably more, working will be hard, school are closed, children of course are at home.

French people seems to not understand really the situation, I think from my point of view it is really dangerous. However the chance we have in Europe is that the health is our first right and someone can be treated without paying first.

I do not know for UK, I think they took recently weird decisions, my father and father-in-law are doctor and do not understand this decision to hide the problem

Speaking for someone in the UK, there are a lot of people who don’t understand the government’s response. Its almost like they have taken the route of taking a very long term view on it and letting it spread to a certain extent so that the population will build up a herd immunity to it in the hope that it will protect the population should the same or similar strain make its rounds again.

The NHS (National Health Service) pretty much is unable to cope with this at all and although they have been given a “blank cheque” to pretty much do what they need for the crises, its really too little too late and some of the decisions taken and announcements made are just plain stupid and ineffective and in some situations poorly implemented.

But there is some unspoken or little spoken agreement in that, whatever decision the government makes/takes, both the government and the people are pretty much screwed.

A lot of companies have told their staff to work from home where possible.

The panic buying is really not helping things at all and is making things truely difficult for some as they cannot find the essentials because of it.

Unfortunately we’re pretty much in a waiting game to see what happens.

As of tomorrow, public transport will be reduced by 50% for transport lines, tourist lines are shut down.

All shops besides food / health are closed.
Hospitals / Doctors are doing overtime, indeed have been “requested” by the government to work.
All surrounding countries with the exception of Liechtenstein have closed their borders. Liechtenstein is that integrated to Switzerland, that it’s almost another Canton/State/Bundesland/whatever. Post, Water, Power are all integrated.

Working from home, due to the lockdown. Only “important” work to be done outside…

Shops feel like the empty shops in DDR (GDR German democratic republic, the east communist part) - at least for stuff like toilet paper, canned food, disinfectant, etc. A lot of other stuff are plentiful. Face masks are long sold out, the one’s in hospitals have been stolen by hoarders…
At least all the panic hoarders have at least 5 years supply of toilet paper at home… Must be a really sh*tty situation they’re in… Seems worldwide the first item sold out is toilet paper…

Wish everyone the best weather (stuck at home…), health and the wherewithall it takes to get through these tough times!

On a slightly related note, now that many people are sitting at
home… why not use your available compute power to help out
science to battle against corona? How this all works, I can’t tell
you for fear I might be telling it wrong, but the website below
should clear up stuff, and with some light tinkering, it does work
on nethserver too… From rusted grandpa pc’s to multi socket
servers, every ounce of power helps.

AFAIK, there’s not a project like Folding@home or SETI@home for Covid-19.
Genome has been mapped, ad least for the first mutation, and now the research is headed to find a cure protocol. Using current molecules or creating new ones, so i don’t think that pharma corporations are lending computer power outside the one they have or lease.
During this outbreak most important thing, beside find a way to mange the illness, is having the lowest risk and the highest PR return. A corporation assured to produce and sell for free the drug which can (currently) help processing the illness status, reducing lung stress and helping the critical status into ICU.

For the cure, this could be a completely different scenario: the brand that will bring an effective cure to Covid-19 will exploit as far as possible the media return for “being the answer”. This will help any future negotiation with nations health management about prices, rating and even allow a smoother process for any kind of treatment proposed.

These are only my ideas/ personal points of view.

i don’t trust MSM !
i believe in nethserver !

It may not be the most waterproof of proof, but here’s a
screenshot (hopefully) of my nethserver folding webcontrol. 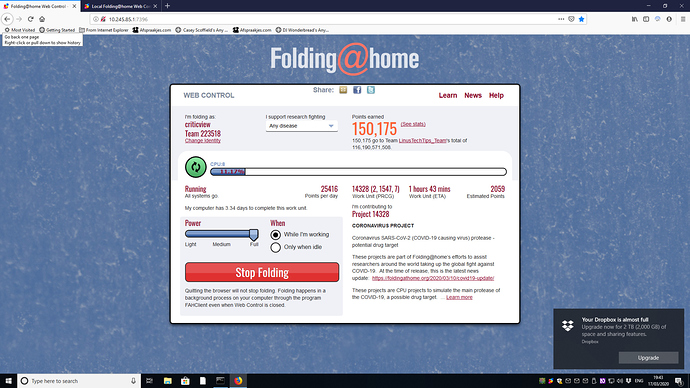 And in case, the previous message failed, i’ll add the screenshot
as an attatchment this time.

I have been in quarantine for a week now (in NL), one more week to go. Severe pneumonia and virus infection. But I will live.

My best wishes for recovery for you and all other people who are affected by this diabolical disease.

This morning at outdoor market, in my little town in south-west France (Villefranche de Lauragais), everybody was really concern.
A lot of peoples were wearing mask. Move away one meter from each others at stands and nobody try to hurry or cheat the queue as usual. Quiet and peaceful.
There were only 50% of merchants and a third of consumers. Same things in supermarkets.
I do not ear that anybody was ill around here in our countryside.

In my town, since today a 2nd case of corona was identified… it is getting closer…
stay indoors as much as possible… I allow myself just a walk on the beach each day… walls seem to creep up a bit…

Don’t forget the fear mantra of Bene Gesserit from Dune. It always helps to focus.

I am from Toronto, Canada.

We have all been told to stay home and only go out for necessities. Most seem to be heeding the warning. I work for an IT company who is an essential service, so we are all working from home. Canadian infections are on the rise, Federal Gov’t is looking to invoke emergency measures.

Our Gov’t initiated the border closure with the US( except for goods transport ), as the US is having no success slowing the spread. As recent as March 20th, they were still going to the beach in Florida.

Please stay healthy and/or speedy recovery, wish everyone the best.

I am from Montreal,

Trou d’eau: too little, too late; what a clown! As father, as son…