VLAN on Nethserver with Zyxel switch and Unifi AP Lite

I’ve always had to download/install a Unifi Controller to set VLAN setups on my AP’s but you might be able to configure them locally. If you have the time, you can spin up a Debian/Ubuntu virtual machine and then install the unifi controller on that for your initial setup.

I’ve not used Zyxel switches before but my google foo found this:

How to configure VLAN on Zyxel Switch

This tutorial will give you a glimpse of how to set up tagged and untagged VLAN on Zyxel switches.   Step by step guide These steps will show you how to set up a VLAN that separates your WiFi traff...

Hello, i can’t help for with the zyxel switch, but if u just wanna pass multiple vlan’s ( maybe tie it to different SSID ) to your Unifi AP, just make sure the LAN port where your AP is connected it’s set as trunk (so alla vlan get passed) and for each SSID use the vlan configured on the NethServer 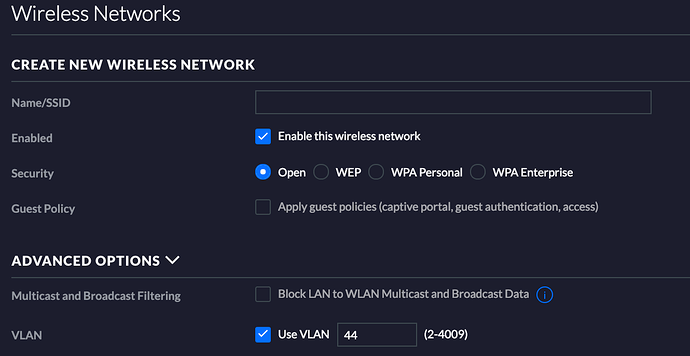 Thanks everyone for helping me out. I am able to work it out. for guys like me if someone is stuck, here is my solution which I implemented.
I was using ESXi and Nethserver was a VM.
So, Adding logical interfaces on Nethserver using VLAN doesnt work it out because even you tagged this interface with Vlan ID when it sends the traffic it uses ESXi port group and there its VLAN 0 default.
what I’ve done is…
I added logical interface on ESXi having the same switch as lan is assigned (by adding VLAN ID). and on Nethserver VM I added another network card by assigning the port group which I created on ESXi. then, On Nethserver I have configured the Interface (Guest-Blue) with assigning desired IP address. and that on switch vlan trunk mode and tagged as it says in many manuals and tutorials. it worked out.

Again Thanks for your help!