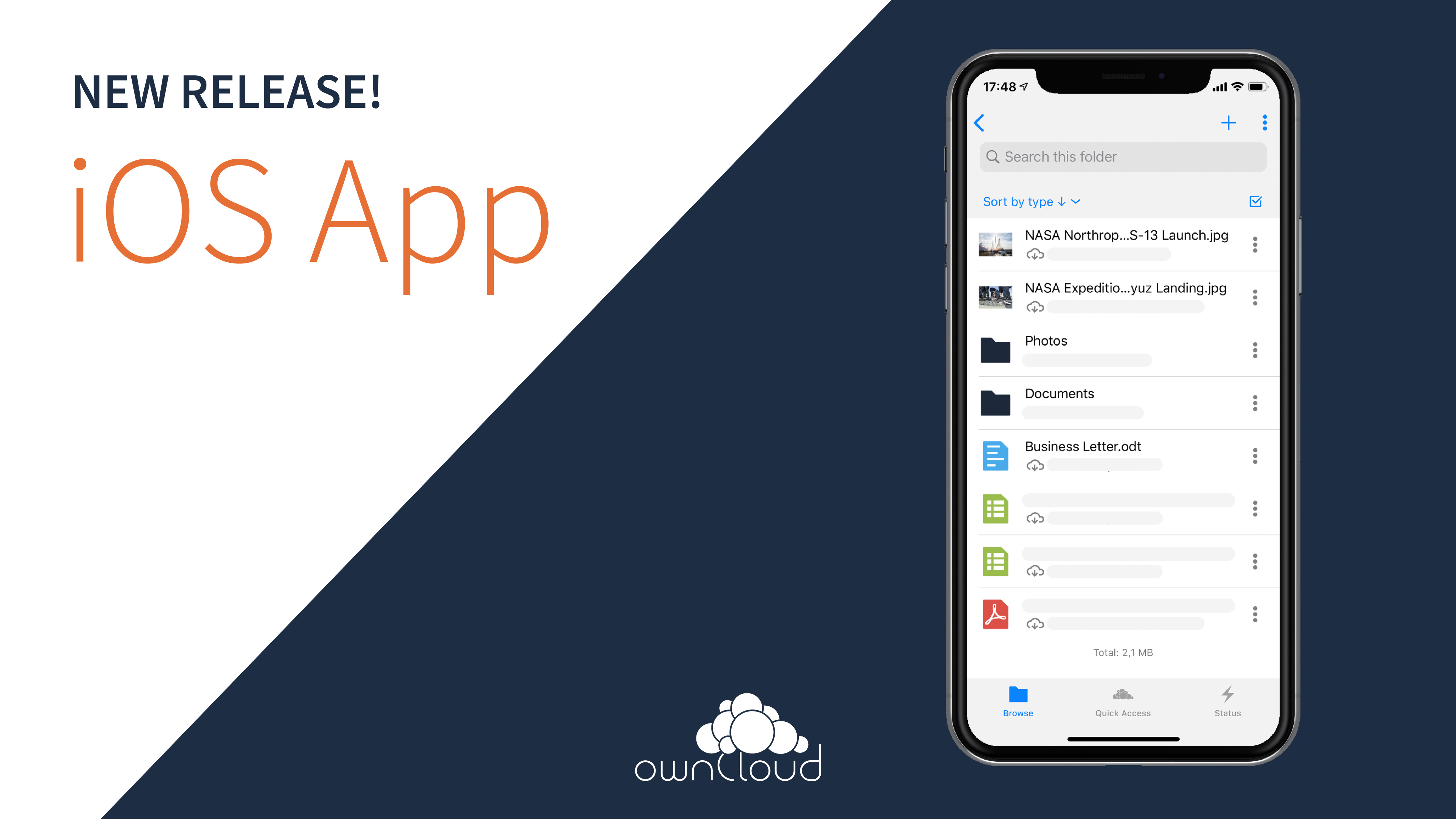 Have you already updated your ownCloud iOS App?

With our new iOS App version 1.3.0 we added some really cool features: Document scanner, markup on images and PDF files, shortcut integration, markdown to PDF, clipboard manager and many more!

I don’t know if anybody is part of NextCloud Community, but it would be nice to have a simple, directly linkable, and both user (first part) and tech (second part) oriented feature list for

I’ve posted this in chat… I’m merely pointing out the OC iOS APP, which can be used with our NS NC.

I’m pointing it out because this is a pretty feature rich APP which is an alternative to the imho cludgy nc APP.

I quite agree that the feature list looks quite impressive.

I’ve used OwnCloud for several years, and switched to NextCloud when it became available (Same with MariaDB, LibreOffice et al…).

I like running cloud services for my 20-30 clients all using NethServer.

But there are still a few issues, the main ones are still there from day one:

I’ve read their reasons several years ago, but still the question remains: why use such a lame protocoll, when rsync is available, stable and is defacto standard in one way sync. There is a code for two way sync, based on rsync (I think it was called unisync), but that project more or less closed down, with almost no activity (No win7 client or newer…).

Say a simple daily backup copy of a SQL Dump (size 1TB…) in the Nextcloud or Owncloud. Both will start to choke as the file takes up almost all available bandwith - just to sync one file off site!
Rsync will take longer the first time, but each time after that it’s synched in seconds or minutes!

I mean, file sharing is their MAJOR use case, and even with that, the top and bottom end aren’t really satisfactory. (small and very large files).

Calender and Adressbook work very well since a few years now. So does the Collabra platform with Office…

End to end encryption (Nextcloud has it, not Owncloud!) AND DeltaSync - these are the two mission critical make or break issues for an open source cloud. I think Nextcloud is on the right direction, but give us delta sync!

Both Clients have issues with several Clouds, they can only use one…

I’ve posted this in chat… I’m merely pointing out the OC iOS APP , which can be used with our NS NC

Is OC iOs client supported by NextCloud community? If the answer is no… why use it?

Have you seen how little support there is for the NC iOS app on the NC community?

They either work or they don’t, I’ve seen numerous issues with the NC app that linger and linger.

Both Clients have issues with several Clouds, they can only use one…

I have no issues with multiple accts for multiple servers in one instance of an app.

On the other hand, dark mode makes acct selection a nightmare.

So the answer for “NextCloud do not support enough iOS client” is… “use OwnCloud iOS client”?
Why?

Ok, then they improved that (multi servers)…

Small & very large files are still poorly handled by both.

Missing delta is still an issue, as I do use some large files which are often edited, these tend to eat a lot of limited mobile bandwidth. Personally, i’ve removed iOS client from my iPhone for that reason. I don’t use it on my Macbook for the same reason, when i’m on the road, i often need to use my mobile as a hotspot.That has a limited data plan, hence limiting Nextclouds usefulness for file sync.

I do use the calender and adressbook on almost all devices, there sync works VERY WELL!

So the answer for “NextCloud do not support enough iOS client” is… “use OwnCloud iOS client”?
Why?

All I’m saying here is that the OC and NC clients are interchangeable, in fact they’re not the only clients that can be used. I’m pointing out that the new OC client has a lot of neat features. I’ll also point out I have both clients on iOS devices and in the past, on several occasions, when the NC client has borked, the OC client has always worked.

End to end encryption (Nextcloud has it,

Nextcloud has it on paper. In practice, well…

Is OC iOs client supported by NextCloud community? If the answer is no… why use it?

I’m a longtime user of Mac / iOS on OwnCloud / Nextcloud.
OK, I’m also a longtime Linux and Windows user too, but this isn’t an issue here.

In the PC / Mac / Desktop world, I just wouldn’t settle for a single Task app, and even that single task is done badly.

Let’s face it, the NextCloud (And also Owncloud iOS Client to some extent) iOS client can ONLY sync files and retrieve files. Ok, adressbook & calender can be synched out of the box, using built in universal clients for CalDAV/CardDAV…

Even worse is the situation on Android, in my opinion. Android doesn’t allow the user to use the built in CalDAV / CardDAV implementations (They’re used for Google Adressbook & Calender) so you need another App(s) to do that job, which, again in my opinion, the client should do.

It’s like I need to get a separate FTP programm, but since that FTP Program can’t do sFTP, I’d need another one for sFTP and yet another one to do SCP. Come on, this is just handling files, one of the oldest tasks in computing!

In real life I’d use for example WinSCP (on Windows), which can easily handle all three tasks and even more. 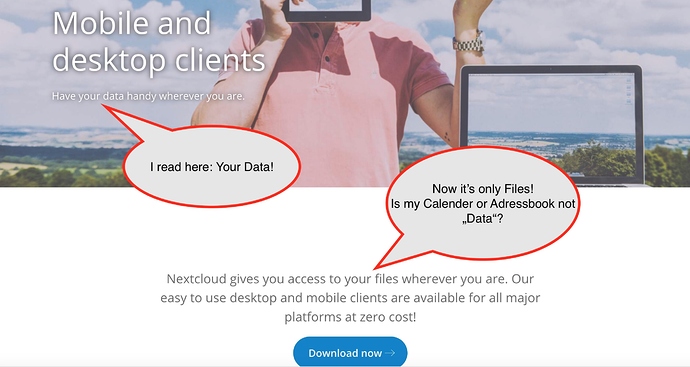 Both clients are basically “one trick ponys”, and both badly done!

Both still valid, even after so many years!

The only “good” feature is that files only get downloaded “on Demand”, but once demanded, they’re always copied in full after modification…

It’s a bit like the small print in iTunes / (now Finder) about Backups of your iOS device:

I prefer the second version. ALL is all inclusive, “most important” is someone elses view of what is important to me.

No end to end encryption (yet).

Are you sure about this? I know that the iOS app used to support it (to the extent E2EE works at all, which is minimally).

It’s still in “Teststadium” as of today, on their web site… 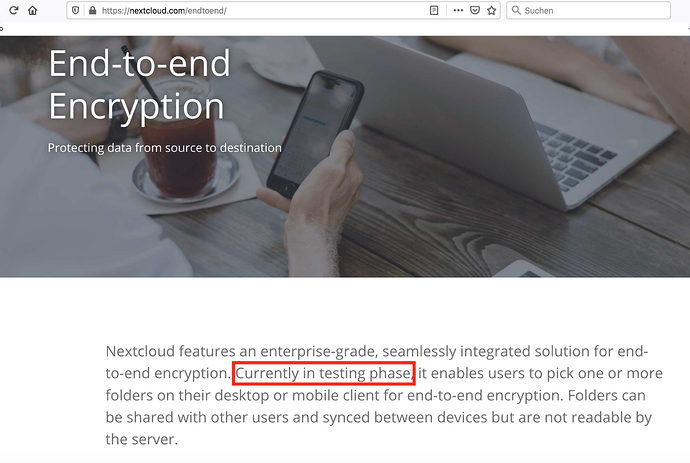 It’s still in “Teststadium” as of today, on their web site… 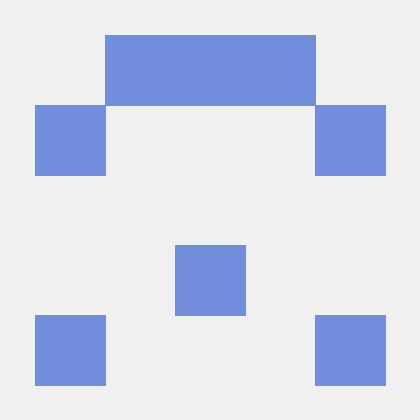 Issue: Why is this still Alpha code?

First of all, thanks for danb35 to rise the question again.
But… maybe i am dumb asking: don’t TLS 1.3 mean E2EE?

I love providing my clients with a cloud they command and operate, on their premises or wherever. Nextcloud is my solution for that for several years now…

But there are still issues, some more, some less severe.

The desktop client is fairly ok. One issue is that a network drive isn’t supported for local storage - which could make sense.
However, a lot of enterprise clients do not provide for local storage on the desktop, these are minimalized or only thin clients, but the user has a Home drive for such usage…
Only, both NextCloud and Owncloud do not allow this usage… Local Storage has to be local. How, for a thin client with only a boot rom and RDP?

I’d prefer not having to resort to commercial solutions for file synching (goodsync as example). It works very well, syncs delta and fast. Large or tons of small files are handled well.

For certain businesses (Health, Financial, Judiciary) in Switzerland, the law is a bit stricter and tolerance by users less - as they’re used to “working” solutions. So I need something which can handle the task and do that reliably and consistantly!

Owncloud / Nextcloud: I do not like the idea of a “castrated” open source version, with all the goodies as closed source available only as a commercial “Enterprise Server”, with enterprise style pricing… NextCloud has no such closed functions, Owncloud is all about the enterprise version…

“enterprise style pricing” costs zero, actually several (3-7 or more) of those, with something in front…

Specifically, E2EE encrypts the data at rest. TLS (in any version) only encrypts it in transit.