Finally, we have a subscription… and the notice of new updates has arrived too, I can’t wait to make the upgrade.

In previous years, always and before a version upgrade; I have a daily 3AM backup. I always try to do this while being present in the office.

But of course, I’m working remotely now, and I’m actually nervous, and I have a few questions:

I’d like at some point, to show my colleagues how this activity is done. They are in the office. And the truth is, I’m not getting any younger by the day.

Then the wiki says:

mrmarkuz repository
Maintainer mrmarkuz …
Description
This repo is for testing packages with external repositories. For now the repo is for NethServer 7 only. *Be careful when using in production environments as these packages are not fully tested!

As you can see, being my first time with support tickets… I have many questions, besides my time zone is in the Pacific… and I think that in those hours in Europe many of you will be sleeping.

It is possible to change the password on my.nethserver.com?; I have already searched without success.

This can be done before you login (logout if you are) and click the Don’t remember your password? selections.

As for the upgrade process I did mine from 7.7 to 7.8 via the Cockpit UI that had a specific highlighted area for me to give permission for the upgrade. In all it took about 20 minutes from start to stop with a reboot after. Before I began the process I created a snapshot within XCP-NG of the VM (Proxmox has something similar though andy might have a better idea) in case something went wrong and began the process. 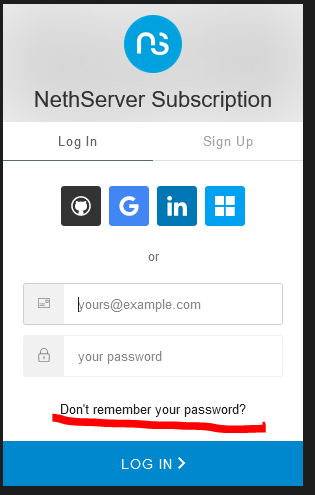 Mental note #1, when in doubt always delete the cache & cookies.

In previous days Firefox didn’t work for me on that site… now it does. Before only Chrome and Vivaldi could get in, both with the same “effect”.

The Proxmox magic. I had completely forgotten the snapshots in Proxmox. (what a shame)

I’m waiting for the mail… almost 10 minutes ago.

I wonder if I don’t have the IP address blocked from where the mail is coming from.

This repo is for testing packages with external repositories. For now the repo is for NethServer 7 only. *Be careful when using in production environments as these packages are not fully tested!

This was true when I created the repo. In the meanwhile the packages are tested/used by the community.
Thanks for pointing out, I updated the wiki entry.

Need to research more.
I was expecting a simple installation, reading the 2018 “How To” it seems that I need to create and configure database & PHP.
I’d better wait until I get the version upgrade done.
And I will try to configure a nethserver to practice this zabbix installation.
Regards

For zabbix you don’t need the howto anymore, just install as described in the wiki or test the new zabbix 5 here.

And thanks for reminding me of the snapshots, they saved my day during the update.

Marked as solved, but not completely, points solved and pending.

Regards and thank you all.

Zabbix installed, but I still need to learn how to use it and create a diagram of my network.

Funny you should mention that (learning how to use Zabbix)… I recently reached out to @Andy_Wismer with a very similar idea and he has been kind enough to work with me getting me started down the right path though I’m probably a slower student than I realized. For me this highlights an emerging problem with NethServer - the package has TONS of great add software module but some are highly complicated to first dabble your feet in hence often leaving many of those software modules to be unused. I don’t know how or when but community lead software labs (something akin to real life HowTo’s/active homework problems) would introduce many of our un-trained users to these software products and in my opinion have greater adoption over all.

Royce, you’re right in that sense that a lot of the available software is “out of depths” of your average Joe dabbling with a Home-LAN / Server.

One of the tasks I’ve set for myself is to put together most of the stuff needed that a User can get started. Like for Zabbix. Some included modules a good. There’s plenty more on “Zabbix Share”, their Template Marketplace, but a lot are either badly documentated, come in a freakish language and NO english docs available.

A Zabbix Database can grow substantially, so maintenence is needed, more than what “Zabbix Household Cleaning” can keep up with… So we need a simple script, usable even for beginners, run by a Crontab job to do this.

Another (simple) task is a set of decent icons, which anyone can use. This part is done, and I keep updating the library with new icons everytime I run in to a new device…

Documentation for the typical “use cases”, not only just installing, but planning and rollout…

These are some of the issues we’re facing…

But we’re slowly getting there.

Home users often have no concept of monitoring, how powerful that can be, and how to go about the whole thing.

As the saying goes: Rome wasn’t built in a day! To be honest, they’re still building it. Rome, like any major city in this world, has building sites all over the place. The alternative could be seen as Pompeii, since 2000 years, when the Vesuv erupted, they’ve only built a cashier/kiosk, to milk the tourists. But Pompeii is a “dead” town, for the last 2000 years!

Maybe a wiki with recipes to get you started can be helpful.

I’ll try to watch some videos before asking questions.
Regards.

There are manuals by @michelandre and I think there’s already a lot of information about Zabbix shared by @Andy_Wismer in the forum.

Is there a way to reset the password for zabbix?
Can I simply delete the application from the cockpit and reinstall it later?

I had the key stored in the vivaldi browser, but today it was updated, and when I start the browser it simply closes, and I didn’t write down the password.

You can use the Nethserver Module PHPpgadmin to read / write the database of Zabbix.
There’s a table users (AFAIK) there. The password is encrypted. You CAN replace it with a known password, also encrypted, like the default password for User Admin: “zabbix”. You can install a NethServer in VM, add in the Zabbix module and phppgadmin, and read out the password…

The procedure above works for most databased applications…

I haven’t really done anything with my zabbix installed.
And the tip you provide is really useful in case of a big emergency.

But at this moment I really don’t have much time (as always other emergencies), I will have to pass this tip on and ask:
Can I delete the zabbix application and then reinstall it?

Make sure the PGSQL Zabbix Database is erased…

… Any clues to verify that?

phppgadmin provides a gui, which can “Drop” databases…

The files are here:

At the end he only left a “zabbiximages” folder, and it took him a long time to uninstall it, it had me at the edge of the chair.

Thank you @Andy_Wismer; I’ll setup another NS vm for practice.