I tried to change the FQDN with the procedure in the manual (local AD):
http://docs.nethserver.org/projects/nethserver-devel/en/latest/nethserver-sssd.html#change-the-fqdn
But this doesn’t work. Tried it on an upgraded machine and on an fresh installed one.
To leave the realm and clear it, works. After that it’s possible to chance the FQDN, but you can’t join the realm again, because there is no more realm to join.
With realm join -U administrator $(hostname -d) you get realm: No such realm found
I think there is something missing in this procedure.

So I tried to manually set the db values for realm, workgroup and provider and did
expand-template /etc/samba/smb.conf
systemctl restart smb
systemctl restart realmd
and was joind to the new realm.
So far so good, but I still have no connection to the ldap server and got stuck.
signal-event nethserver-sssd-save and a reboot do not help also.
Can someone give me a hint which is the right order of commands to do this?

o.k. I spent some time with that and now I found a procedure that worked for me

Now I have a new FQDN and all my users and groups are back.

@dev_team Can someone confirm this procedure to work in other cases?
So http://docs.nethserver.org/projects/nethserver-devel/en/latest/nethserver-sssd.html#change-the-fqdn could be updated.

There’s something wrong under “Leave and Re-Join Active Directory” section. I should fix it, thank you @flatspin

That procedure should allow changing the host name (SystemName) only. The domain must be the same.

BTW your procedure should work because AD is completely removed and reinstalled with a new domain. It’s a different use case.

All in all, it might be easier to reinstall completely to change the FQDN because this change is really huge and currently error prone.

Just tried again on another server which had the AD Domain incorrectly set.

For what it’s worth:

I just did the following on fully updated servers:

During this I changed the FQDN on 1 server, 3 times in a row with rebinding and unbinding in between, and even completely recreated the domain. This went all with just one error which did not repeat when the same action was tried again (bind the fileserver to the domain).

I did not try to restore the users or the groups, as I had none that mattered. I recreated the same users, and all the configuration on the other servers started working again.
This included SOGo mailboxes still working, still containing the test mail, etc.
This also includes the home-shares.

During testing of having the same FQDN as the domain you are trying to create, I first changed the FQDN from server1 to server1.ad.mydomain.com and recreated that domain succesfully, and then reverted back to server1.mydomain.com to create domain mydomain.com

So the FQDN of the Nethserver running the samba container, was changed as well.

There is very little custom config in there, so the process outlined two posts back seems to have improved.

Now I have a new FQDN and all my users and groups are back.

password of users are the same, data are still there ?

To be able to give you an answer, I repeated the procedure.

Mixed result on the first look: 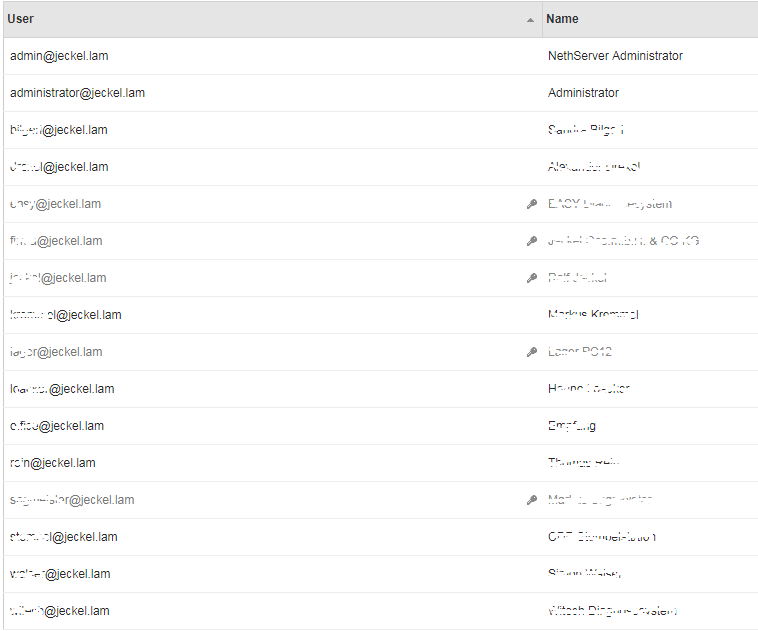 image.png758×631 18.6 KB
Some users seem to have a password, some are shown as locked. Befroe all user had a pasword and non were locked!

So all passwords has to be changed manually.
In my case not that big problem with 15 users. In a bigger company it would be a big problem.

Note: In this test I changed also the domain. I’ll test with only changing the FQDN and will report later.

Did the procedure again with only changing FQDN.
Same result as before, but this time some other users are locked.
Tried to login with old password and standardpassword, but non worked.

So all-in-all in a realistic scenario it’s not really possible to change the FQDN, because all passwords are gone or messed in some way.