PPPoE on TekSavvy (with optional /30 subnet)

TekSavvy is a Canadian ISP that provides both static IP addresses as well as /30 (or /29) subnets. The problem is that most DSL routers can handle the first but not the second (without a lot of digging/hard work). Nethserver provides a clean standard way to handle both.

This how-to addresses each service element in order. First setup the PPPoE and make sure that works, then setup the subnet.

In order to setup PPPoE on Nethserver, you require:

In this how-to, the following networks are being setup:

Make sure that the Nethserver gateway has one ethernet interface plugged into the router and the other into your internal network. In this example, ens32 is internal and ens192 is external. On Nethserver 6.7, you will see eth0, eth1 naming conventions.

The manner in which you must do so is hardware dependant (and therefore beyond the scope of this how-to). If you are not able to get your router into bridge mode, at the very least, stop it signing on to the network using PPPoE.

What is most important here is that the router no longer signs onto the network using the username/password provided by your ISP. Nethserver will take over that job.

Screenshot 1 shows a sample configuration (note that the gateway entry is left blank). Make sure that it is in the GREEN zone 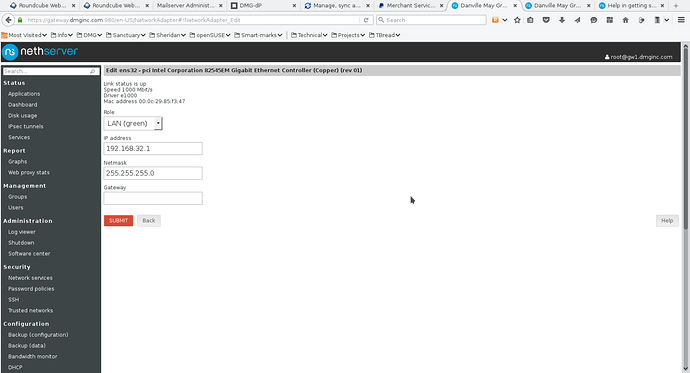 When you click SUBMIT, you should be able to ping any other internal systems.

Screenshot 2 shows answers when you add a new interface. Select RED zone and PPPoE, then click NEXT. 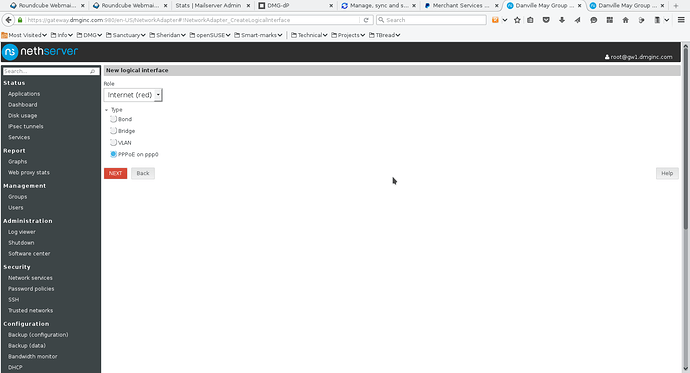 Screenshot 3 shows a sample ppp0 configuration. The key considerations are that you MUST use an unallocated ethernet interface. Normally the pull-down on the Ethernet interface will show you just which one(s) is available. 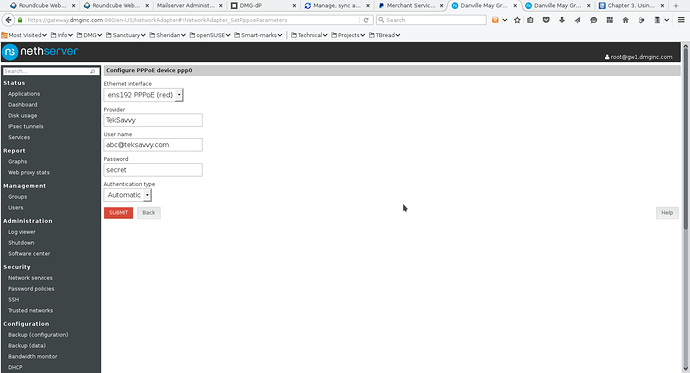 Next fill in a descriptive name, your username and password. You will notice that the password is plainly visible. It is not masked. In TekSavvy’s case, the default of authenticaton type worked just fine.

Once you click SUBMIT, you should find that now it is all working. By default the ethernet interface as well as the ppp0 interface is placed in the RED zone.

My sanity check is to use a terminal session and check it using ifconfig plus netstat outputs. I also ping various internal and external systems.

When using Nethserver in this manner, the server acts as a gateway for the subnet. This means that the /30 subnet gives two IP addresses (according to networking rules that the first is the network ID and the last is the broadcast).

In this example, there are four numbers:

Screenshot 4 shows the configuration for the third ethernet interface. What works best for me is using the ORANGE (DMZ) zone. 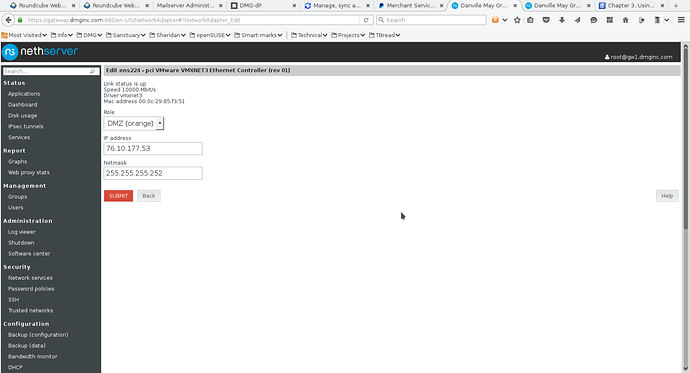 Screenshot 5 shows the final configuration of the network interfaces. 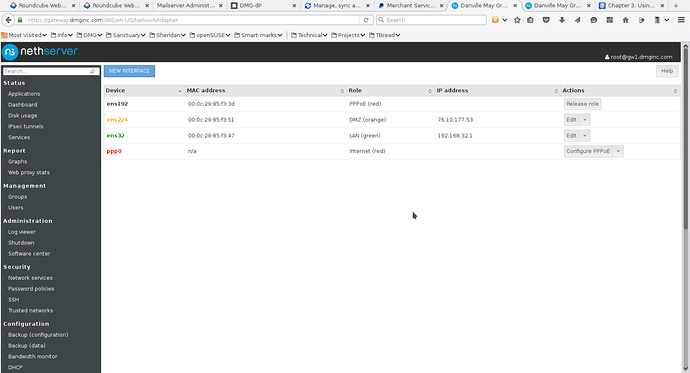 In order to allow access to the server(s) in the ORANGE zone, you must perform two steps with setting up the firewall.

First define an object for your server (or zone). Since in this example, there is only one server, so I selected the Hosts tab on the Firewall Objects page. See screenshot 6. 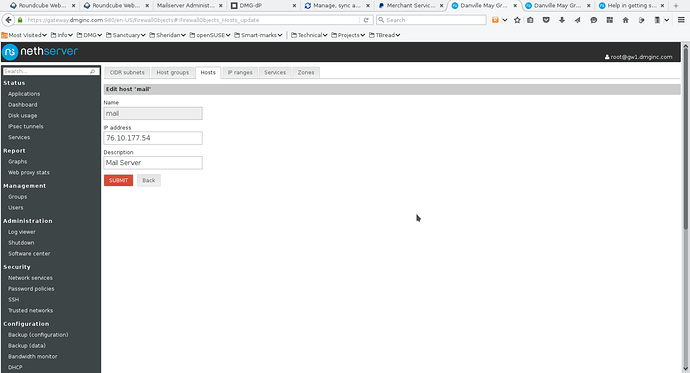 Next on the Firewall rules, you have to add two rules – one to allow traffic to the host object and one to allow traffic from the host object. See screenshots 7 and 8. Screenshot 9 shows the final list of firewall rules. In screenshots 7 & 8, I placed the rules at the start of the firewall. This means that your target host (mail in this example) MUST have its own firewall setup and operational. 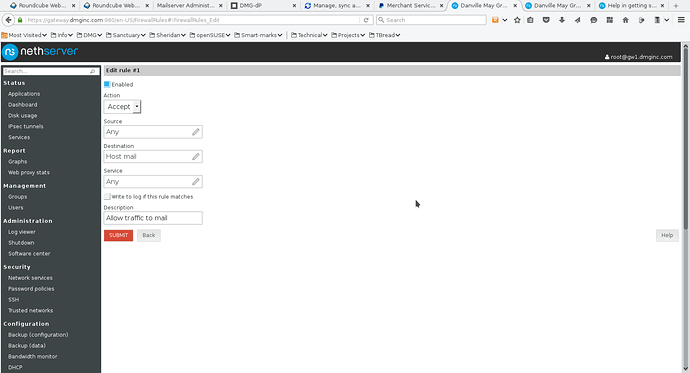 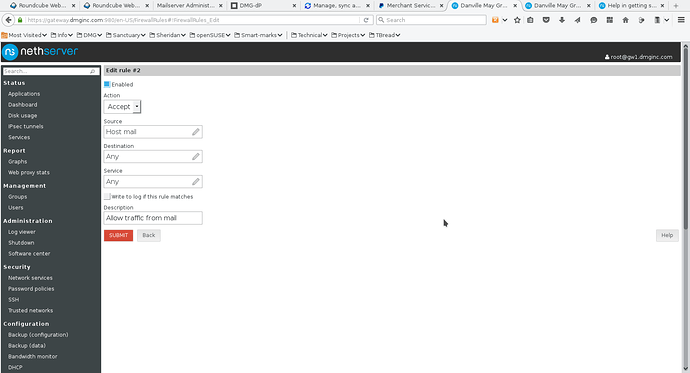 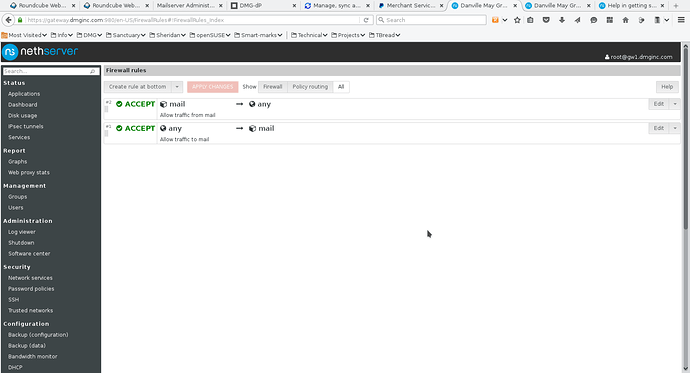 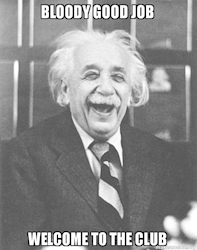 Are you agree to put this how to in the wiki?
Or let a Doc team member put it in the wiki ?
@AbsyntH, @sitz, @Ctek, @stephdl, @WillZen, @Jim

Putting it on the wiki is a good idea. May I suggest that one of the doc team puts it there for now? At the moment I am a trifle too busy to learn a new tool. (But I am sure that will happen in time).