So I have successfully installed and configured Nethserver with OpenVPN and the Basic Firewall on two physical servers.

I now attempted to install Nethserver virtualized on my Proxmox machine, and seem to be having multiple network related issues.

On Proxmox, I have these two virtual Networks:

I use these networks to setup two virtual network devices for my Nethserver virtual machine:

In Nethserver, those network devices provide the Green and Red ports.

I then installed the OpenVPN module and created a road warrior profile.

The first oddity (compared two my other two physical installations) is that I am unable to reach nodes on the Green network through VPN (but the connection to the Nethserver works).

I subsequently installed the basic firewall, and tried to configure a rule for openvpn, but got the following error message: 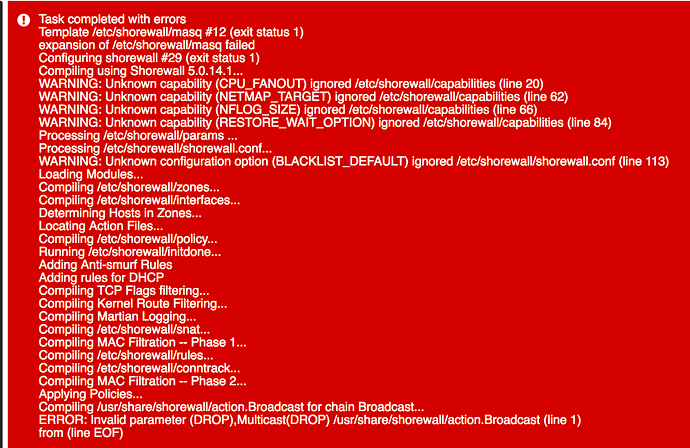 I also have a FreeNAS virtual machine on the same Proxmox machine connected the Nethserver Green network. Strangely, FreeNAS is unable to obtain an IP address via DHCP, while a virtual Win10 machine, also connected to the Green network is able to do so…

So now I wonder: Are there any special network related configurations required to run Nethserver with OpenVPN and Shorewall in a virtualized environment?

Any hints would be much appreciated.

Are there any special network related configurations required to run Nethserver with OpenVPN and Shorewall in a virtualized environment?

Perhaps it helps to create dummy interfaces at nethserver instead creating virtual devices at proxmox.
Please have a look here:

A dummy interface is a virtual NIC for the server without a physical interface card. Why could this be useful? If you rent a root server you will typically get 1 physical NIC only (or pay more). As you only have one NIC, this will be on green role per design. Let’s assume you plan to set up a VPN - LAN to LAN connection to a master server. To set it up you would like to have an internal IP range for your server on the green interface role and the physical NIC with the public IP should be bou…

Hello @bjarnet I have a similar configuration as you do running on an external provider (root server) as well as running on proxmox. If you have proxmox it’s easier to install a second network card to have red and green interface available. If you run on an external provider you usually only get one hardware interface and need to add a virtual nic to have red and green interface.
You do not need to do anything special on proxmox side! 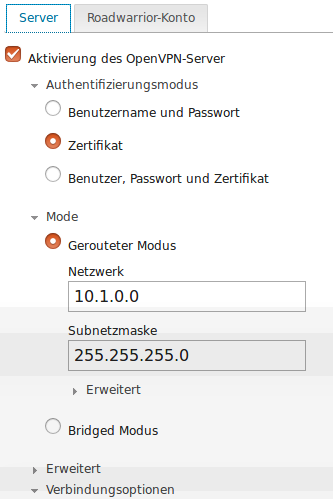 I’m running the same version of nethserver as you do. I have not seen these shorewall error msg before.
I suggest you try to fix shorewall issuses on command line level before.

Here is also a Howto for installing nethserver at proxmox:

But it’s only a general Howto.

Hello all - thank you for your assistance!

@asl: I “fixed” the shorewall issues by reinstalling Nethserver from scratch. The automatic firewall rules as per your screenshot are set accordingly.

@m.traeumner: I did review the tutorial, thanks. Regarding the dummy interface, my server has two physical NICs. One (red) is connected to the Internet Router (DHCP), the second (green) is supposed to provide the DHCP/routing for my LAN, which includes both virtual machines and physical machines.

With shorewall fixed, I conducted some further testing, and concluded that the problem is most likley with the virtual Win7 machine on the (green) LAN that I was trying to reach via VPN. From this VM, I can reach Nethserver and, through it, the Internet on red, but the machine cannot ping any other machines on the LAN, nor can it be pinged by any other machines on the LAN, including Nethserver.

An Ubuntu VM on the same LAN does not have this problem and can be reached when I connect to Nethserver via VPN.

This particular Win7 VM was imported from VirtualBox, and I suspect that something is wrong with the Network driver (I chose “e1000”). I might try to install the VirtIO driver to see if that fixes the problem.

So no problem with Nethserver on Proxmox, and likely just a badly configured Win VM.

Thanks again for the support!

Do you have installed an Internet Security at this machine? Sometimes they block the ping. Here are some examples:

4 Ways to Allow or Block Ping Response in Windows • Raymond.CC

Although Ping is useful for network admin, hackers also use Ping to find potential victims on the Internet. If you can configure your computer to block ping response, it should heightens the level of security for your computer. Here are 4 ways to do...

I had to switch my bridge to DHCP, so that it will receive an IP address from Nethserver.

Now all members of the LAN can ping another.

Thanks again to all for the support.

Can you please mark the answer as solution.