For ram and swap this far has consumed a lot, please Nethserver made to a minimum so as not to eat a lot of ram. Constraints are also experienced by Nethserver users in this post Minimal system requirements for NethServer 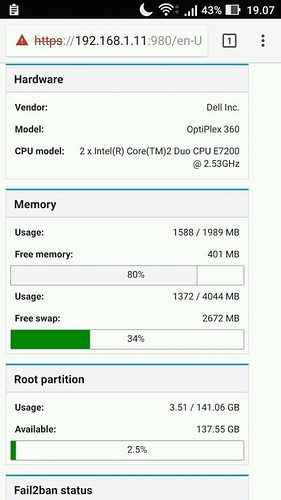 I am not an expert on this, but I understood that (any) Linux distro will use a much RAM as it can grab. On the other hand, it will release resources as soon another service needs more. So it is not realy necessary to increase RAM if you see a more or less permanent high use of RAM.
Anyone who can point to explaining literature on this matter?

Even though I have followed the minimum hardware requirements but when there is a pacakage update I try to update the result is 876MB of RAM is used even though before the package update only 346MB of RAM was used. I tried to install all the packages in the Software Center, but I ate 876MB of RAM and 670MB of swap?

@robb is right: On the dashboard al used RAM is reported; this includes cache and buffers. How much cache/buffers you need depends on your usage. Taking a short cut here: if you have a lot of users and traffic you need enough room for your buffers. See https://www.linuxatemyram.com/

Here my raspberry PI, and i would argue its (just?) over the edge. Its running LDAP 5 users a mail server (without anti virus!), SOGo, intrusion protection and next-cloud and statiscics. 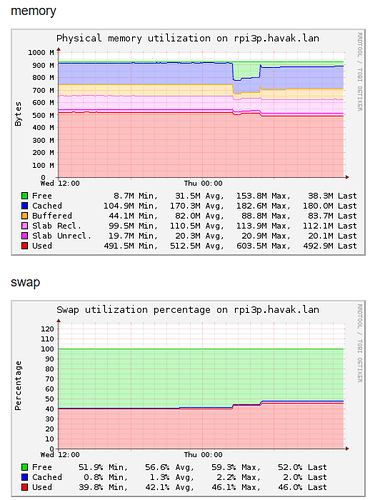 As you can see memory is fully used on the dashboard, nevertheless still some room for buffers (Yellow) and cache (Blue). Red lines is where you sould worry about. (depending on your application of the sever) .

To the antivirus part: (and other memory “hogs”)

Which Nethserver modules have you installed?

EDIT: @oneitonitram AFIAK you try to run Nethserver on modest hardware, can you share your experience?

My experience with NethServer is that it runs quite good with at least 2GB RAM. I have been running it on a VPS with only 1 GB RAM, but with several (web) applications installed, response was sometimes very low.
Now I run it on a VPS with 12GB of RAM and (obviously) no problems at all.

At home I have a ProxMox server and run 1 instance for Gateway with 2 GB RAM and an instance running Samba4 AD accountprovider and all local services with 6GB RAM. These values are overdimensioned, but I have a VERY smooth experience with my NethServer instances this way.

first of all, 2GB nowadays is the real minimo amount of ram you must use… NS and generally speaking linux can work with less that 2GB, but it can’t work as expected.

as @robb said, forget what you’ve been told in windows world: linux is very smart and it will use as much ram as possible 'cause it’s faster than swap (pagefile.sys in windows), even if you’re using SSD

finally, if you want to use NS as a simple firewall (no proxy, AV etc, just firewall), 2GB will be enough… if you want to run other services, you’ve to choose between a slooooooooooowly machine/response or increase the ram

P.S: some smartphones have 6 or 8GB of ram… and nowadays ram is cheap, ssd are too… invest some money and live happy

Thank you for the input

Which Nethserver modules have you installed?

EDIT: @oneitonitram AFIAK you try to run Nethserver on modest hardware, can you share your experience?

I have used nethserver, yes on a very Modest hardware.

The red you see above is because of portainer, this is because I have deployed some other softwares using portainer as well. but if I shut down the portainer apps. then the usage is fairly ok.

here is what is on portainer

@oneitonitram do you experience any “lag” or slow responses when opening and/or using the web applications?

The only Application tht experiences lags is The odoo application.
The other systems I run, like openbpx, do not have an issue.
There is a slight lag on webtop, but only when loading it. Thats is the login period.

the other apps, which are custom running on the server are fairly ok. We find it cheaper to deploy this server for testing purposes. I am running 64 bit os. Maybe the usage my be low with a 32 bit system

@webtop_team can we add a note to the manual about WebTop minimum requirements?

The server is swapping a lot, this means that everything will rung slowly.

@giacomo This was in answering a question regarding running Nethserver on a modest machine.

Yes its true that you should not install so many software with that kind of Ram, or specs,
But I think its worth noting that, most software can run, very ok and have no issue at all on the server. 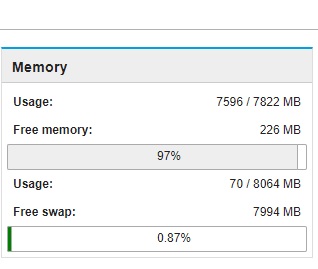 And if through https: \ xxx.xxx.xxx.xxx:9090
something else

Where is it right?

I assume that the values from /proc/meminfo are used like in old server manager, see Dashboard info: showing avaible memory instead of free memory