How will be NethServer 7?

I started some experiments with RPM builds, yesterday. I’d like to reach a v7-alpha1 release very quickly.

My goal for the alpha1 release is having the whole nethserver-iso RPM group available, that means

I’d like minimising code changes, to keep 7 almost equal to 6.6. However some things require an adjustment due to the underlying system changes. On CentOS 7

So I’m thinking about reviewing .spec files and applying some changes to nethserver-lib, to support systemd. 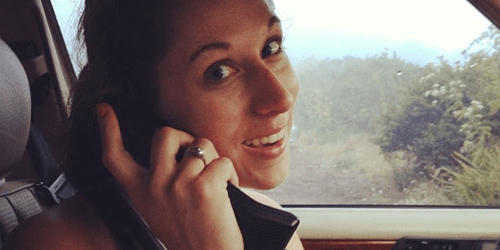 I moved 4 posts to a new topic: Docker support on NethServer 7

Honestly, 7 is what I’m waiting on for Nethserver… 6.6 just isn’t worth the investment for me, php, apache… sideloading, no.

I don’t know; have you any suggestion?

As usual I’m starting from CentOS Minimal. I see rsyslog was installed by Anaconda and this is enough for me for the time being

Honestly, 7 is what I’m waiting on for Nethserver… 6.6 just isn’t worth the investment for me 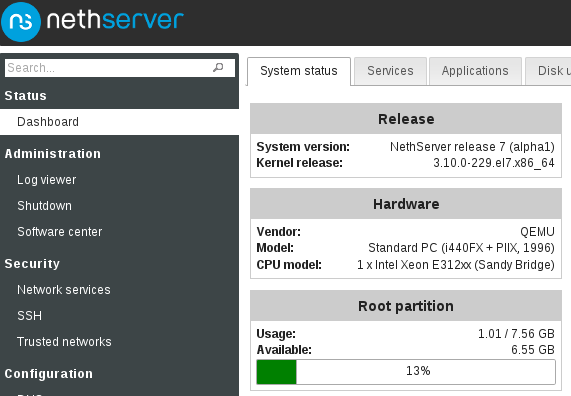 Speachless !!!
But after all i know it’s real

Nethserver 7 ??? Unbelievable… When I’ll able to download it ? I can’t wait

I moved a post to a new topic: Apple AFP support

The ISO is almost completed, and Server Manager seems regular. Now, to move to the next step, I ought to push all RPMs in YUM repos, so anybody can test them one by one.

I hope to finish today

I managed to have:

I also made an attempt with ISO building, but decided to not release the ISO as only unattended installation works!

just to have a taste of NethServer 7, install the official CentOS 7.1.1503 Minimal ISO, then type the following commands:

Additional packages can be installed from the Software Center, but they’ll likely not work.

The next goal is having every service (ahem, at least …80% of them) up and running, fixing RPM dirs ownership. In the next weeks I’ll fix them one by one, stay tuned!

Should we report issues we find while testing? Where?

There are two known issues categories, with their respective issue number:

If the problem you find is related to those issues, you could comment thereon, providing a relevant excerpt of /var/log/messages.

Otherwise report the issue here on Discourse, as usual. Then we’ll see if open a new enhancement on dev.netheserver.org or not.

sorry, I can’t resist: I checked it out on Fedora Server, too…

I wrestled with dnf but finally got Server Manager up: 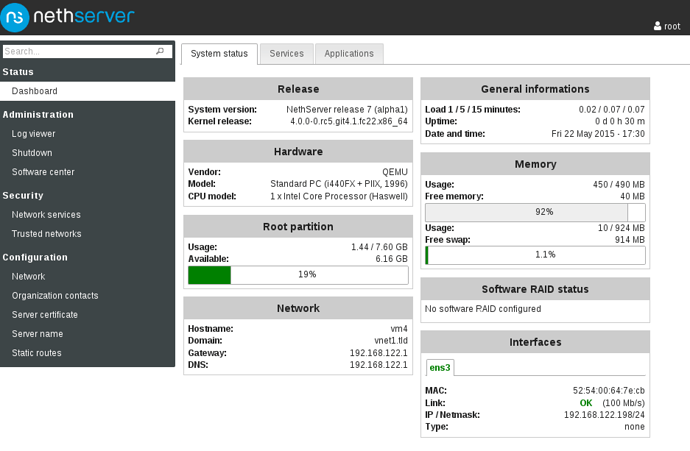 on IBM POWER8, too

Why not? If you have a RHEL subscription… 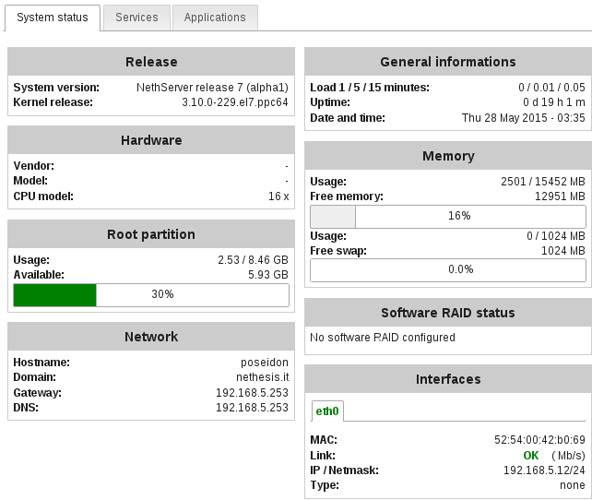 I renamed it, after seeing how fast it built RPMs. It was so POwerful