I am confused about ssl certificates. I currently use Nethservers built in lets-encrypt cert tool to request a server.domain.com cert which only seems to renew over port 80. I also have another server server2.domain.com that uses letsencrypt for some mqtt data that also renews over port 80. I have to keep changing my fire wall settings in my tplink router (port forwarding) every few months so they can auto renew.

I would like to add more servers, so a wild card cert seems like the answer *.domain.com.

Is this possible using Nethserver? Am I doing something wrong?

You can always add multiple SANs to the certificate: 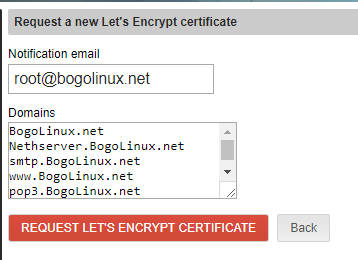 I would like to add more servers, so a wild card cert seems like the answer *.domain.com.

Take a look also to this great howto:

Lots of ways to skin this cat. Here are a few; there are probably others I’m not thinking of:

I’ve been dealing with this issue for a while (pretty much since Let’s Encrypt went public). My first answer was, essentially, the third option I listed above–I got all the certs on my SME box using HTTP validation, then deployed those certs to whatever other hosts needed them. Finding that a bit awkward, I changed to using DNS validation (which involved switching my DNS hosting to Cloudflare at no cost), and am now using a combination of my fourth and fifth bullet points.