My Objective:
Nethserver, to be primarily used as domain controller AD and as fileserver

Questions:
• Is there a network instability with respect to nsdc-server3 or is this behaviour to be expected?
• Can I nevertheless expect good results, when trying to join the domain?
• What can I do?
• Can anybody help me?
Help would be very much appreciated.

Hi @ka.rot, did you enable promiscuous mode in your virtualbox? Please see:

To be sure the DC is reachable I usually run a port scanner against it.

Thank you for your quick response.

Yes, Promiscuous Mode for the bridge is set to „Allow for all VM and the host“

I also did a port scan and got subsequent results, which may be ok

Then I used the port scanner running in Windows host to get some statistics about pings.

Besides, I measured the load on the Windows host

CPU load 2% not dependent on number of simultaneous pings

Memory load 50% not dependent on number of simultaneous pings 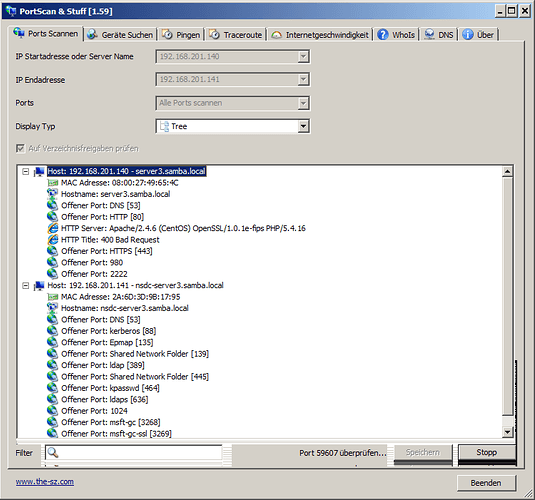 at least I can confirm, that NS7 works very well as AD in my installation. I did not try to run NS7 on Virtual Box, but running on Proxmox.
What might be important to join the domain on the Windows machine is the registry patch as noted in the docs (win7samba.reg). Without it you might fail to join the domain - for me it was mandatory (W2012).

What might be important to join the domain on the Windows machine is the registry patch as noted in the docs (win7samba.reg)

Maybe I mixed it up , because I started with version NS 6.8 before. Good to know!

Me too, I have a working configuration with 6.8. The application of the registry patch has not changed anything. The more testing I spend, the more likely it becomes that I am having a problem with the combination of the Linux Container for nsdc and Virtual Box. For example: I can only get the authentication request in periods of successful pings, whilest in periods of failing pings nothing happens. Another indication is, that answreing to the authentication request in periods of successful pings stops ping answers and leads to time out of pings. I am using Virtual Box Version 5.1.14r112924 (QT5.6.2). I have set promiscuous mode to “allow all VM and the host”. I cannot set promicsuous mode to “allow all”, because this choice is not being offered to me in my configuration. Therefore I may have to try upgrading of Virtual Box.
Regards Karl

Meanwhile I have upgraded VirtualBox to Version 5.1.18r114002 (Qt5.6.2) but my problem persists. I am looking for help desparately.
Regards Karl