I am a routing sub noob, but AFAIK currently NethServer can not manage two paths for the same subnet.
IMVHO you should…

then… make a decision based on routing status

These are the tests that i’ll do…

As Pike suggested, remove the OpenVPN, maybe even remove both VPNs (IPsec too).
I’d at least make a config-save on the NethServer beforehand.
Then recreate the IPsec connection, but manually specify all Specs.
I think it will “just work” after that.

As Pike suggested, remove the OpenVPN, maybe even remove both VPNs (IPsec too).

OK, I deleted the IPsec VPN, and did systemctl disable openvpn-client@pfsense (remember, the OpenVPN configuration was all at the CLI because the GUI is brain-dead in that regard). Then rebooted.

On reboot, of course, neither connection exists. I then reconfigured the IPsec connection, manually specifying the Phase 1 and 2 parameters to match what I’d configured on pfSense (and the defaults there are just awful). It connects just fine, but still has no idea how to route to 192.168.1.0/24:

In your routing table above,

points to the right Interface, but no “next hop” is given.
A “next hop” is the next router responsible for further routing the traffic, needed if the other side isn’t in the same network. Here, as in my home Test-NethServer, this corresponds to the default gateway.

Note:
This is not persistant after reboot.
To make it persistant:
nano /etc/sysconfig/network

or use the static route in the Web-GUI…

The .10 network is for the Neth box to act as an OpenVPN server, though I’ve mostly abandoned that.

This needs to be removed first:

And the VPN should be up when putting in the route…

I’m pretty sure it’s the VPN that’s putting that route in the table. Here’s the output of route -n after deleting the route you gave, and disabling the IPsec connection:

…and here it is after re-enabling the IPsec connection:

The gateway is still missing in the line

I know. But that’s the route Neth adds.

Somehow, maybe due to the “dummy” interface, NethServer is not adding in the needed gateway to this route…

Do you have a link how you did the dummy interface?
I could try that on my Test-NethServer.
I’m taking the easy route at the moment, a Proxmox VM isn’t the same as a hosted server, and my adding a virtual, but still “real” NIC is easier…

Do you have a link how you did the dummy interface?

It’s been a couple of years, but I think it was this:

This is a compilation of 2 discussions on these forums: Dummy Interface (virtual NIC) Virtual network interface for virtual machines Thanks to @asl and @jstammi for doing great work on this topic! add a file for your dummy interface in /etc/sysconfig/network-scripts/ let’s call it ifcfg-dummy0 [image] the kernel module dummy (which is need for dummy devices) is not loaded per default, so we need to add this during server start. Ceate a file dummy.conf inside /etc/modules-load.d. This f…

Ok, I’ll set up a new Test-NethServer, using this instruction and see how far I get.
I’ll get back to you, but might be in 1-2 hours.
I’ll try to connect to the same Site I’m presently using.

Yeah, I have some actual work to do too. Thanks for all the help, though, and at least it seems like I wasn’t missing something totally obvious. For the time being, I’m going to disable IPsec, delete that route via 173.249.19.1, and re-enable OpenVPN.

Something in your setup is screwed up, now just need to pinpoint the problem…
Step one in solving an issue!

Took a while, but i did want to replicate as accurate as possible your situation.

So I had to first grab me the Centos 7 minimal, and set up a basic centos like on a hoster.
This time I only allocated one network interface.

I followed more or less exactly this instruction - judging from the IP, most likely the same as you did…
https://wiki.nethserver.org/doku.php?id=virtual_network_interface&s[]=dummy 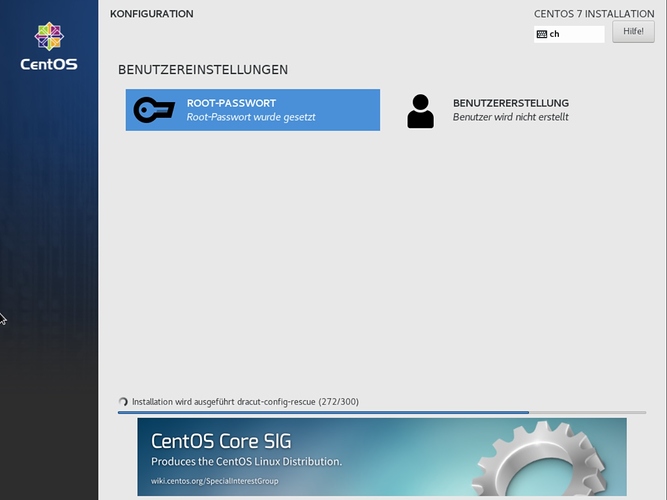 Then added the “dummy”.

Configured the VPN - as yesterday, but with the relevant differences:

First time up, however:

I did forget first time to adapt the target network on the other side, corrected.
It still took several restarts on the VPN (on both sides!) entailing me having to switch several times from Home WLan to Mobile Hotspot WLan…

And things start to look better:

Pinging from Side B to my “hosted” NethServer worked: 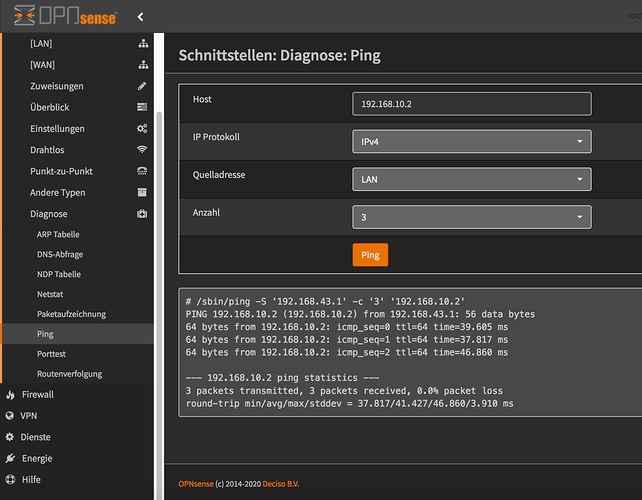 Pinging the other side took one or two restarts, but finally worked: 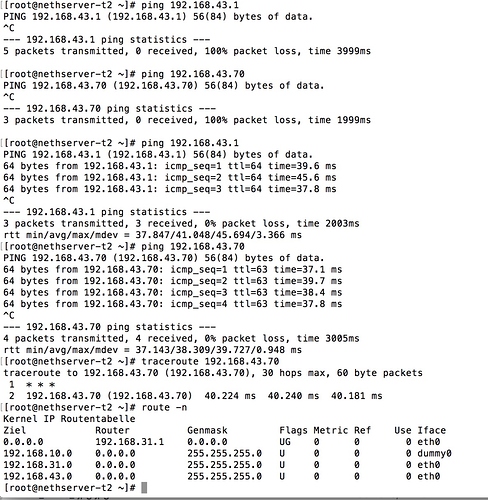 Either there’s a difference somewhere on the way from your setup to mine, implying differences in Versions at the time of installation, accumulated till current today.

Maybe software installations / testing / OpenVPN / whatever unknown is interfering with the correct setup of IPsec and routing on your setup. This could be some minor, easily overlooked detail, like wrong permissions on some routing file set by starting the VPN. And not able to remove or correct the settings therein…

It could also be the digitalised version of Murphy, throwing a digital wrench into the gearbox just for the kicks…

If this were my server, I’d want it fixed, just not to run into lurking issues in the future.
And routing / VPN I consider basic musts!

Depending what you actually have / use and run on your external NethServer and also if you used that box to run tests, it might be worth it!

I leave it up to you to decide, I just wanted to try to collect the facts, as identical to your environment as possible. As in good law: Present the pure facts, envision and present the follow up logic, and let the court decide if this is sound!

Installing a minimal OS like Centos, and NethServer over it is not quite the same thing as installing NethServer directly, but is certainly much closer than eg a debian install, then Proxmox over that. Just bootable ZFS stuff alone can be a headache in Debian, whereas in Proxmox this is really smooth…

So it’s not really a bug, but something “irregular” on your system not allowing correct routing…