Interface-update event during Nethserver install over CentOS on GCP

After launching the command

the instance become not longer accessible via ssh.

There is someone know what command performs interface-update event and if this to something to firewall rules or change ssh port?

The instance of the virtual machine after this remain unreachable also after a reset (reboot).

had a similar problem when I did the same on my personal server (hosted on a VPS)
AFAIR, during that event, the ipv4 stops working (ipv6 keeps working)

Thank you @zamboni! I’ve found it.

It was date one year ago and at the end of it @giacomo talks about a bug on the way of resolution but without any other updates.

The old bug is already fixed.

I think this is a different problem.
Have you got console access to the machine?

I’ve console access until in /var/log/message appear the log about the event interface-update
After this I must reinitialize a new istance of CentOS (fortunately it does not take much).

If you want, I can create a new instance of CentOS and than performe a new Nethserver Instalation over it, the best should be doing it with a more verbose log. There is an option to do this?

I’m wathing also /var/log/nethserver-install.log who is just the standard output of the command

Before nethserver-install, does the machine have any IPv4 address assigned? What does ifconfig -a says?

@davidep this is the ouput of ifconfig -a

To see how network configuration is probed and persisted to networks DB, let’s try to exclude interface-update from system-init:

Then run nethserver-install. At the end, let’s see what say

@giacomo do you think there are other useful commands here?

To see how network configuration is probed and persisted to networks DB, let’s try to exclude interface-update from system-init:

This is what I have…

sorry, that stuff is not installed yet

Edit the nethserver-install to skip the command on line 104

Anyway (thanks to @giacomo) you’ll probably hit a routing problem due to mask 255.255.255.255, which is not configured correctly, thus the VPS becomes unreachable the first time interface-update is executed.

You could create /sbin/ifup-local executable script that fixes the routing table each time an interface is ifup-ed. See /etc/sysconfig/network-scripts/ifup-post for details.

For the next step I need some more info…

Which symlink I should remove?

Anyway (thanks to @giacomo) you’ll probably hit a routing problem due to mask 255.255.255.255, which is not configured correctly

Did you have some resource to indicate for going in deep to this topic?

For now, however, thank you very much (also to @giacomo)

Which symlink I should remove?

Did you have some resource to indicate for going in deep to this topic?

The GATEWAY setting in ifcfg-eth* must point an IP in the same subnet. Now you have a single IP subnet, so it does not work. The solution would be setting up a static route, but /etc/sysconfig/network-scripts/route-* is overwritten by interface-update event.

Thus, as last resort, /sbin/ifup-local seemed viable to me… 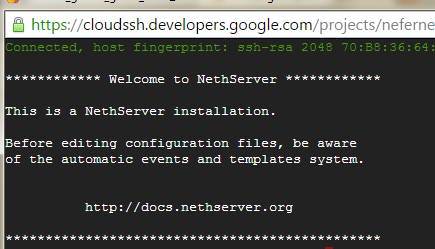 Mission completed… soon a report of the steps needed to run a NetServer instance on Google Compute Engine.

Just one impression. Google Compute Engine management interface is more clean than the one of Amazon EC2… but NethServer installation on it is a little more tricky…

Thank you @davidep for the support…

soon a report of the steps needed to run a NetServer instance on Google Compute Engine.

Good job @etino I do want it, keep us updated!

How to run Nethserver on Google Cloud Platform Howto