Hi,
I use Nethserver’s Data Backup and make a backup every night to a Nextcloud directory on another server using Duplicity.
After the backup, Duplicity sends an email about the backup and indicates the disk usage at the end of the report.
The following was in the report tonight:

This really annoys me because I don’t know which server it applies to, the Nethserver or the Nextcloud server?

Did you run out of disk space somewhere or is Duplicity calculating incorrectly?

Could someone help me, because it wouldn’t be good if the save stopped or if one of the disks was full and I didn’t notice it…

Thank you for your help.

It seems you used snap to install Nextcloud and it has limited disk space.

Those are “loops” like a virtual sections for a snap containers. Interesting is that sda2 is type of ext4. Do you have only 1 HDD in you virtual machine? I assume yes, then seems it is sda. You have to: Ensure that you have an up to date backup. ...

I don’t understand what happened during installation. I installed Ubuntu 20.04 and downloaded Nextcloud-21.0.1.zip from download.nextcloud.com. I updated it after installation, but I don’t know how it became snap… Maybe I downloaded the wrong one?

The output of lsblk -f is the same for me as in the link you attached:

Unfortunately, I don’t understand what should be resized and how? Should loop2 be resized? I can resize an LVM, but how can this be done? So far I can’t find a solution for this using Google…

Thanks for your help.

Ubuntu is silently converting traditional applications into snaps (if snaps for that application are available). Don’t know if that’s your case as I guess web apps installed manually are not affected, unless you installed the snap version.

On Ubuntu you can check it with:

But from the the df -h output looks like it is a snap:

Otherwise, the issue could be the assigned storage quota on Nextcloud… but doesn’t seem to be the case.

Snap apps are sandboxed so they always show 100% used. Their settings and data are actually stored in your home user folder. (source)

You can check what space is taking the snap with just lsblk (without -f):

For nextcloud-snap data you can look at: 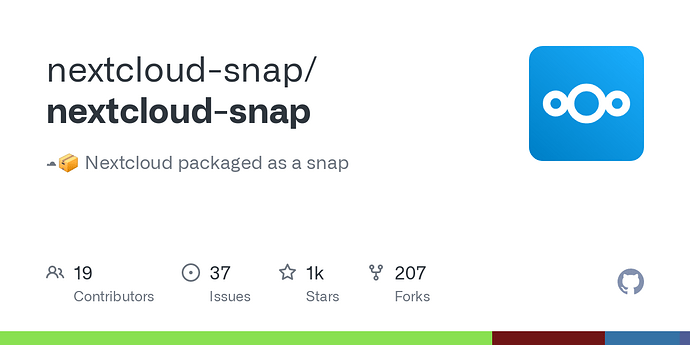 ☁️📦 Nextcloud packaged as a snap. Contribute to nextcloud-snap/nextcloud-snap development by creating an account on GitHub.

Thank you for your help. I am at a loss when faced with this problem.

I downloaded the zip file and extracted it to the /var/www directory. After that, I set up Nextcloud manually and installed the data directory under /opt/nextcloud.
Nevertheless, /snap/nextcloud is created and the snapd service is running.

I started the data backup to Nextcloud on the Nethserver, now it runs and writes the backup to the designated directory of /otp/Nextcloud…

Now I’m waiting for the backup to run and to see how much disk usage is in the report.
It seems to me that Nextcloud is installed both normally and via snap, but the directories under snap are empty.

What could this be?

As you chose to install NextCloud on Ubuntu, not on NethServer, and it’s your Ubuntu installation giving you issues, why not ask on the Ubuntu forum?

We NethServerians don’t like using non open source software, like snap. The source for the snap store (server side) is NOT available…

Hi,
sorry but I needed urgent help and I’m not a member of the ubuntu forums, so I thought maybe someone could help me here quickly.

Unfortunately, it is not advisable to save Nethserver data to Nextcloud running on Nethserver. I think you understand this…

Therefore, I had to quickly create an auxiliary server just for Nextcloud, and the fastest solution for this was the Ubuntu installation. This was necessary because I had not yet completed the real backup server because there were HDD problems with it. Tomorrow I will get new HDDs and then this problem will be solved.

I promise I won’t burden the forum with such problems next time, but I had no one to turn to.

Thank you for the help of @mrmarkuz and @dnutan, based on the suggestions, I managed to solve the problem temporarily by disabling snap and thus saving works. The cause of the problem is currently unknown to me, but only tonight’s save should work on this server.

Thanks for all the help.

Unfortunately, it is not advisable to save Nethserver data to Nextcloud running on Nethserver. I think you understand this…

I think that this affirmation need some motivations…

Therefore, I had to quickly create an auxiliary server just for Nextcloud, and the fastest solution for this was the Ubuntu installation. This was necessary because I had not yet completed the real backup server because there were HDD problems with it. Tomorrow I will get new HDDs and then this problem will be solved.

Backup on USB or SMB was not an option?

I think he was forced to:

Therefore, I had to quickly create an auxiliary server just for Nextcloud

“Unfortunately, it is not advisable to save Nethserver data to Nextcloud running on Nethserver. I think you understand this…”

Any reasonable person would simply use a USB, or SMB or NFS network share - any host capable will do. No normal person would set up Nextcloud just to backup another server!
Nextcloud as backup target only makes the whole backup twice as long (slow), and introduces complexity for no sensible reason. NextCloud only offers disadvantages as backup target, not a single advantage!

Obviously too complex for our user here, and was too lazy to ask in Ubuntu’s forum…

You have a good sense of humor…

My backup server is not working due to a HDD problem, I saved its data on a USB over the weekend. I don’t have another USB drive at home for backup.

Unfortunately, the two problems appeared at the same time, so I had no better idea. I could have chosen a different solution, I could have installed FTP or Samba, but I would have kept Nextcloud for other purposes later on, so I chose this.

Now I’m familiar with Ubuntu, although I don’t like it, but it was installed, so Nextcloud was installed on it.
Fortunately, there was someone who wanted to help and did so, so I found the cause of the problem and the solution. I thank them for their help.

I apologize once again and the topic can be closed from my side.
Greeting

Humor is if one can still laugh about it!

I was just traying to inform you that using NextCloud (I’m a big fan of NextCloud on NethServer) as Backup is very slow and inefficient… NFS is for linux the fastest, SMB is also quite usable. FTP? That’s outdated! It’s fast, OK, but - FTP modifies the time/date stamp on all files (normally).

Thanks for your comments about the save, I agree with you.

But at the moment I didn’t have a working server and I don’t use NFS. Samba, on the other hand, is only available on the Nethserver, so it is not advisable to save on it.

I just received your new HDD and I’m going to start uploading the data on my backup server and then I’ll continue solving the problems.