DNS problem when NS is used a domain controller

I think I have a DNS issue…

When trying to map a specific server on the LAN to be accessed over the internet via the reverse proxy, only the non-domain bounded machines are able to access it. The domain machines don’t ever see it.

When I manually bypassed the DNS from domain-bounded machine and ran NSLOOKUP, I was able to access the url machine.example.com and I have no issue using the reverse proxy then. Reinstall the DNS of the domain and voilà… no longer working.

I tried manually adding a host via the DNS gui in NS = not working and I found no other location to add it.

I will shortly deploy a number of web services via a Kub. cluster and I wanted to use a reverse proxy + domain combination to avoid having our employees use port numbers and ip addresses.

Should I add something in DNSMASK? Please help!
Any will be appreciated!

NB: on a different topic, I really like the simplicity of NS vs other Linux PDC.

PFSENSE is the gateway, dhcp and reverse proxy.

If you were using an internal DNS, as would be the clean and correct way to do this task, this would not be an issue at all!

At the moment, you’re essentially forcing all internal traffic trying to reach an internal server - making all such traffic pass through your PFsense twice, halving it’s throughput.
The professional term for what you’re trying to do is “Hairpin NAT”, allowing an internal host to use an external IP to reach another internal host. (Passing through the firewall twice!).

The use of Hairpin NAT to me as a pro signifies:

The above is without any form of valuation, it’s just a list, non prioritised…

As the old saying goes, all roads lead to Rome… You will get there…
Some roads may be less safe, more hazardous than others.
Some may be easier and less harzadous.

I’ve already mentionned I was lacking the DNS skills. No surprise here. I’ve tried using NS as the DHCP and it didn’t work any better.

Used NS as DHCP and wasn’t more efficient. DHCP on Pfsense has some advantages including simplified control of VPN trafic.

Any suggestion to resolve the issue?

I tried manually adding a host via the DNS gui in NS = not working and I found no other location to add it.

Did you add machine.example.com pointing to the pfsense box?

…oh… and by the way, I would be happy to segregate my traffic internal and external as it was before using NS. Unfortunately, that’s the reason why I’m asking for assistance.

Both NethServer and PFsense have more or less capable DNS servers built-in, at least for internal DNS usage.

Note:
I’m an OPNsense user, a fork of PFsense with much the same modules and capabilities. Just the GUI is much better on OPNsense. And the available source code actually compilie, not quite so for PFsense…

The idea behind having internal / external DNS servers is simple:

Your internal DNS server should be able to resolve everything concerning your domain and network. That means: every PC, notebook, smartphone and also printers and other hardware with IP. And where possible, internal IPs. Where not possible, eg an externally hosted website, use the external IP.

External DNS should NOT know these devices, it’s also a security concern…

Your external DNS Hoster, Godaddy, only needs to know and serve out IPs relevant for the Internet.

The only caveat is: you need to enter every external host at least twice…
Then again, how often do these entries change?
Do you change your external hoster every week? Not really!

→ This concept is known as Split-Brain DNS…
Basically, it can be seen as a “need to know” basis for internal and external hosts…

I’d suggest using the NethServer as primary, and the PFsense as secondary internal DNS server.
These can be entered in your DHCP Server (PFsense), for distribution to your internal clients.

This way you can point internal hosts right to the correct internal IP of whatever container you’re trying to reach, bypassing the firewall completly.
External traffic will pass through the firewall as always…

Important: Do create at least an entry for the NethServer itself, but also one for your AD.
And for the AD, do add in a wildcard (like *.ad.domain.tld)…

→ All AD clients get all information needed for correct AD working - and AD IS dependent on DNS, eg for clients to find the AD Master… 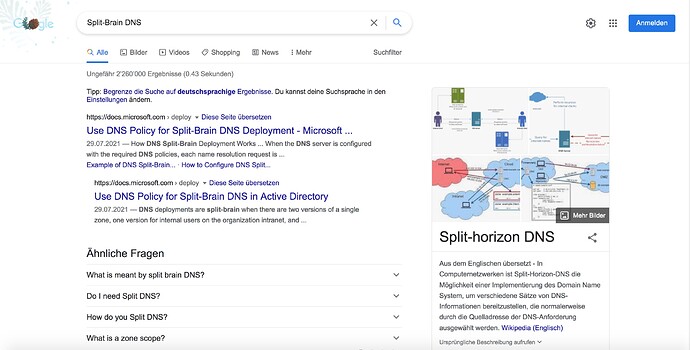 Thank you for the explanation Andy!

Your internal DNS server should be able to resolve everything concerning your domain and network. That means: every PC, notebook, smartphone and also printers and other hardware with IP. And where possible, internal IPs. Where not possible, eg an externally hosted website, use the external IP.

t, since that migration to NS, if I use DNS resolver and map an IP to a domain name i.e. 192.168.2.25=machine1.mydomain.com it just doesn’t work. Same for haproxy. Works if I route via internet but again, only for machines on the LAN that are not joined to the domain. Any idea why?

I’d suggest using the NethServer as primary, and the PFsense as secondary internal DNS server.
These can be entered in your DHCP Server (PFsense), for distribution to your internal clients.

I just read about split-brain DSN. Very interesting but I actually don need this if I could resolve my servers internally.

Let me rephrase my question differently now that I know more. Where in NS can I configure that host1 is reacheable via host1.mydomain.com. I tried that DSN gui. not working.

since that migration to NS, if I use DNS resolver and map an IP to a domain name i.e. 192.168.2.25=machine1.mydomain.com it just doesn’t work. Same for haproxy.

Please elaborate on the above…

HAProxy? It’s OK, but nginx or even apache on NethServer may be a better choice…

So far, I’ve mainly used the NethServer for LetsEncrypt, even though the OPNsense could do that just as well.

The main reason for me is AD. A lot of Apps, especially Java and PHP programmed stuff require a valid SSL cert on the AD, if you want to use AD authentification. MeshCentral & Guacamole are two examples on the OpenSource/NethServer side which require a valid SSL cert for AD to work. EcoDMS, a commercial Java programmed software in common use in German speaking countries is another good example…

If using LetsEncrypt on NethServer, and NethServer is your AD, this is easily achieved.
You need to enter your AD (both name versions!) in your external DNS and - like your NethServer - point them to your firewalls external IP.

This will automatically copy the new certs to the NDSC container in NethServer, enabling your AD with a valid SSL cert.

Here’s a more complex problem, probably along the lines of what you’re trying to achieve later on with your containers…

At home, I have a PI-Hole.
It’s real hostname is:

and has the internal IP 192.168.31.29, which is distributed to the DHCP clients from my DHCP server, my OPNsense firewall.

This PI-Hole only uses http, no https.

My PI-Hole will be displayed correctly, with a correct SSL cert, even though I’m behind a dynamic IP address… What gives?

At home, in my LAN, my NethServer handles all LetsEncrypt SSL certs. It has the name “pi-hole.r7.anwi.ch” entered in as alias for the PI-Hole.

Note: This is NOT the real hostname of the PI-Hole!

Internally, pi-hole.r7.anwi.ch also points to the NethServer, as the external DNS. The external DNS can’t really resolve the real hostname of my PI-Hole.

The NethServer acts as reverse Proxy, and adding in SSL protection at the same time. Externally, it “removes” the SSL layer before forwarding the traffic to my PI-Hole. The PI-Hole sees no SSL traffic and answers in normal http, which the reverse proxy attaches https encapsulation…

This gives me the best of both worlds.

Clean SSL protection and same access internally and externally, but also a seperate access via internal IP or real hostname if I need to eg update the PI-Hole or it’s OS.

Hope this is all somewhat understandable… 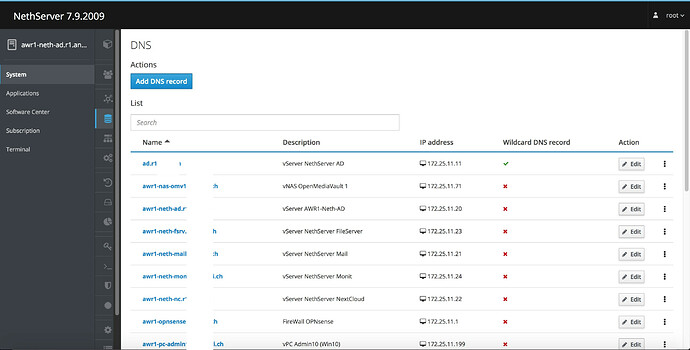 The DNS on NethServer can’t correctly handle CNAMEs, the only exceptions are CNAMEs pointing to NethServer itself. These can be entered in the first page of cockpit, see “aliases”…

Internally, pi-hole.r7.anwi.ch also points to the NethServer, as the external DNS. The external DNS can’t really resolve the real hostname of my PI-Hole.

How do you point it internally? Do you mean adding a DNS record in NS via the GUI? 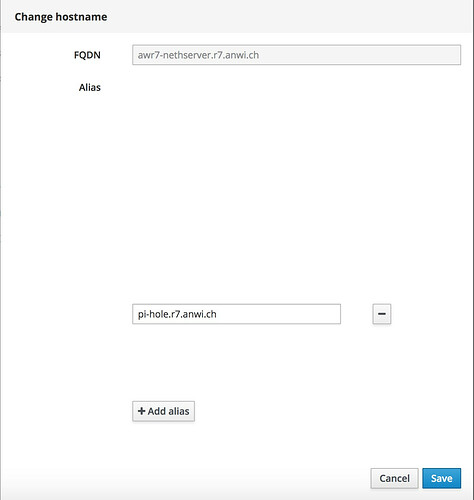 I see all your DNS entries. That’s exactly what doesn’t work in my NS implementation (I also use a VM for NS).

Regardless if I add a DNS entry with server/ip combination, it doesn’t work. None of my clients can resolve the names afterward.

please see the pic as a confirmation:

You can see the IP, is an active IIS,
the URL can’t be resolved despite being entered in DNS records and that machine being joined to the network.

That’s exactly what I’m trying to understand… why it isn’t working!

Same result if I change the IP to the IP of my reverse proxy. Can’t resolve any entry in the DNS field.

Sorry, I think I fell asleep…

Opening a Browser is not a way to test DNS.

Using a console (DOS-Shell) and nslookup would be correct.
After all, it could be a browser plug-in issue…

Did you try different browsers and flush DNS cache on clients?

NB: sorry had to remove all dots (.) in the domain names as per your forums’ policy

just wondering if were using lets encrypt would we just change