Not the first time I see a CentOS based Distro, being declared dead/dormant on distrowatch, but you might want to communicate with them

News and feature lists of Linux and BSD distributions. 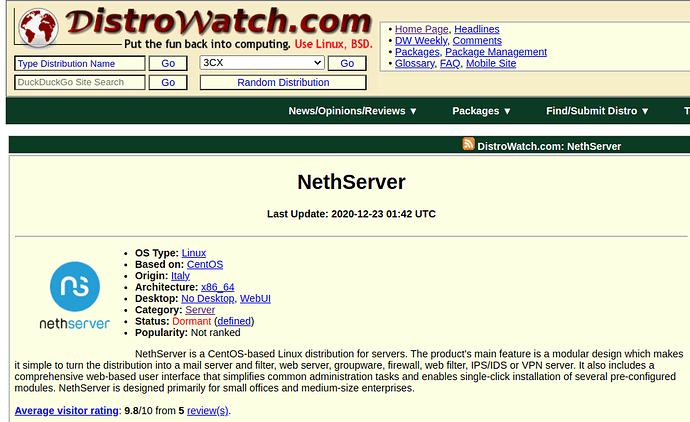 I think it’s marked as dormant because there is no new release.

@alefattorini could you please take care of it?

What is the difference between the Dormant and Discontinued status?

The Discontinued status is reserved for projects which are no longer being developed. There is no outward activity and no roadmap for new releases. Projects which no longer have websites will also be marked as discontinued.

We often receive e-mails from projects which have been Dormant and plan future releases (or from fans of dormant projects) asking us to update the distro’s status to Active. This will be done automatically when a new stable release is published.

Won’t change anything. IMVHO, Distrowatch should at least provide some sort of “under support” status.
Might not be valuable for them but… it’s still a difference between some distros and others.

Yes, we just need to release a new version and send them the update.
I can take care of it

Time for a ISO respin? Support

NethServer Version: 7.9.2009 I’ve read only few hiccups installing NethServer on fresh hardware. I know, should knock to CentOS for a better knowledge of supported hardware (and business/enterprise hardware is often better supported than custom/home). But. Worthwile to consider a respin of the ISO with updated packages? Redhat stated RHEL 7.9 is the final RHEL 7 release (source) but sometimes at least less seasoned kernel might be useful.

Someone here said that was not “that interesting” to respin…

Won’t change anything. IMVHO, Distrowatch should at least provide some sort of “under support” status.

Yes; as I remark, that situation happened to a lot of RPM based distro after CentOS passed to the dark side of the Open Source

I wonder what ClearOS did, because they were also under the dormant status for a while, and now they are back in business, even if their website and forum don’t talk about any new version.

Yes, we just need to release a new version and send them the update.
I can take care of it

Maybe I totally misread it. The “new version” referred here may be… just the less unstable 8.0.

It’d be irreparable loss if NS has been deprecated…