There is a Feature topic about this that doesn’t actually offer much help. I thought I would post my steps in case it helps other people as well. I mean, it’s one thing to know Zoom is evil, and it’s another to actually help people do something about it.

There are comments like Follow the Jitsi documentation, and you will have a working installation in 10 minutes but that assumes you have a decent knowledge of Docker and other components. If you’re using Nethserver, I assume you like me and you are not a seasoned sysadmin.

So here are my steps to get us a bit more than just a basic install.

Things that could be improved on

The Jitsi Docker does support getting a cert through LetsEncrypt but I had issues getting this to work. It was failing on the ACME request - I think because of the non-standard HTTPS port and because I didn’t have a reverse proxy in place on the domain. In any case, I decided to just utilize the cert that is on my Nethserver because then I know it will get updated automatically.

There are two firewall changes we need to make.

You can read more about it in the Nethserver Docker docs , but basically the default network for docker images does not allow access to our Nethserver for security reasons. There is a special aqua network that will be set up with our Docker install that will allow docker images to access local ports on our Nethserver. That is how we will let Jitsi use our existing LDAP.

I think there is currently a bug in the Jitsi docker image that mixes up ldap:// and ldaps://, so I just opened both ports and things seem to work.

The docs give an example command to open up the ports, and for me my command was:
db dockrules set jitsiLdap aqua TCPPorts 389,636 status enabled
signal-event firewall-adjust

Using the Cockpit UI, go to System > Services > Add Network Service
For me, I had to run this as the root user to get the network options to show up. We want both Green and Red interfaces for this to be accessible from the internet. 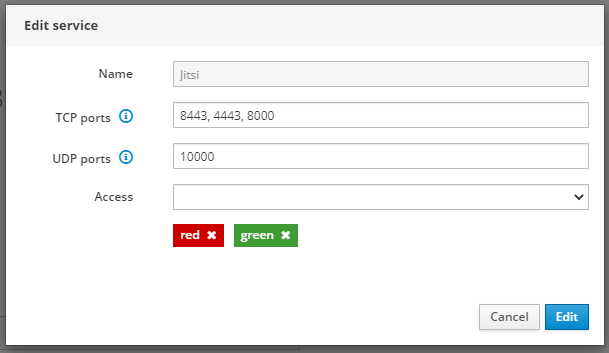 Now we have our address, we have Docker, and we have our firewall updated. Now we just need to get the docker image and configure it.

Get & Configure the Jitsi Docker image

Like the other post mentioned, this article is pretty good but there are a few things we should consider on our Nethserver.

First, we should be putting all of our custom apps in the /opt/ folder. So for me, my jitsi folder is /opt/jitsi

but on the last step, instead of putting the jitsi config under root, let’s keep it under our opt folder, so the command looks like this:

As part of the testing of Jitsi we need to erase this folder frequently, so I prefer to have it in this folder instead of in the root of the system. Also, this follows the Nethserver convention of keeping apps under /opt/

A few notes about these config options:

We need to make a change to our docker compose file to allow it to utilize the Nethserver certificate instead of the docker image trying to get it’s own cert from Let’s Encrypt.

Using the path to our cert that we saw in the steps above, add two volumes to the docker image (the last two lines):

Now that we have edited the env variables and included our certificate, we just need to run the command from the Jitsi quickstart guide to compose and launch the docker images:
docker-compose up -d

Adding the Docker to the aqua network

There is probably a way to do this in the Docker compose file, but I’m a total noob so I just did it through the web UI.

Hurray!
You should now be able to access your Jitsi server at: https://meet.mydomain.com:8443

Note that the port is important. I have not gotten this to work through the Nethserver reverse proxy yet so we can serve it up on the regular HTTPS port.

I hope this helps someone else! I’ll try to clean it up a bit more later.

Wow, what a wonderful topic @djx Thank you very much for the howto.

I am glad you even implemented the ldap authentication on the same to get it to work, highly appreciated.

Clap clap clap…medails to this man

@stephdl he wrote it like it was written to a 12 year old.

assuming you dont know and working up from there

Thank you all! I’m just trying to contribute something back to this great product and community.