It looks like the values displayed by the Graphs/collectd module for the interfaces are wrong or unusual. The totals transmitted or received values looks like multiplied by a factor ten.

Here are some screenshot to show this.

Then I zoomed roughly on the time period during which the file downloaded : 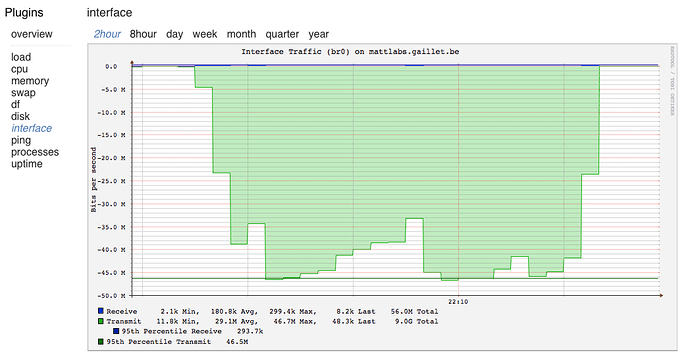 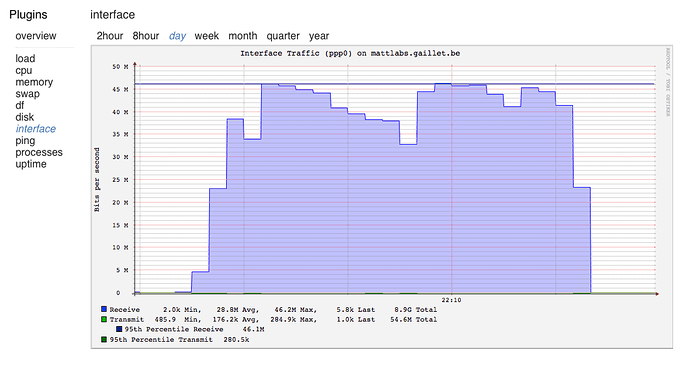 Both graphs show the correct download speed but the totals in received or transmit values are wrong : they report +/- “9 G” (G what ?) when I actually downloaded +/- 1GB (giga byte)

Could it be that the graphs reports Gb (giga bits) instead of GB (giga bytes) ?? In that case it wouldn’t really make sense since we are all counting bytes and not bits.

The max receive speed recorded for my own computer is said to be 5,1Mbit/s, which is probably actually 5,1 Mbytes/s !

Can anybody confirm this ?

Thanks for your attention.

The values are set in bits instead of Bytes. That is a factor 8.
Look at the vertical axis: it says Bits per second.
A download speed of 45Mbit/s looks normal to for a consumer internet connection.

Yes that’s what i was thinking to for collectd. My opinion is that the Totals should be displayed in MB.

Regarding bandwidthd, the units look plain wrong to me.

Anybody else than me starring at the units ?

Although I’m not aware of issues regarding the values displayed by the collectd module. I’m sure that @filippo_carletti can give you a better answer.