My backup neth server, which is acting as a hotsync target, has three network interfaces–one is green (which had been a 10G interface), the other two are unused. I needed to remove the 10G NIC/cable and use a different interface. Powered down, removed cable, plugged in a network cable to one of the other interfaces, and did db networks setprop enp0s25 ipaddr blah gateway blah netmask blah role green followed by signal-event interface-update. That didn’t quite work, so I also did db networks delprop those same properties on the old interface followed by another signal-event interface-update. That seemed to do the trick–I could ping in and out, ssh in, pull up the server manager, etc.

However, I was still getting error messages from hotsync. Figuring that maybe the new interface wasn’t fully configured, I went to the server manager, Networks page, edited the configuration of this interface, changed nothing, and clicked save. Big problems: 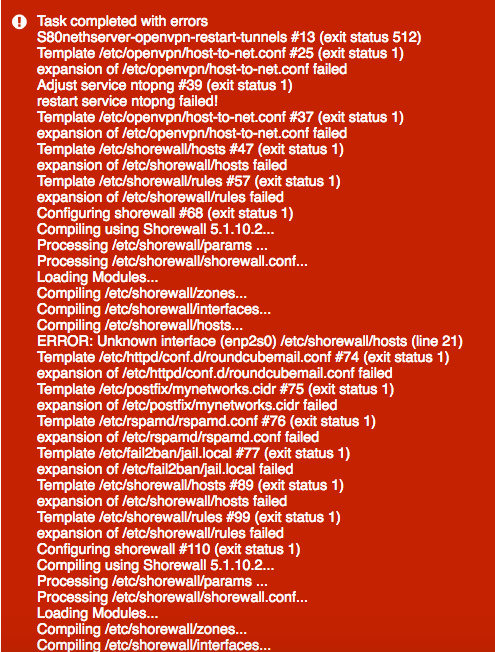 Not sure what’s up at this point. Server manager still works, SSH still works, but hotsync is still throwing an error every 15 minutes. Thoughts?

Firewall rules are empty?
Are network segments correctly configure into network section?
Do firewall know that interfaces are changed?

I hadn’t installed the firewall, AFAIK. I tried rebooting, and that’s stopped the hotsync error messages, but now I get this message on the dashboard:

There’s clearly more reconfiguration needed–but I can’t see where it would be.

Is there Samba4 AD account provider configured? Then the green interface has to be bridged to be able to host the NSDC container. This could get you in trouble when you change the nic… (just a thought)

No, the accounts provider is local LDAP.

Maybe the service status tells us something:

I compared to my servers and I recognized that all interfaces have a role prop even if it’s empty.
And I think the bootproto for enp2s0 could be deleted.

My networks db to compare:

This seems to have done it. Shorewall is running, and the warning is gone from the web GUI. Thanks for the help.