NethServer Version: 7.9.2009
Module: SOGo
Hello,
My Nethserver is DC for a windows domain. It does some file sharing and hosts SOGo. It has worked successfully for about 1 year. The user’s use Thunderbird to sync with SOGo through cal/card dav. As of about a week ago the phones (android and iphones) will not update their calendar/contacts to SOGo. The internal/green network still functions properly.
My setup: I have an IPFire firewall/proxy setup with red(internet), green(lan), orange(dmz), it is also running openVPN and my openvpn clients can still connect and have access to resources as if they were on the lan. Nethserver has red and green interfaces I also setup letsencrypt. I connect the orange ipfire to the NS red interface and green to green. I port forward http traffic to the green network. I port forward the https traffic to the orange network and then on to the NS red interface. I can reach my default NS webpage hosted on port 80. The default of Apache is being used. I cannot reach my webpage by https. This may not be the best way but it was the only way I could figure out.
I first thought it was a firewall issue but after checking the logs and running tcpdump on each interface it seems to be getting through the IPFire dmz and I can see the sync packet when I tcpdump on the eth0 and eth1 interfaces of NS. My knowledge of tcpdump and packet analyzation is extremely little, so I could be interpreting it wrong. I feel like the problem lies with NS somewhere. Possibly with apache. But I am reaching the limit of my ability.
I inherited this job after the gentleman I used for tech services past away. He introduced my to Linux and I’ve been setting up Linux boxes and learning what I can for about 4 or 5 years. I will do the best I can to answer any other questions, but it may take a bit if I have to research the question to understand it.
Thank you all.

and welcome to the NethServer community.

Are there errors in the logfiles /var/log/messages or /var/log/sogo/* ?

This is from SOGo log. I ran a sync from Thunderbird, locally, which works. I then ran one from my phone on the mobile network and nothing showed up. Like SOGo never saw it.

This is from var/log/messages.

Also, the server had been running for about 66 days from my last reboot. I may have done an update during that period. (I was still on 7.9.2009) I had rebooted the server just before I noticed this happening.

After rereading I think you just need to port forward both ports, 80 and 443 to the NethServer to make DAV work from WAN side. 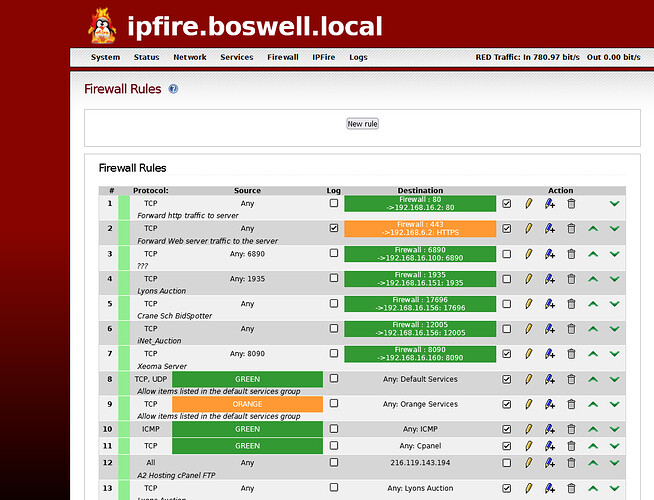 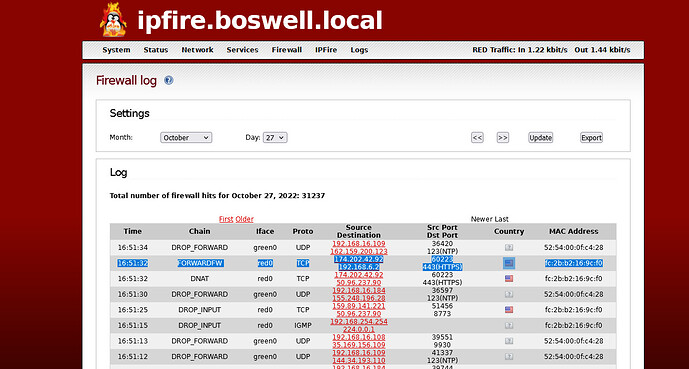 ipfire forward1237×663 184 KB
I can reach the default NS page from port 80 over the external network.
The source address highlighted is my cell trying to connect over the external mobile network.
mrmarkuz (Markus Neuberger) October 27, 2022, 10:17pm #7

To just make it work you could configure the https port forward like the http one.

Also: is there a chance that Nethserver on its own Green interface is having IPFire as gateway? (AFAIK, with the Nethserver RED zone connected to IPFire Orange zone should not happen… NethServer must use only RED adapter to access internet)

Sorry for the delay. I wanted to attempt a network diagram. 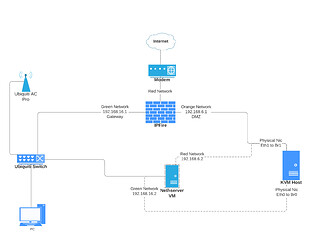 Network diagram3300×2550 308 KB
I hope this provides more clarity than confusion, my first attempt at making one.
@mrmarkuz I did configure the port forward of 443 traffic to the green network and as expected it just works. However, does this negate any protections that the dmz provides. ( I tried to recreate what my previous IT guy had set us up, it was actually IPCop to a Windows server vm.)
@pike Nethserver green is using Ipfire as gateway.
Thank you both for your time.
pike (Michael Kicks) October 28, 2022, 6:46pm #10

IMHO it should not.
Nethserver should use only RED interface for connect to internet, not have a gateway on green (so routing table will use RED interface as main route unless toward green).
And port forward from IPFire red (only) should lead only to orange zone, NethServer RED IP address.

In this situation, as far as i can imagine, the thing goes like this.
-outside device knock to port 443 of IPFire Red.
-according to port forward, it’s delivered to NethServer RED interface.
-then Nethserver answers… via default route, the GREEN Interface.
-Ipfire receive traffic on its green interface; there’s no matching data request, so it forwards all answers to /dev/null.
-outside device got stuck in the dark with no answers

It’s quite hell of a job to do short rule list for orange/DMZ. A simple rule “allow everything” however it will blow up the concept of DMZ and it works but I’m not suggesting to do that at all.
First thing to take note is what the services (ports) are gonna be used from internet, then write service group.
Second one is what services will nethserver need… And if your setup does most internet services and not local one (CUPS, SMB, backup) maybe have NethServer with one green interface but in Orange Ipfire is a better solution.
Hell of a job to workout the whole list of services for IPFire green, but after that, the list for Red is quite a joke…

@pike Thank you sir. I will give it a try. I may have some questions once I get started. When I first put this together I tried to copy what was done previously, but I seem to have screwed that up. What’s strange is that it did work for about a year, I haven’t made any changes to the network or routing in that time… I’m very confused as to what happened… lol

Don’t forget http/port 80, or Certbot won’t like at all your server…

I’m up and running.
Thank you!