I did a data backup last night to my NAS from 6.9 Final, and wiped and installed the current V7 Release.

My previous hostname for nethserver did not have .com or .net at the end and the new V7 requres it, and I need help restoring the data backups. I have many individual tar.gz files for each data backup that was created… maybe 18 to 20 for the most recent backup.

Is anyone able to help me ? I am willing to pay some $ for help if needed… My nethserver has been a mail server for about 2 years so i can sync my local devices to one IMAP account as my email providers inbox size constraints are very small… I only had one email account and it was fetching externally my email from my ISP (Cox.net)

Direct Message or continue here if you would like to help me.

Greatest of thanks.
-Jonathan

so it’s about reconfiguring the new V7 server and importing the old mails.

You may think about changing your setup away from smarthost and getmail via ISP to direct mail server but generally configuring an imap account and a pop3connector shouldn’t be a problem:

For importing the mails you have to extract your backup somewhere. You may use doveadm to import:

Feel free to ask if you need more help…

the only data i need from the backup is my old email data… which i guess leads me to my next question… since I am only using nethserver to fetch mail for one email account and store it locally so my IMAP devices can stay synchronized, is there any good argument to set up the new v7 nethserver in any particular way ? OpenLDAP vs Active Directory ?

I was going to set it up with the hostname as LocalMail.cox.net so that I can create my cox.net email address on there and have fetchmail drop new messages into that mailbox… basically like I had before. 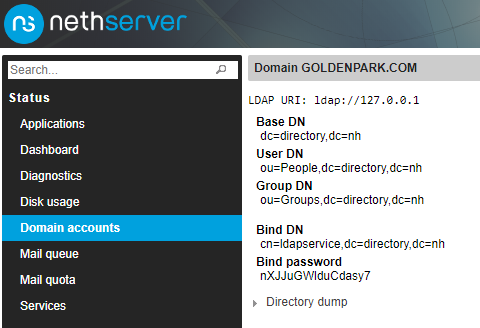 is there any good argument to set up the new v7 nethserver in any particular way ?

One point may be to don’t use smarthost and fetchmail (or getmail) anymore and use direct mailing instead to be independent from the ISP but I don’t know if your ISP supports to enter DNS entries. For your case with one account it’s fully ok to keep everything as it was. Here are just some thoughts about smarthosts and what you could do on your own mail server.

How to get rid smarthost (and use rdns,spf,dkim,dmarc) Howto

I did a howto about all smtp policies you must have with your email server if you want that your emails have a chance to be delivered to the other email platforms (such as gmail, orange, Microsoft…) and not rejected or tagged as spam. I talk about reverse dns (rdns), sender policy framework (spf), DomainKeys Identified Mail (DKIM) and Domain-based Message Authentication, Reporting & Conformance (DMARC). Of course all of this is not needed if you have configured a smarthost to send your email, …

If you don’t need to share files I’d recommend LDAP:

im trying to find the fetchmail log in the new V7 and havent been able to find it yet. any clue where i can find it to diagnose its behavior ?

Tried all 4 choices, pop, pop+ssl, imap, imap+ssl… password is good. is there a way to specify to getmail if it should use secure login or a specific port number ?

is there a way to specify to getmail if it should use secure login or a specific port number ?

Only via protocol but that should be enough.

I think I am narrowing in on my problem… I named my nethserver LM.cox.net

but when i use nethserver diagnostic tab to ping imap.cox.net it pings its self…
so i think that is breaking the function of the getmail… maybe getmail is trying to log onto nethserver to get mail instead of my ISP actual mail server…

What is the right way to make a local someone@cox.net email address on my netsherver that getmail can drop email into without having nethserver route all *.cox.net traffic to its self ?

is there a way to tell nethserver to not point to its self for other .cox.net domains ?
Should I re-install neth and give it a different fqdn ?

You could disable the imap alias which is responsible for pinging your own server. After that change getmail should fetch mail from the right server.

To disable local MX and aliases, access the root’s console and type:

Should I re-install neth and give it a different fqdn ?

No, you can change FQDN when you unbind your LDAP, change the server name and rebind LDAP. As you just have one user it should be no problem.

having trouble getting access to the backup files… i cant seem to get the hostname to be the same as it was with 6.9

it requires a .com or .net and i never had that before… before i only hand one dot… superserver.blablabla

any advice to getting the backup extracted so i can begin to import the emails ?

i found how to use duplicity but have no idea what the gnupg passphrase would have been. is there a way to recover this data ?

Sorry, you have to change the hostname/domainname to have at least two dots now, but it shouldn’t be a problem. You seem to use your providers mailserver so to avoid naming conflicts you should name your Nethserver like LocalMail.internal.cox.net. This way you avoid pinging the own server on imap.cox.net. There’s some discussion about naming as one shouldn’t use “invented” tlds like .local.

I fell at the first hurdle Support

At about the fourth attempt at installation I finally got a root login. Almost the first thing the configurer wanted was an FQDN - which absolutely had to have two dots in it. Mine doesn’t. It’s an intranet, with no accessibility from outside, so the name is neth.mynet. Why can’t I use that? I’ve been running Gentoo with that network name for many years with no problem. What do I have to do now?

i found how to use duplicity but have no idea what the gnupg passphrase would have been. is there a way to recover this data ?

I’ll fire up a Nethserver 6.9 VM and reproduce your scenario to find an easy way to migrate your mails.

In my case Nethesis,1234 as passphrase worked. I could also open the backup files with 7-zip under Windows. I couldn’t extract the files with command line`, this is what I tried, I got only folders:

What I did to upgrade from old NS6.9 backup files to a new installed NS7.4:

so if that command only gave you folders from your duplicity-full.20180215T115508Z.*.difftar.gz file, what is the right command to use to extract it and all the files ?

on windows with 7 zip, i can only extract each of the .gz files into a seperate folder, and each file has its own difftar file… should i put all the difftar files in one directory and then try to use 7zip to extract them ?

from neth shell i tried 'duplicity restore file:///mnt/restore27/servername /home/username/restorefolder
but keep getting prompted for gnuPG key, and i tried Netheses,1234 as well as all the other admin / root pw’s ive used but i only get a 7.6 mb result… and im starting with 196 GB backup files

Sorry, my fault, I found it in the first difftar in snapshot dir:

Does somebody have an idea how to restore as much as possible from duplicity backup when a file is missing in the chain?

Then I put the merged deltas to a file called content

Then I copy the content files to a new location:

Now I can copy the files back to where they were:

Is there an easier way???

How to manually extract a backup set made by duplicity?