We’re already at the end of November and the last months have been very busy since we have shipped NethServer 6.7 but a lot of new stuff are released over the following days and in this period we have closed 36 issues.
So it is time to go and catch up to our development report!

The biggest items during this period include the new built-in filter for SquidGuard, antispam improvement, also as well as visible changes the new multi-WAN implementation and the web interface for policy routing.

It’s really interesting how this feature is born because it’s the result of a great discussion on community that has produced a new configuration for the multi-wan monitoring along with a new interface.
The basic change is that now the “ping IP” (AKA check IP) is global and you don’t need to input one IP for every connection. This also permits to delete the code that tries to auto-detect the right IP and we can also delete the static routes too.
Thanks to @filippo_carletti @giacomo for the implementation and to @adam - @nas for their contributions.
We’re currently debating about how to improve the MultiWan more.

We are releasing a new interface module for managing policy routing rules. Using the actual firewall UI, the user is able to:

Also, in a multi-ISP scenario is a common need to route certain traffic using a specific provider, the firewall was yet able to manage rules now it’s possible to make it directly from the UI

There have been many changes throughout the antispam module, for example the amavisd log_level was increased to 2 to see in the log spam rules that fired. Above all @filippo_carletti has worked hard on using DNSBL to fight spam because DNS block list can be used to block spam as SpamAssassin rules, in addition some DNSBLs limit the maximum number of queries coming from the same IP address so yo overcome this limitation we needed a recursive non-forwarding resolver: unbound was the best candidate.

As always, there have been several changes with a focus on performance. This includes an optimized ntopng since it heavily used redis to save temporary data about host network traffic. In a scenario where there are many hosts involved, ntopng will highly increase redis memory usage. @giacomo worked on using a separated instance of redis only for ntopng, removing the dependency from nethserver-redis, limiting Redis memory usage and avoid useless db dumps on disk.

There have been other many changes throughout NethServer, here are some highlights:

Our amazing testing team outdone itself this time, with this Call for a QA Jam Session we have tested 21 issues, thanks to @adam and @dz00te for the great work! 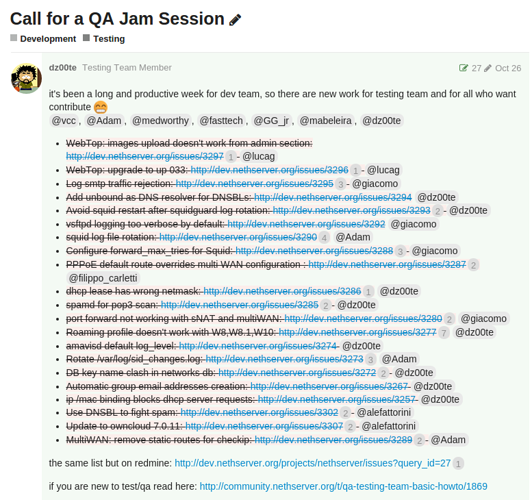 If you have any input on the report, let me know replying below, I hope you enjoyed the read!

[image] @dz00te these are you and @stephdl on your shoulders

@davidep Just an idea, maybe i’m off track here… Wouldn’t be easier to create a meta module that is substitute for dashboard ? This way there is not need to refactor all the code for the dasboard. BR Bogdan

Thanks @stephdl I missed you a lot

I will play with your crontabmanager and I will give you my feedback.

Because you don't read github!

Hi, I want ddclient for a new NethServer, but I can't install because the repository is down. Can anyone help me? Thanks, Marcelo Costa

We should deeply test it and release as ready
1 Like
alefattorini (Alessio Fattorini) pinned globally November 26, 2015, 5:09pm #3
Multi Wan configuration