Hope I picked the right category to post this. I am looking at replacing a few MS servers and was wondering if Nethserver can work as a replacement for them. I have watched all the how to videos. i have Nethserver up and running on a test system. I am just not very fluent in Linux so looking for a little guidance as to how this .

Welcome to the forums and thank you for posting! It would help tons if you had more in detail the services your windows boxes were providing and what you are seeking to accomplish. The current premise of your question is kind of open ended because of how little/much NethServer can do depending on your needs

I’m a IT pro using NethServer to replace a lot (not all) MS Servers.
I’m running everything virtualized on Proxmox, with daily automated backups.
NethServer can replace most services on a MS-Server, except if your client needs a dedicated Windows App.

A doctors: NethServer is acting AD, a Windows 10 is running the Doctors App as a Domain Member.

A Hotel, where the NethServer does AD, Mail, Files etc. A Windows 2016 Server is member in the AD, and provides the Hotel App (With MS-SQL Server).

To Test everything, including backups, we made a restore on a separate proxmox, running on a mac mini (!). The other proxmox used by this client are all HP Proliant Servers…
The App fired up, eventhough completely different Hardware, not even license issues by the App or MS on that Server…

How does that grab you?

There’s not much Nethserver can’t handle, and the forum here is VERY helpful, compared to lots of others! 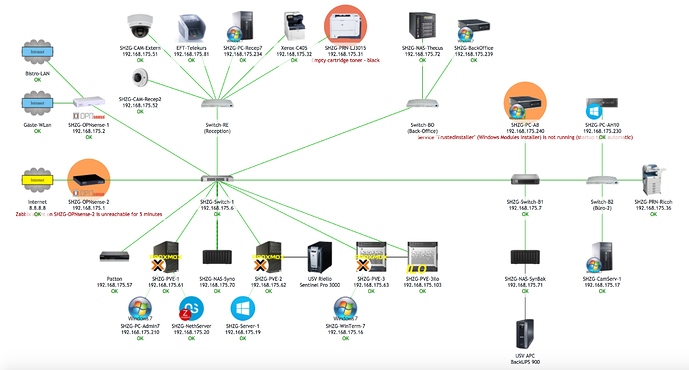 The only real problem I can think of is when you absolutely need multi DC in your environment. NethServer does not support (and unfortunately will not any time soon) multi DC. However, it is possible to implement multi DC as @davidep already had it working (more or less) Active Directory BDC/slave role
As already stated, I think NethServer can take over most of the Windows services, unless the application must run on a windows server.

@robb
Only if it MUST run on an AD, the server can be a member of NethServer’s AD.
Working for 10+ clients…
Without ANY issues, i must add!
NethServer Rocks!

Hi to all, yes, I agree with all that answered already about MS replacement experiences . I also run everything I need (MS, Linux, … ) always and exclusively on proxmox. Like Robb said MS server is irreplaceable when something can only be be run on MSserver or when TermServices are very needed. Regarding MultiDC environment … One customer of mine has 4 remote locations, and I used to run one DC on each of them. As soon as samba4 got so matured , especially by NethServer there is no WinServer any more at neither one location and I’m running only one NetHSerer DC on main location. Since internet links got better and better this company has reliable optical site-to-site links (10/10Mbs … which is rather slow for today links), so all remote clients are being authenticated by this sole NethDC without any problems and delays and access all common resources (mail, nextcloud, …) an this main location anyway. But every remote location has its own file server (debian, freenas, …) that is domain member and one linux (dns, dhcp, …) server that does network stuff … in order not to use NethSDc for internet browsing , this local dns servers have domain forwarders pointing to main NethSDC at the main location. So all remote users access its own fileservers without any delay/latency problems and actually do not notice that there is no local DC. Of course there is a risk when site-to-site link goes down , but sincerely they were almost never down …
Additionally, I gave a try additional remote location that has slow adsl (10/1Mbs) link , a even then there was no delays at all during accessing local file server or login to the remote domain …if all resources (i.e. linux/freenas fileserver) except DC are hosted locally and those resources are joined to the domain , then site-to-site link serves only for authentication/authorization and this really works in real-time and from the performance aspect I recommend this approach without any problems … but of course the risk regarding link-break and not being able to authenticate to the domain still remains … it depends how much it is critical for the client …

Proxmox provides with quick restore for the NethServer (& AD)
Windows can still login using cached Auth, if the line or AD is down for a short while…

@Todd_Sales We are here to give you some pointers. Can you describe a bit more in detail what you currently have, what services you are running and what your intended end result is?
We can help you make a plan so you can have your win servers reliably replaced by NethServer.

The EMail server included in NethServer is basically an IMAP Server.
Groupware functionality, like Exchange provides, would either be using either one of the NextCloud, SoGo or WebTop components of NethServer. These three provide for calender (sharing), adressbooks and much more. Even Active Sync is an option.
Webmail is provided by RoundCube, or one of the three above.

Hope that helps understanding the mail component of Nethserver.

I’d suggest starting off with the site running a 2008 rc2 AD (that’s really dated by now…). The functionality is easier to replace and will give you more confidance to tackle the SBS / Exchange, once you see how fast and easy (and stable!) it is…

As a File Server, maybe Windows is still better, so NextCloud can became a nice alternative. Otherwhise, most of the roles of Windows can be used by NethServer.

Looks like I need to do some reading up about Proxmox. I am overwhelmed with the responses from everyone. I really appreciate the help.

If you need any pointers or are stuck somewhere, don’t hesitate to drop me a PM…

Actually, everyone who replied are ALL Proxmox and of course NethServer users.

I started with VMWare Beta in 1999 and used it 15+ years.
Now, I only use VMWare for exotic stuff, which won’t run on Proxmox, like Novell Netware. And yes, I do have a client still running Netware 6 and 6.5 for legacy stuff running on ESXi. All his current stuff is on a NethServer and other Linux Servers - on Proxmox…

Proxmox is Rock stable! Proxmox has a lot of updates - I run them at production time. No one notices. Once or twice a year (!) Proxmox does need a reboot, but not urgently. When critical stuff have been migrated to another server, you can reboot the server - no downtime for hosted VMs…

Test it out (It’s completly free!) one one or two servers with a NAS, if available, as shared storage.

Hi,
May I ask what software was used for the monitoring, where You took the screenshot?
Thanks

Hi
I use Zabbix for Monitoring, Running on NethServer.

Sry, my earlier awnser was “on the road”…
At all sites (I plan/manage/run about 20-30 sites for customers…) I use NethServer as Main Server and as AD, but NethServer is also running Zabbix.

Before Zabbix, I was a longtime Nagios user, but I didn’t like the direction Nagios was moving, and disliked the fact, that Nagios is not ONE package, but several, from different sources. Each one can break the whole thing in an update / upgrade. Zabbix is one product which works, but you can add in stuff like zB Grafana. Zabbix can do nice Grafiks without ANY other tools!

Projects using Zabbix monitoring are besides Hotels, Doctors and even national DAB Radio is being monitored with Zabbix on NethServer.

See the Howto (Here in this forum) Howto install Zabbix 3.4…

Hello Andy,
Thanks for taking the time, I use Proxmox at most of my customers sites too, also nethserver for a few…
It is always good to hear some use cases where open source software is used in production, most of my fellow IT collegues look at me like I am crazy… Danke aus Tirol!

Zabbix is used by quite a few BIG sized companies, like the German Telekom (For their Business Clients!), the large Swiss Basler Insurance, and quite a few really BIG Institutions and Companies - even quite a few well known in the Industry, like Dell…

And this one’s a Treuhand, also in Switzerland: 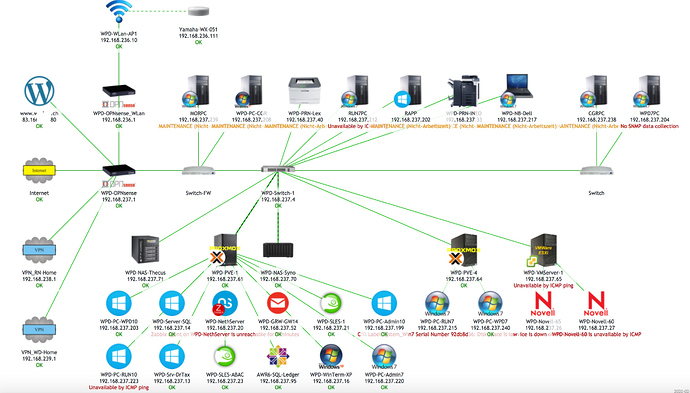 This Zabbix Map is monitoring a Doctors (actually 3!) practice in Switzerland.! 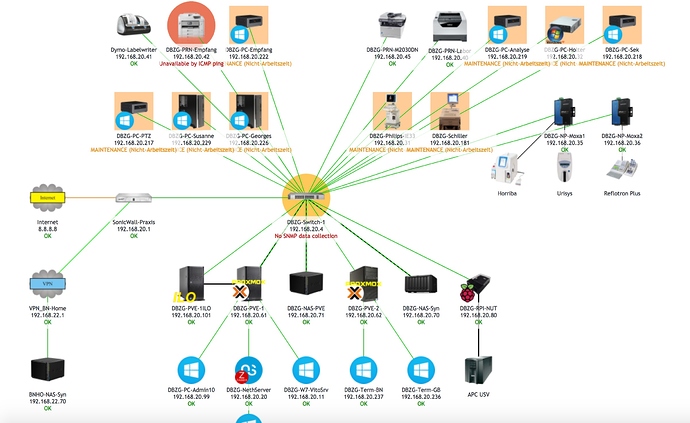 Using a right mouse click on any object offers further detailed screen(s), direct Web-Access to the Admin Web-GUI of the Device, Printer or Whatever.

Thanks everybody. I have been doing a lot of reading the past few days thanks to every ones advice. What is everybody view on refurbished servers?

I still have an old HP Proliant ML110 G6 with 16 GB RAM (from a Client now using a G10 ML350/370) as a playpen for testing stuff… I’m running Proxmox on it. This box is 9 years old, still going sturdy. But I wouldn’t use this in production anymore, 9 years is to old to start a new job!