It seems Santa passed before its normal route here, and leaved an howto @alefattorini asked a lot of time ago. So here’s the BgLUG Project condensed in a virtual lab and an howto on how to configure it.

Configuration of a virtual school lab

This work is distributed under the license Creative Commons Attribution - Share Alike 4.0 International that allows modification, use, copying and redistribution also for commercial purposes as long as it is shared with the same license.

This guide contains instructions for installing and configuring a school laboratory in a virtual environment. It is provided to lab managers or anyone who wants to check out the virtual lab environment for simulation, test, demo, or any other reason.

The school lab is designed in two parts:

The guide was created using Ubuntu 14.04 and 16.04, but the commands should resonably also work on other Debian-based distro.

To create a virtual infrastructure which can support a lab with our configuration, it is essential to install the following tools: Ansible, Vagrant, VirtualBox and Git.

Our solution allows (and in fact requires) to provision server and clients configurations with the help of Ansible.

The playbooks contained within the BgLUG’s GitHub repositories are based on Ansible version 2 branch, so you are required to use at least version 2.0.0, because the repositories contain options which are not available in previous versions. The simplest installation is from the official repository of Ansible via PPA:

WARNING: Vagrant does not support Virtualbox 5.1.x, so it is recommended to install version 5.0.x.

VirtualBox is a virtualization system (technically, an hypervisor) designed for desktop use. It allows virtualization of the i386 and x86_64 architectures.

It is possible to install VirtualBox from official Ubuntu repositories as indicated below (replace trusty with your own version of Ubuntu/Debian: xenial, vivid, utopic, jessie, wheezy):

Then download the GPG keys with the following command if your distro is Ubuntu 16.04 (Xenial) or Debian 8 (Jessie)):

Or the following for all other versions:

WARNING: the latest version of Vagrant (1.8.5 at the time of revision of this guide) has some problems with SSH authentication during first activation. It is therefore advisable to install version 1.8.4.

Assuming that the installer is downloaded as vagrant_1.8.4_x86_64.deb, you may install it with just a double-click or with the following commands:

Install it with the following command:

Install and configure the virtual lab

The WAN network interface will be configured automatically by Vagrant as a NAT interface as soon as the machine is started the first time; we will instead LAN one as a host-only interface with the following as follows: 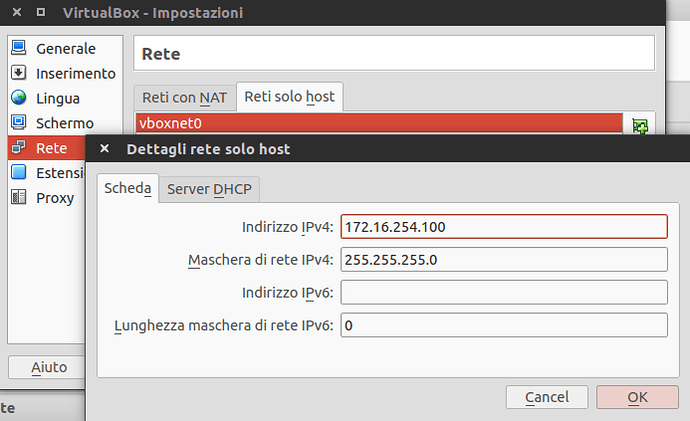 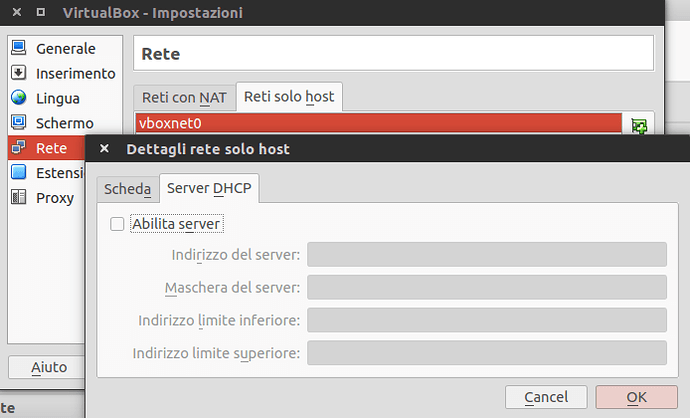 First of all clone the project from GitHub repository:

Then install the Server virtual machine:

With vagrant up you will download an image (a box) containing a working NethServer 6.8 server system already set up to be run with Vagrant. After the download, vagrant up will create a new virtual machine within VirtualBox, name it NethServer and then will provision the virtual machine, setting up networking and SSH access.

FURTHER INFORMATION: Refer to the default password guide within the GitHub repository.

Ansible will configure the virtual machine via SSH starting from the local PC. To simplify, quicken and automatize the configuration, the SSH authentication will use public/private SSH keys.

If you did’t create them already, create a pair of public/private keys with the following command:

It is optional to provide further information asked by the ssh-keygen command. Furthermore, we do not recommend to set a passphrase with this keys, to avoid a passphrase prompt at each Ansible run (security provided with a random-generated 2048bit key length is already much secure than a passphrase by itself).

The requested password is the root user’s one, which, for a Vagrant box, is always vagrant. Please consult the default password guide for further explanation and reference.

From this moment on, Ansible will leverage SSH authentication configured with the amgmt user to authenticate itself and configure the system.

Now run the setup playbook to install and configure several packages within the server, such as SAMBA and PXE environment:

FURTHER INFORMATION: We will clarify the role and the importance of some files within the server-config repository cloned with git:

After completing the playbooks init and setup, open your favorite browser go to the following URL:

Ignore the security warning and login as root. Click on Next button to confirm all of the (standard NethServer) Wizard settings. Once you reached the Dashboard, click the Change admin’s password link, then change it to match the one indicated within the default password guide. This is really important if you want to test Edubuntu deployment within the virtual lab: the admin password must be the one indicated in the guide, unless the client deployment will fail (the machine will be unable to join domain). 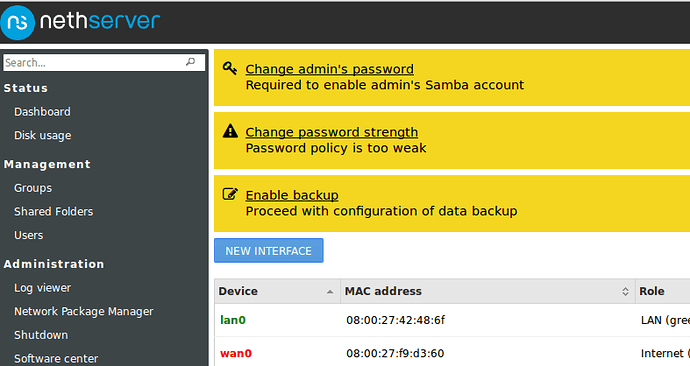 Create then some generic users for the teacher and the student, which will be used to access the client virtual machines.

The teacher account must belong to the docenti (teachers in english) and domusers groups.

The student account must belong to the domusers group.

FURTHER INFORMATION: The server is configured by default with the following four domain groups:

Final configurations for the server

Set the vault password that will allow the automatic domain join for clients virtual machines:

Technically, the vault is a crypted file which contains the Domain Administrator password in plain text format. This file is present in the
client configuration repository (see domainpwd.vault file
within the repository
client-pull-installation). The vault password is the key to decrypt this file, which happens on the client-side each time it starts.

Creating the clients VM: the lab

After the server VM creation, the first step is always to create a teacher machine. After the teacher machine has been created, you have to leave it started and may create the client virtual machines (for the students).

NOTE: Every client is created with a local user, bglug. This user has permission to use sudo with no password prompt. As for the user password, refer to the default password guide.

Define manually a new virtual machine within VirtualBox GUI with the following features:

Then change the following settings:

Enable Network boot in the Boot Options between System options, they are used to start the installation process via PXE 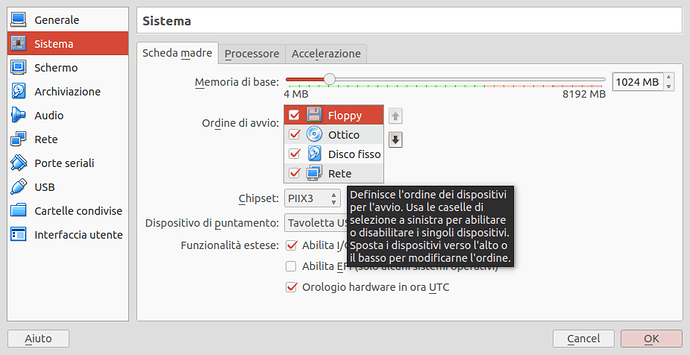 Then on Network options set only the first network card with the following parameters: 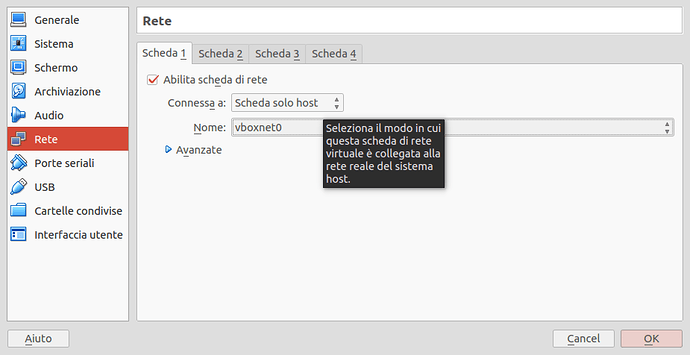 At first start, a menu should appear, in which you can select the voice Installa nuova macchina DOCENTI (Install a new TEACHERS client in english), then 64bit: 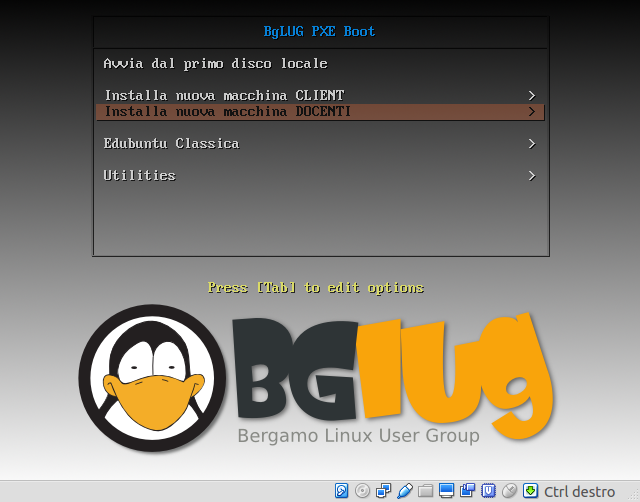 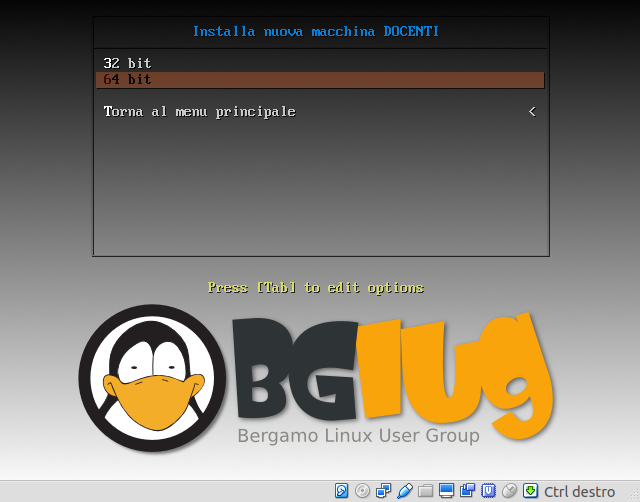 The installation of the teachers’ client will go on automatically. 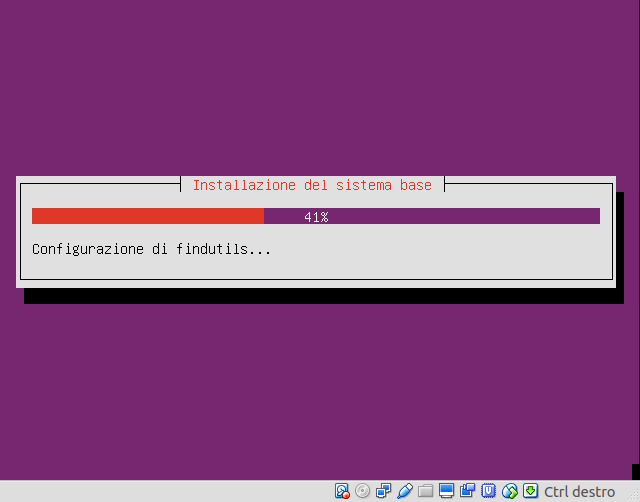 Once the preseed phase of installation will end, the client will reboot automatically twice. During these reboots, Ansible will configure the client and instructs it to join the domain.

When installation and configuration are complete, you can log in with any domain user you configured before (e.g. admin, teacher or student users).

The installation of the client machines, those for the students, is identical to the one for the teachers, with the following differences:

After installation of the other lab machines, you may verify that within Epoptes on the teachers’ PC the newly created machines will appear as active. 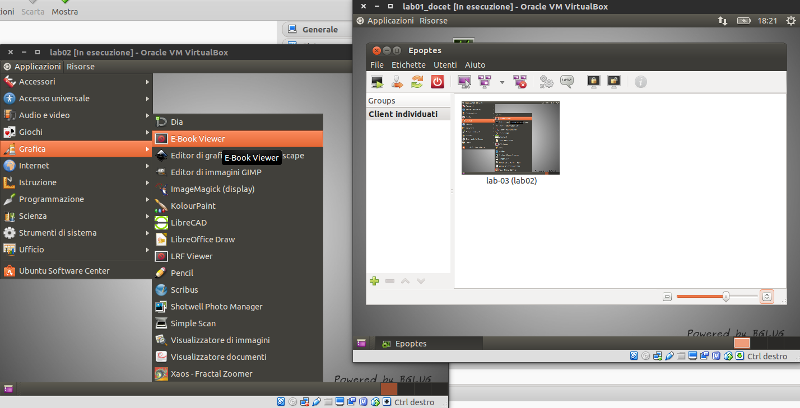 With the VirtualBox version provided within official repos in Ubuntu 14.04 and its Extension Pack, the creation of the server VM with vagrant up will fail:

IMPORTANT: Do not use the version 1.8.5 of Vagrant because of an issue with the key authentication; at some point after the command vagrant up, the following error appears then the setup will go in timeout:

We will appreciate any feedbacks.

And Merry Christmas to anyone here

What should I say? That’s a huge gift from your team to the whole community!
Hope that the @education_team will help you to test it thoroughly. 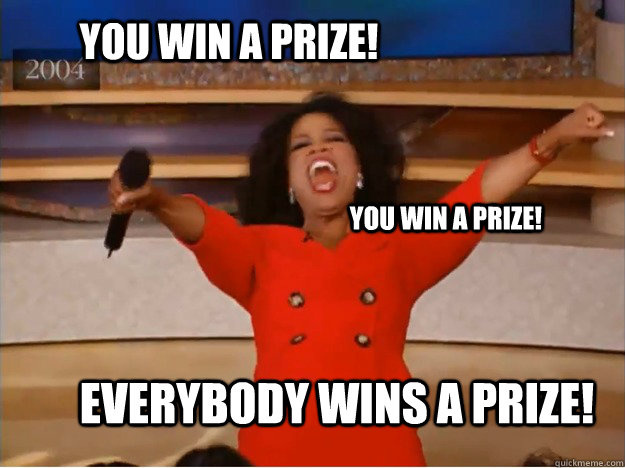 Thnx a LOT @syntaxerrormmm!! I will give it a spin asap…
In the meantime I am busy installing NethServer on a server for a friend of mine. He comes from Zentyal 3.2 that I installed 4 years ago.
I decided to go the ‘easy way’: backup data and reinstall, then install necessary modules and restore data to the samba share.

That’s a great shot for our @education_team how can we consolidate that work in a module?

how can we consolidate that work in a module?

Quite interesting and challenging task

In a lot of modules, you would better say.

I do think I should explain what you obtain once you have built the Server machine and maybe how to change configurations (at least something basic, all is needed to make modifications to our repository is reading the Ansible manual), but then we should review the features and find which one is interesting enough in Educational environments to be implemented with modules.

I know @paspo is working on reversing the Ansible Pull mechanism (from clients that pull configurations from the server and applying it to itself to applying changes pushing configurations from server via e-smith events and a webGUI). This will also mean to rewrite (again) the doraemon daemon (yes, plus @paspo’s forked php_rewrite has a WebGUI already). But that work is long and difficult.

Also something we have to concot is a way to manage localization (you will have clients in Italian only).

Also, we are still working on 6.8. So porting it to NS7 (managing also upgrades) would be a challenge in itself.

I’m doing a short list of roles of the server, but don’t hold your breath waiting